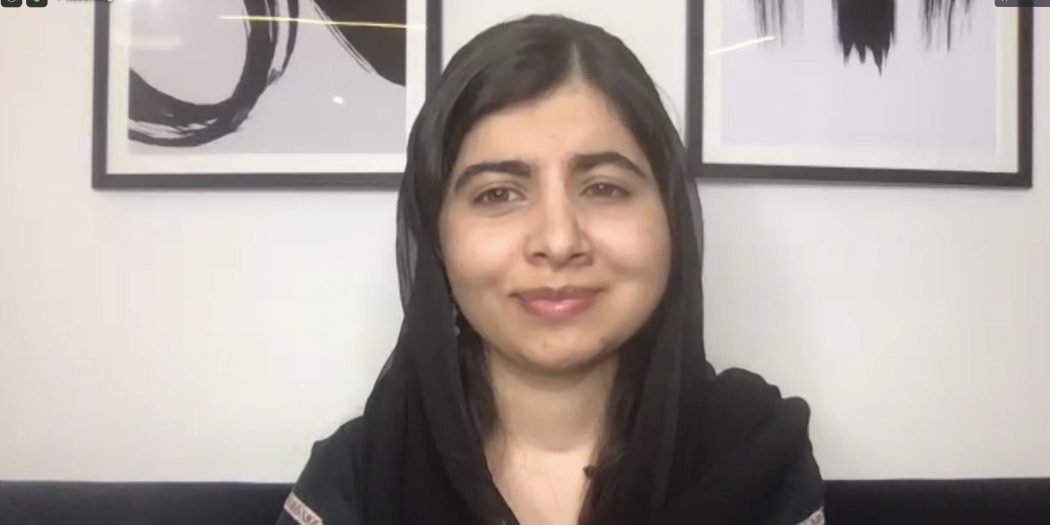 Nobel Prize laureate Malala Yousafzai, the featured speaker at a University of Florida virtual event Wednesday evening, established the Malala Fund in 2014 to give girls the opportunity to access education and to achieve the future of their dreams. (Hope Hathcock/WUFT News)

After years of campaigning internationally for greater access to education for girls, Malala Yousafzai took her final classes at Oxford University like other students everywhere – on Zoom.

A Pakistani who in 2014 became the youngest Nobel Prize laureate, at age 17, Yousafzai these days has moved from fighting with the Taliban in 2009 to speaking about the pandemic in 2020.

Cultural norms and poor infrastructure already had 130 million girls out of school, she told 1,000 people watching a virtual event hosted by a University of Florida organization on Wednesday.

Twenty million more girls may lose their education because of COVID-19, the activist said.

“Where we see economic and political disasters, girls and women are affected the most,” she said.

The Accent Speakers Bureau, part of UF student government, paid Yousafzai, now 23, $100,000 to speak during the hourlong event, according to her contract.

It was the organization’s fourth virtual engagement of the semester, and the most well attended of the eight held in 2020, said Steven Wolf, the bureau’s chairman.

“Ms. Yousafzai is one of the most recognizable and inspiring figures around the world,” he wrote in an email.

When she was 11, Yousafzai began her campaign for girls’ education through an anonymous blog about life under the Taliban. At age 15, a gunman attacked her while on a school bus.

She sought refuge in England and has continued her activism ever since.

Moni Basu, a lecturer at the College of Journalism and Communications and an award-winning journalist, moderated a 45-minute conversation with Yousafzai, followed by a 15-minute Q&A.

The activist said she wants to use the switch to online learning and technological innovations to create new ways to reach the most marginalized groups and students in the most remote areas.

“This pandemic has reminded us of how quickly we can transform the system of education,” she said.

It may be harder while the world searches for a vaccine and to keep more people from being infected or dying to push for better education for girls, but Yousafzai remains undeterred.

“I wanted people to do something for me,” she said. “Today, there are 130 million girls who are asking me to do the same for them.”

Yousafzai is the author of three books: “I Am Malala: The Girl Who Stood Up for Education and Was Shot by the Taliban,” “Malala’s Magic Pencil” and “We Are Displaced: My Journey and Stories from Refugee Girls Around the World.”

Like the rest of the world, Yousafzai followed the U.S. presidential election on TV for four days. She said she was overjoyed that Kamala Harris will be the nation’s first female vice president.

“I was just overwhelmed,” the activist said. “I think it sends a very strong message to women, to women of color, that there is possibility, there is potential for them in politics.”

Yousafzai said Harris is inspiring countless girls, and emphasized the importance of celebrating a woman solidifying her place at the top level of politics. She compared it to her own experience, as a child idolizing Pakistan’s first female prime minister, Benazir Bhutto. Girls having role models allows them to believe that women can be leaders and can be in politics, she said.

“There’s so much more to do,” Yousafzai said. “It’s just the first step.”

The activist said the election of Joseph Biden as president does not mean that the country’s partisan issues are resolved. She expressed hope that Biden is a president for all Americans, and that he continues to embrace inclusivity. Even though the U.S. has a huge voice in the humanitarian realm, she said it also has caused a lot of misery for many families.

During the Q&A, Yousafzai was asked to compare the struggle for women’s education for Pakistan and the Black Lives Matter movement in the U.S. She said she saw at least two similarities in their respective root causes: sexism and racism.

“It’s not just about change in one specific policy,” Yousafzai said. “It’s more than that. I think it is a long, long fight.”

Elizabeth Lossada-Soto, 21, a fourth-year neuroscience student at UF, asked Yousafzai for advice on how to overcome imposter syndrome.

Yousafzai said: All people suffer from it. It’s not a new issue. Just more people are open about it.

After the event, Lossada-Soto said she has admired the activist since first hearing about her as a young girl in Ocala.

“It was so nice to see how humble she was, and how all college students complain about classes sometimes – even Nobel Prize winners,” Lossada-Soto said.

Hope is a reporter for WUFT News who can be reached by calling 352-392-6397 or emailing news@wuft.org.
Previous Masks, Testing, Contact Tracing: Florida Mayors Plead With Governor To Take Action On Virus
Next What Is The Purpose Of A Groundwater Recharge Wetland Park? Alachua County’s Planning Agency Just Approved One