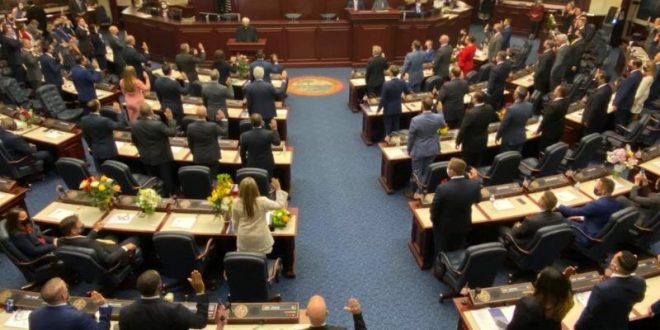 Sprowls will be able to drive policy as the 120-member House has 78 Republicans after the Nov. 3 election, an increase of five GOP seats. (The News Service of Florida)

TALLAHASSEE — Speaker Chris Sprowls, a former prosecutor and the son of a retired New York police officer, told lawmakers Tuesday he has an “open mind” about police and race as he took the gavel to run the Florida House for the next two years.

However, with legislators expected to hear a controversial “anti-mob” proposal in 2021, the Palm Harbor Republican also made clear that he has strong views on law enforcement.

“I do not dismiss nor do I minimize the complicated issues and historical entanglements surrounding police and race in the United States,” Sprowls said after being sworn in as speaker during a one-day organization session of the Legislature. “I recognize that my own experience has its limitations, and that emotions can run high. But passion isn’t the measure of good policy. And when dialogue descends into diatribe when it leads to the vilification of an entire profession, when it becomes a justification for violence and lawlessness, then we have abandoned reason for rage. And that is where we should all draw the line.”

“We cannot blame all of law enforcement for the sins of a few,” Sprowls continued. “We must not take action that puts the lives of Floridians at risk. And we should not allow any government in Florida to defund the police.”

Sprowls’ comments came after months of protests across the country stemming from incidents such as the May death of George Floyd, whose neck was kneeled on by a Minneapolis police officer. While protesters have called for changes in policing, they also have faced a backlash, including from President Donald Trump and many conservatives.

Gov. Ron DeSantis, who attended Tuesday’s organization session in the House and Senate but didn’t address the media, has proposed but not yet filed wide-ranging “anti-mob” legislation that would establish new felony crimes when property is damaged or when people are injured as a result of protests.

The proposal also could seek to establish that drivers are not liable for injuries or deaths caused when they are fleeing for safety from mobs, increase penalties for throwing objects at law-enforcement officers and prohibit state grants or aid to cities or counties that cut law-enforcement budgets.

The proposal has been widely criticized by civil liberties groups and Democrats.

House Co-Minority Leader Bobby DuBose, D-Fort Lauderdale, said Tuesday on the House floor that he rarely agrees with Sprowls on policy, but they have been able to find common ground when talking about their families. Pointing to the COVID-19 pandemic, he also called for Democrats and Republicans to work together.

“COVID has affected members of this chamber in a bipartisan manner. And hopefully, we can address it in the same bipartisan way,” DuBose said. “We left last session touting a bipartisan win for public education. However, this pandemic has shown us that there is much more bipartisan work to be done. During these difficult times, Floridians are hurting more than ever before. And they need us to work together to ease the access to affordable health care, pass the Florida Competitive Workforce Act (a measure that would ban discrimination based on sexual orientation), address the affordable housing crisis, protect our environment, and most importantly, be unapologetic about saying black lives matter.”

Sprowls will be able to drive policy as the 120-member House has 78 Republicans after the Nov. 3 election, an increase of five GOP seats.

Sprowls’ views on law enforcement were among a handful of issues the new speaker outlined during his remarks Tuesday. Other issues included changing how environmental land-acquisition money is used, looking deeper into taxpayer-funded districts and organizations and instilling into primary and secondary schools lessons on “patriotism,” which he argued some people have inaccurately linked to “white nationalism.”

“Patriotism is a rejection of white nationalism and any other doctrine that seeks to divide Americans,” Sprowls said. “Patriotism is an expression of love of one’s country. Teaching our children to appreciate and love the United States of America should be a fundamental and indispensable part of our curriculum in elementary and secondary schools.”

Democrats countered after the session that Sprowls went deep on “cultural war” fervor in his comments but “glossed over” the effects of the COVID-19 pandemic on tax revenues, jobs and health. Democrats have called for months for holding a special legislative session to address coronavirus-related issues such as projected budget shortfalls and problems with the unemployment compensation system. But Republican leaders have refused to hold such as session.

“There were a couple vague references, things we all already know, that the state is suffering,” Jenne said. “But, you know, I heard no direct discussion of approaching 18,000 dead Floridians (from the pandemic). Certainly, heard nothing about unemployment in the millions of Floridians that had to go through that debacle of a process.”

Earlier this month, Sprowls announced plans for a new House committee to look at the state’s response to the coronavirus pandemic and plan for future emergencies.

The News Service of Florida is a wire service to which WUFT News subscribes.
Previous Mike Balken Named Ocala Police Chief After City Council Unanimously Approves Nomination
Next Behind The Screen: Ken Eats Gainesville On Life Before, After Pub Sub Controversy