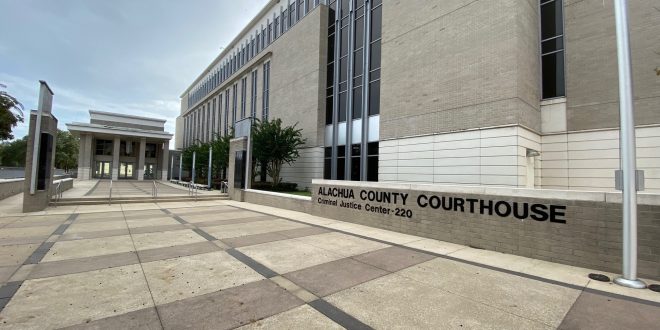 Kenneth Michael Burton has a long list of past convictions to his name.

In 2011, he was convicted of a battery charge and sentenced to 90 days in Alachua County Jail. In 2014, he was involved in grand theft and charged with burglary. He was most recently released from prison in July 2019.

But on July 10 of this year, Burton, 47, was arrested at the Bahama Breeze in Butler Plaza on charges of homicide, aggravated assault, burglary, aggravated stalking, battery and possession of a concealed weapon, according to police. Now, the federal government is involved in investigating the incident as part of Gainesville’s Gun Violence Initiative.

Here’s what police say happened: Burton walked into the restaurant to confront ex-girlfriend, Denise Freeman, violating an injunction for protection against stalking that Freeman filed against him in November 2019. Billy McCall, Freeman’s friend, tried to calm Burton down, but witnesses said Burton proceeded to punch McCall in the face.

According to a nearby witness, Burton then broke into Freeman’s car and stole her 9mm handgun. As a convicted felon, Burton violated the law by carrying a weapon.

When Freeman and McCall saw that Burton was armed, they drove away and said they were shot at as they left. Burton also shot himself in the leg at some point during the altercation, according to police records.

Burton is currently facing state criminal charges in Alachua County’s Eighth Circuit Court. Although he is being represented by public defenders, he filed a pro se motion last month, which would allow him to represent himself in court. The judge on the case did not approve the motion.

Burton remains jailed and is not permitted to talk about the case because of an Alachua County Sheriff’s Office policy prohibiting detainees from speaking with reporters without their attorneys’ approval, even in cases when an inmate wants to talk with a journalist. His public defenders declined to comment on the case proceedings.

Gainesville’s initiative, established in April 2019, brought in the federal government to create a partnership between local, state and federal law enforcement to reduce gun violence in the area, according to Graham Glover, the Gainesville Police Department’s Public Information Officer.

The Justice Department, which prosecutes federal crimes, has greater access to money and resources. The comparative lack of resources at the state level allow the federal government to build a stronger case against Burton. Their involvement in the case could lead to a longer sentence and also removes the option of parole.

Glover said the federal government typically gets involved in local crimes if the case crosses state lines. But in this case, the federal government is focused on controlling the escalating rates of gun violence in Gainesville and the surrounding area by identifying offenders with extensive criminal records.

Gun crimes, Glover said, are classified based on shots fired, cases of attempted murder or burglaries that involve weapons. In Gainesville, gun crime has doubled relative to this time last year, he said.

“End of summer typically sees an increase in crime, this is kind of just common,” Glover said. But we are in the middle of a global pandemic. When a pandemic is happening, jobs are lost, and people are cooped up. These are all factors that contribute to an increase in crime. People have no outlet.”

But over the past few years, instances of gun crime have been occurring statewide. According to data from the Florida Department of Law Enforcement, Alachua County, with a population of 269,043, saw approximately 587 reported firearm crimes for every 100,000 people between 2015 and 2019. Other major counties have also seen a rise in gun crime:

“It’s a problem and it’s not just a localized problem,” Glover said. “It’s prevalent everywhere. I think everyone is interested in ‘What can law enforcement agencies do to help stop these crimes from occurring right now?’”

Federal involvement in local cases is also taking place nationally. It began in Kansas City, Missouri, where “Operation Legend” was enacted by law enforcement in response to the murder of LeGend Taliferro, a 4-year-old boy who was shot in his home.

The federal government has also sent federal agents to cities like Chicago and Indianapolis to help combat violent crime and reduce its growing rates. The ABA Journal reported about 200 agents were sent to Chicago to cooperate with local officials. Nearly five dozen others were sent to Indianapolis in August, according to the Associated Press.

Pamela Marsh, a former U.S. attorney for the Northern District of Florida, said it’s a good thing when federal, state and local law enforcement can work together.

“We want law enforcement agencies to be able to work together and share information,” Marsh said. “It only makes us safer.”

Considering Burton’s extensive criminal record, Marsh said, the state and federal government are likely working together to determine which can achieve the longer sentence.

“Because this guy had both of those — both prior convictions and possessing a firearm — it made it highly likely that this was going to be a person the feds were going to want to prosecute,” Marsh said.

While Marsh said she understands that tougher sentences may serve to reduce crime in the community, she said a lot needs to be done to improve the criminal justice system in the U.S.

“Just a year or two or three ago, there was great bipartisan support in Congress for criminal justice reform that has more recently been pushed to the side,” Marsh said. “But I hope at some point, they will come back and look at that.”

Back in 2018, President Donald Trump signed the First Step Act, a law which sought to improve the criminal justice system by reducing recidivism rates and decreasing the size of the federal prison population. According to an NBC News article published in 2019, the First Step Act led to the release of more than 3,000 inmates and reduced sentences for approximately 1,700 people convicted of cocaine offenses.

Still, Marsh said, the country houses more people in prisons than any other industrialized country in the world. One reason for that, she said, is the lack of resources for rehabilitation and mental health that would otherwise permit former felons to successfully return to society.

“It shouldn’t be a foregone conclusion that once you commit a crime and go to jail that your life is ruined forever,” Marsh said.

Art Forgey, the Alachua County Sheriff’s Office Public Information Officer, said when it comes to people with an extensive history of offenses, federal involvement might be the only way to prevent crime.

“I think that when you see these cases get adopted over into federal court, this suspect will have a lengthy history of criminal behavior,” Forgey said. “At that point in time, you kind of have to look at it and say ‘We may not be able to rehabilitate this person.’”

According to records from the Alachua County Sheriff’s Office, Forgey said their department in 2019 saw 49 crimes involving guns between January 1 and October 6. The office in 2020 has seen 76 cases in the same period. The data, he said, does not include cases that fall under the jurisdiction of other law enforcement offices in the county.

“The increase in violent crime and gun crime goes to tell me that what we’re doing is not working,” Forgey said. “Maybe let’s try something a little more strict and try to send a message that we’re not going to tolerate this and that we’re going to use all the resources that we have.”

For Burton, the next few months will entail back and forth court appearances at the Alachua County Circuit Court and the U.S. District Court to hear the outcome of his case. If found guilty, the federal and state government will suggest what they believe is a proper sentence.

Nicole is a reporter for WUFT News who can be reached by calling 352-392-6397 or emailing news@wuft.org.
Previous Florida Democrats Taking ‘Long, Hard Look’ After Losses
Next Climate Change Resource From UF IFAS Focuses On The Facts