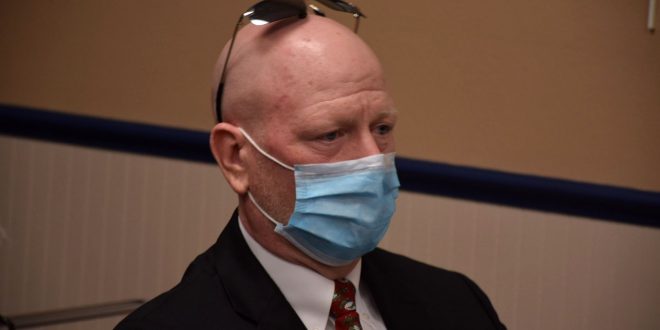 Michael Hickman listens to the fate of his educational career being decided. (Christopher Cann/WUFT News)

Marion County School Board Terminates Administrator For Medical Marijuana Use

Michael Hickman arrived at the most important school board hearing of his life on time, wearing a black suit, a mask and a red tie embellished with the insignia of the Marines Corps.

Wednesday’s hearing was the bookend to about 10 months of battle focused on the legitimacy of Hickman’s firing in December after he tested positive for marijuana use. The district has since argued that continuing to employ someone who uses medical marijuana jeopardizes its federal funding, even though the usage is permitted under Florida law.

The hearing ended with the Marion County School Board unanimously voting to terminate the veteran and former dean of Belleview High School.

This decision arrived more than two months after Judge Susan Van Wyk recommended Hickman’s termination to the school board following an administrative hearing.

Beginning the hearing, each side was given 15 minutes to state their case. Mark Levitt, the attorney for the superintendent went first and restated the purpose of the hearing. He said the case is not about Hickman’s military service or his reason for marijuana use, which is to treat PTSD. Instead, it is merely about whether Hickman violated school board policy, he said.

Mark Herdman, the Clearwater attorney representing Hickman, addressed the school board, asking its members to use their judgment instead of mindlessly complying with the recommendation from the administrative law judge.

“You decide whether he gets fired,” he said. “Nobody else.”

Once the allotted 15 minutes were up for both sides, the school board members began deliberation.

Board member Nancy Stacy began by claiming that the policy Hickman violated by taking his prescribed marijuana is obsolete.

“When a bureaucracy is wrong, it should not punish the little man,” she said. “This body failed our employees.”

Stacy said she did not understand the effect the gap between federal and state policy would have on Marion County Public School employees. She said she became aware of the issue when Hickman became the scapegoat against medical marijuana use.

Board Member Beth McCall agreed with Stacy’s assertion that the school board policy is contradictory. Others, like board member Kelly King, noted that federal law trumps state law. King also reiterated that Hickman did not notify anyone of his medical marijuana use, which is also against school board policy.

After about 30 minutes of debating, School Board Chair Eric Cummings asked that the focus remain on Hickman and not potential policy changes.

“We are going down rabbit holes,” Cummings said.

Stacy motioned for a 20-day unpaid suspension, which failed to gain any support. King mentioned the possibility of resignation in lieu of termination, which would be less severe on Hickman’s personnel file than a termination.

After about an hour of deliberating, it was time to vote. Hickman was stoic during the hearing, with his elbows on the table and hands intertwined in front of him. As proceedings wrapped up, his legs began to bounce up and down from the balls of his feet.

All five school board members voted to uphold Judge Van Wyk’s recommendation. Stacy said she concurred because Hickman said he would not stop taking his prescribed marijuana if his position was reinstated.

The bureaucratic plight centering around Hickman began in November 2019 after he sustained a shoulder injury breaking up a fight between two high school students. He was then asked to take a routine drug test, which he failed. Despite having a valid medical marijuana license since 2018, he was suspended and placed on paid leave.

Hickman acquired a medical marijuana license to treat pain and PTSD. Both are related to his time in the Marine Corps during Desert Storm in the early 1990s.

Hickman declined to comment on the outcome of the hearing or what he plans to do now.

“This is another unfortunate decision by the school board,” Herdman, his attorney, said after the hearing.

Hickman walked out of the meeting room and into the parking lot. He embraced Herdman before thanking him for everything and walking to his car.

He was an employee of the Marion County Public School system for nearly 20 years.

The decision made by the school board sets a precedent for future cases in Marion County. But, a change to its drug-free workplace policy, as heavily discussed in the hearing, is a possibility. An amendment to the current policy would clarify the school board’s stance on medical marijuana use by employees and, while it would be too late for Hickman’s career with the district, could also prevent any employees in the future from being caught in the gray area between state and federal policy on medical marijuana use.

Christopher is a reporter for WUFT News who can be reached by calling 352-392-6397 or emailing news@wuft.org.
Previous Yes, It Is True: Florida Ran A Smooth Election
Next Gainesville Activists Rally In Favor Of Counting Votes And To Urge Action Post Election