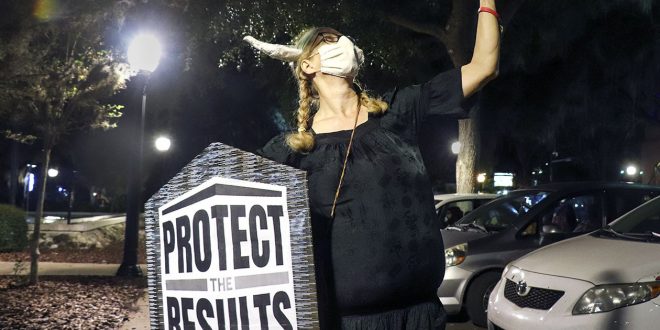 Sarah Younger, 61, poses with her "protect the results" shield in front of Gainesville City Hall before the Continue the Fight rally. She said she made her costume with materials she had around her home. (Chasity Maynard/WUFT News)

More than three dozen people met in front of Gainesville City Hall on Wednesday evening to challenge President Donald Trump’s efforts to contest the presidential election results, and to demand that Joe Biden remember what’s really at stake should he move into the White House.

The local branch of Socialist Alternative, a national organization focusing on workplace and community injustices, began planning for the event a month ago in case Trump sought to “steal the election,” said Sean Trainor, one of the organizers.

“That has, to an extent, played out,” said Trainor, 35, of Gainesville and a native of New Jersey.

“We wanted to get folks organized and start building momentum for possible protests,” he said.

The Gainesville event mirrored protests happening across the country Wednesday. Calling on election officials to “count every vote,” protesters marched through the streets in several U.S. cities, including Minneapolis, Portland and Phoenix, according to the New York Times.

More than 24 hours after polls closed, the presidential election results were still undetermined.

The president won Florida, though the former vice president won Alachua County by more than 25 points. The county is surrounded by others that went to Trump, and he gained massive support in South Florida from Cuban Americans who primarily feared that Biden supports socialism.

The activists expressed concern that Trump falsely said he won the presidential election in a speech early Wednesday, despite the millions of votes still to be counted at the time. The president has since mounted a legal campaign to challenge Democratic wins in key swing states.

High Springs artist Sarah Younger, 61, spoke on behalf of Sierra Club Florida. She came with an outfit for the occasion, including a shield stating “PROTECT THE RESULTS” and an operatic costume with Viking-style horns to signal the counting was “not over until the fat lady sings.”

“This is not a time for us to have a decision selected by a Supreme Court justice like we did in 2000,” Younger said.

Fi Stewart-Taylor, a UF Graduate Assistants United union organizer, was among those insisting that issues like Medicare for all, housing, racial justice and the Green New Deal still matter.

“No matter who is in the White House,” said Stewart-Taylor, 28, “our real fight is to make sure that in our communities everybody’s fed, everybody’s safe, everybody’s housed, everybody has what they need to have to live a good life.”

Gainesville Socialist Alternative member Jyotir Kulmacz, 38, of Gainesville, said while he doesn’t want Trump to win, it’s not entirely ideal if Biden does.

“The main focus of our event is to make sure that Joe Biden and the Democrats are beholden to the American people,” Kulmacz said.

He also said the community must work together to steer the power in its direction.

“We have to work together as a community, as working class people, to hold the establishment’s feet to the fire, and make sure that we are heard,” Kulmacz said.

Chasity is a reporter for WUFT News who can be reached by calling 352-392-6397 or emailing news@wuft.org.
Previous Marion County School Board Terminates Administrator For Medical Marijuana Use
Next Children’s Trust of Alachua County Hopes To Create Better Community Services Through Interdependency