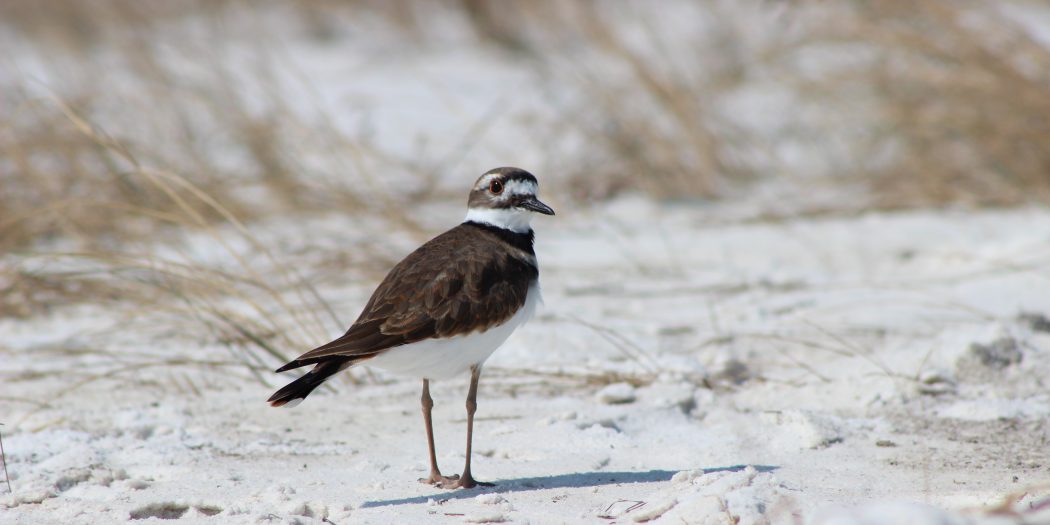 A shorebird, called the killdeer, pauses from foraging along the water's edge in the Navarre Beach Marine Park. (Brittney Miller/Fresh Take Florida)

Though a grave for destroyed wild plants, the pearly smooth sand left behind has an upside: It presents perfect nesting sites for the region’s shorebirds.

Some impacted plots amount to only a couple acres. Others are too expansive for officials to estimate their breadth yet, like within portions of the Gulf Islands National Seashore.

Dunes in a trio of the park’s sections – the Fort Pickens, Perdido Key and Santa Rosa areas – were intermittently flattened by the storm, said Kelly Irick, the park’s natural resource manager. The National Oceanic and Atmospheric Administration captured these breaches via satellite images, which show some park sections once claimed by vegetation and dunes that are now reduced to white balloons of open sand.

“These sorts of tropical storms are beneficial to the habitat for these birds, which of course is a huge component of their natural history,” she said. “You certainly want that cycle of habitat overwash to create this white sand habitat. It’s a dynamic system.”

Above: A set of National Oceanic and Atmospheric Administration satellite captures shows the transformation of a section of Gulf Islands National Seashore in the Florida Panhandle.

However, timing is everything. If a hurricane takes place during nesting season, which spans from February to September in Florida, populations will sustain more negative impacts. Hurricane Cristobal wiped out 50% of Audubon Florida’s monitored nests this summer, Stahala said.

“Since Hurricane Sally occurred after the breeding season was complete, these impacts were avoided,” said Nick Vitale, a northwest regional shorebird biologist for the Fish and Wildlife Conservation Commission. “However, hurricanes also have the potential to negatively impact adult birds in the area and even reduce the breeding population in the region after the storm.”

Navarre Beach Marine Park, one of the most diverse shorebird presences in Santa Rosa, emerged from the hurricane with two acres of exposed sand, Stahala said. Nearby, on the Navarre Beach Causeway, she reported another acre of scoured vegetation. Altogether, she estimated that Sally impacted 10 areas she monitors for Audubon Florida – and said she hopes these transformed areas host nesting sites come spring.

But even with these seemingly ideal habitats, it doesn’t necessarily mean they will be home to chicks and eggs next breeding season. Shorebird populations have generally stayed stagnant or decreased throughout the years, Stahala said, so there might not be enough breeding birds to fill these new open areas.

“We’re seeing declines, and a lot of it is habitat related,” she said about the shorebird populations. “We’re not seeing improvements.”

One federally listed and at least four state-listed shorebird species frequent Panhandle shorelines, Stahala said. While she said she’s hoping these endangered birds will take advantage of these new nesting sites, total impacts to breeding populations can’t be confirmed until the season begins.

Shorebirds are outliers when it comes to benefitting from massive hurricanes: Storm surge isn’t beneficial for most species. For every flattened dune that creates ideal shorebird nesting areas, it destroys another animal’s habitat. The critically endangered Perdido Key beach mouse or sea turtles don’t fare as well, since these species rely on healthy dunes and the vegetation that stabilizes them.

The duality makes it harder for researchers to manage and protect all beach-dwelling species equally as different available habitats shrink, Stahala said.

“When we talk about habitat, we used to have an Olympic-sized pool where everyone has space to live in it,” she said. “And now, we’re getting squeezed to the point where we’re working on a hot tub scale, and each animal that used to live in the gigantic Olympic-sized pool has to fight for their own little piece of habitat within that.”

This story was produced by Fresh Take Florida, a news service of the University of Florida College of Journalism and Communications. The reporter can be reached at bmiller@freshtakeflorida.com

Brittney is a reporter for WUFT News who can be reached by calling 352-392-6397 or emailing news@wuft.org.
Previous The Point, Oct. 27, 2020: U.S. Senate Confirms Amy Coney Barrett To Supreme Court
Next Voter Turnout Could Approach 1992 Mark