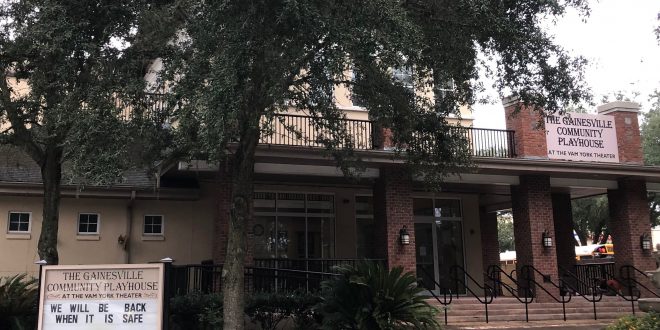 The Gainesville Community Playhouse closed its doors on NW 16th Boulevard due to COVID-19. The theater’s president, Joseph Keena, said it aims to host an in-person show as early as December. (Franki Rosenthal/WUFT News)

‘None of Us Are In the Same Place’: Theaters Improvising To Stay Active Amid COVID-19

Steven Butler says he tried to keep the Actor’s Warehouse open in Gainesville for as long as he could. The old church doors had been shut since March, and with little income coming in, the community theater had exhausted its options to maintain the space.

“Coming up with funds and a large amount of rent on a monthly basis was hard,” said Butler, of Sarasota, a founding member and the theater’s artistic director. “That’s how we made the decision to move on and be more of a nomadic or touring company.”

Actor’s Warehouse is one of many community theaters struggling to survive amid COVID-19.

“There are hundreds of theater companies throughout our country who do not have a home, who have never had a home, and they are thriving,” Butler said.

Based on an analysis in August from the Brookings Institution, a national think tank in Washington, the pandemic has caused an estimated loss of 2.7 million jobs and more than $150 billion in sales of goods and services for creative industries nationwide.

Despite this massive loss, theaters across northern Florida are doing what they can to produce shows and keep the industry intact.

The Acrosstown Repertory Theatre in Gainesville was rehearsing for a new show when it closed in March. The theater used its space for a virtual gala, recording a small group of singers who were socially distanced, board member Monica Cross said. The board, however, decided that continuing to have a lot of people in a small space was not feasible.

“We have started with some informal Zoom performances that we stream to Facebook, like drunk readings of Shakespeare plays, where people can interact at home,” Cross said. She added: “We feel very strongly that it is important to keep our volunteers, actors and audience all safe.”

At The Hippodrome State Theatre in Gainesville, artistic director Stephanie Lynge is the only employee working on its third floor these days, with most of her colleagues doing so from home. All of the theater’s productions are filmed, edited and streamed online.

“Nothing has gone back to normal, not a single, solitary thing,” Lynge said. “Everything is done remotely and safely, but none of us are in the same place. It’s heartbreaking.”

The Florida Theatre in Jacksonville has also faced hardships since closing March 12, losing over 100 performances and about $4 million, according to its president, Numa Saisselin. The theater has survived due to money granted from various state and city relief programs, he said.

It has hosted a few virtual events with its prior artists, but with limited success.

“We made money in each of them, but I’m talking a couple hundred dollars,” Saisselin said. “It’s nothing to write home about.”

For many community theaters, the pandemic has demonstrated how essential arts, culture and live entertainment are to society, which is why Saisselin is eager for his to reopen in December.

“People are craving to be around each other and want to be together in a social setting,” he said.

The Gainesville Community Playhouse hasn’t done anything online, but it plans on producing two small shows with limited runs in December and January, with a full season hopefully beginning in March, said its president, Joseph Keena.

Keena said his venue will take every precaution necessary.

“We’re designing it straight through with no intermissions to emphasize the safety and social distancing aspects,” he said.

Rhonda Wilson, founder and executive director of the Star Center Theatre in Gainesville, is doing what she can to host live performances in front of a socially distanced audience.

“We are gearing up to do smaller performances in person, so the actors backstage don’t feel too crowded, and so our audience feels comfortable,” Wilson said.

She said the pandemic has forced her to be more creative in keeping people interested in theater.

“There’s nothing that replaces live theater, but now we have to realize that not everybody is coming back,” she said. “We had a whole season planned, and we had to go back to the drawing board, and refocus how to fit in smaller shows and get people comfortable to come in.”

As for the Actor’s Warehouse, Butler said the hard decisions won’t end once the pandemic does.

“I am excited to get past this thing called COVID, and see how we will continue to produce engaging productions and reach a larger audience than before,” he said.