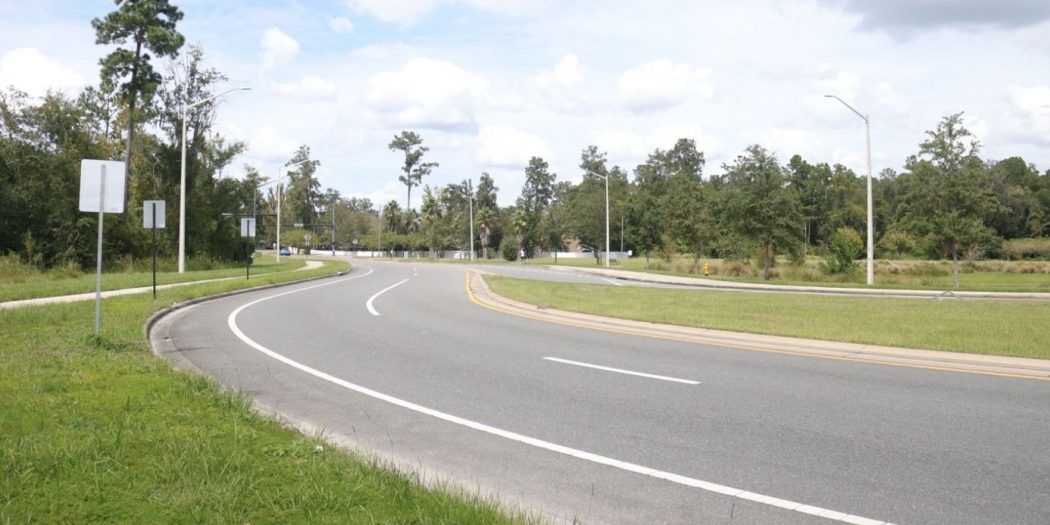 The new road begins at the end of Southwest 52nd Street. It will be used to extend 62nd Boulevard. (Alexa Mickler/WUFT News)

Gainesville Will Build A New Road Paralleling I-75 In The Coming Years, But First It Needs The Land

The path to a new north-south corridor on Gainesville’s western edge is, for the moment, paved with land acquisition hurdles.

The Florida Department of Transportation and City of Gainesville plan to construct a new road that will extend Southwest 62nd Boulevard to Clark Butler Boulevard. It is currently scheduled to begin in the winter of 2021 and be completed in early 2023. The project also includes the repaving of 62nd Boulevard between Newberry Road and Southwest 20th Avenue, set to begin in the first quarter of 2021.

Gainesville City Commissioner David Arreola said, “By this time next year, 62nd will have been completely fixed.”

While the repaving of 62nd is to patch potholes and cracks that have for years made the road unsafe, the reasons for the extension of the road are:

“Every year we have people die on that stretch of I-75” between Archer Road and Newberry Road, Arreola said. He believes this project is the best option for solving the road issues facing the community.

However, not all of the land necessary for the project has been acquired.

Property owners in Arreola’s Southwest Gainesville district have been contacted by the state about purchasing their land. FDOT is in the process of getting rights to these privately owned properties where the road is expected to be built.

Arreola said this is “just sort of a process that has to be played out.” He seemed to not be worried about acquiring the land.

“The administration has to process the files for acquisition and payment,” he said. “I’m sure some of the property owners want to negotiate, get their own appraisals and whatnot.”

It may not as simple for some. Al Kamlah owns a total of 16 acres of land next to the interstate. He has owned one of the properties since 1988.

“I have to sell the land if the DOT decides they’re going to put the road right through the middle of it,” he said. “They just take it from you.”

He will likely have to settle with the state by January or go to court to fight for the property.  He currently has an eminent domain attorney handling negotiation.

“I wish they would never have decided to put the road in from the beginning, but that’s over and done,” he said. “I’m 82 years old, so I don’t really want to get into it.”

Kamlah said he will put the property in a trust for his children and grandchildren — that’s if the state does not take the land.

Another property owner, Wilburn Rowland, said he was contacted by the state about six months ago. He did not accept the first offer he received and has not heard back since.

Other neighbors, including the Everett family, have also been contacted. According to Rowland, Erie Everett’s four children are handling the matter.

Frank Everett confirmed the state was involved but would not comment further.  The Everetts may currently be negotiating with the state, but Rowland believes they also do not want to sell.

City of Gainesville spokesperson Rossana Passaniti said the land is “on schedule to be acquired by the second quarter of 2021.”

It will cost over $6 million to acquire the land, according to preliminary FDOT documents.The land acquisition is not the only hurdle, as funding sources for the roadway may change due to the COVID-19 pandemic.

The repaving of 62nd Boulevard is estimated to cost $2.1 million, and funding for this comes from the local option gas tax.

With people traveling less and using less gas during COVID-19, Arreola said it is “absolutely” possible the project’s funding will be affected by the pandemic.

Still, the project is continuing for now.

“There are concerns with all government revenue with COVID-19, but currently, we don’t have any reason to change the project,” the commissioner assured.

John Veilleux, the project’s supervising engineer, said, “I would assume that COVID-19 has had an effect on the local option gas tax, but I don’t expect it to impact this project.”

Arreola believes the project will still move forward with other options of funding if necessary.

“We will find other local sources that we can use like traffic impact fees and the transportation mobility program area,” he said. “There are other avenues.”

The construction of the new road will cost $17.6 million. State and federal grants will fund $14.7 million. The remaining amount will be covered by local sources, similar to the repaving part of the project.

While Arreola believes the most challenging part is over, construction cannot begin until the land is acquired.

Rowland is not interested in giving up his home.

“They want my house,” Rowland said. “They just want to steal it,” he laughed.

Alexa is a reporter for WUFT News who can be reached by calling 352-392-6397 or emailing news@wuft.org.
Previous Server Configuration Caused Florida Voter Registration Crash
Next Senate Looks To Experts For COVID-19 Planning