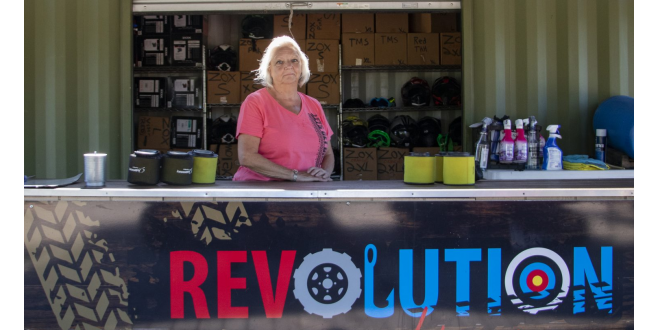 Audrey Jowett stands in front of the safety equipment collection area of Revolution Off Road on Thursday, May 11, 2020. Kevin, Audrey's husband, has been in the United Kingdom for 12 weeks instead of 15 days as he originally planned. (Lauren Witte/Fresh Take Florida)

Foreign Business Owners In US Caught In Travel Limbo Over Pandemic

ORLANDO, Fla. – Suzie Wells was reluctant to leave her husband in Boca Raton after he was released from the hospital following a severe asthma attack. With her mother suffering kidney failure in London, her husband assured her that she should be with her mother for her last days.

After a week in London, which concluded with her mother’s funeral, Wells bought a ticket to Miami only to be turned away by an immigration officer at Heathrow airport who denied her boarding on the basis of President Donald Trump’s travel ban.

Wells is a British citizen and lives in Florida on an E2 visa, which grants non-U.S. citizens and their families temporary residence status in exchange for running a business. Such visa holders are supposed to be allowed to leave and return to the U.S. without problems.

But when Trump issued a travel ban to stem the spread of coronavirus, those new restrictions didn’t account for E2 visa holders who were outside the U.S. One legal expert estimated as many as 1,000 people were left suddenly stranded overseas – separated from their families and the businesses the U.S. government was encouraging them to operate.

The problems illustrate how a global pandemic can unexpectedly complicate international transit and the economy, stranding helpless travelers far from home and at the mercy of governments overwhelmed and distracted by the health crisis.

For more than three months, Wells sought desperately to get back home to her husband, whose doctor said he should not be living alone with his asthmatic condition. Her husband is also an E2 visa holder, working at an English publishing company.

The State Department said any foreign national with an urgent need to travel is encouraged to contact their nearest embassy or consulate if the situation is an emergency. For Wells, her initial emergency request was denied, despite letters from her husband’s doctor. But the department later made it possible for Wells to return home on June 16.

Charles Kuck, an Atlanta-based immigration lawyer, estimated at least 1,000 people could be experiencing similar problems, based on State Department figures showing that it issued 63,178 such visas last year.

“Frankly, (the government) doesn’t care because they’re more interested in stopping legal immigrants from coming in than they are about the economic consequences of doing so,” Kuck said.

Another E2 visa holder, Kevin Jowett, has been stuck in the U.K. since March 14, after his appointment to renew his visa was canceled on two separate occasions.

He applied for an expedited visa twice, and the offices of Sen. Rick Scott and Rep. Ross Spano contacted the embassy on his behalf. All were told that the embassy was not making appointments.

His wife, Audrey, remains alone in Clermont managing their business.

The Jowetts own Revolution Off Road, an adventure park west of Orlando that employed 13 Americans, but four lost their jobs during the coronavirus shutdown. Jowett said his former employees could make more money from unemployment benefits than they could working part time since the business only operates three days a week while he is away.

Jowett said he risks losing a contract to open a second park location, where he hopes to employ three or four more people.

Jowett is frustrated after living in Florida for 13 years now. He considers the U.S. his home, but said he feels ignored and neglected by the U.S. government, even though he pays taxes, creates jobs for Americans and contributes to the U.S. economy.

While Jowett has been away, his wife fell ill and now needs neurosurgery. He has applied for two more exceptions to return to his wife, but the embassy denied both.

He applied under an exception announced last week that allows certain business travelers, investors, treaty traders, academics and students from the Schengen Area, United Kingdom, and Ireland into the U.S. if they qualify. He is still waiting.

Another UK citizen, Jeff Temperley, and his daughter have been unable to return to Panama City Beach since January. Complications with the visa renewal process left them trapped outside the U.S. by the travel ban.

He said he feels like he lives a nomadic existence in which he does not belong in the country where he was born or the county he now calls his home.

Temperley owns a restaurant and a food truck, but his family was forced to sell their businesses and is preparing to move back to the U.K. He said no dream was worth his family being separated.

Jowett and Wells said they were outraged to learn that English golfer Matt Fitzpatrick was granted a visa at the end of May to compete in the PGA golf tournament in June.

“I’m not a sportsman who might come to the U.S., win a few million and take it out of the country,” Jowett said. “I’m contributing to the U.S. economy, and I can’t even get an interview. It’s disappointing.”

Meanwhile, the U.S. Embassy in London remains effectively closed despite the government there easing lockdown restrictions throughout the country.
___

This story was produced by Fresh Take Florida, a news service of the University of Florida College of Journalism and Communications. The reporter can be reached at ljohnson@freshtakeflorida.com

Lauren is a reporter who can be contacted by calling 352-392-6397 or emailing news@wuft.org.
Previous The Point, July 20, 2020: The Debate Over A Development Moratorium In Some Gainesville Neighborhoods
Next Florida Moves Ahead With More Electric-Vehicle Plans: Will Investment Pass By Poor, Minority Communities?

What Will Be Forever Changed As a Result of COVID-19?

Republican Florida Gov. Ron DeSantis said he will push to get the annual football game between Florida State and the University of Florida rescheduled, saying Thursday that keeping the famed rivalry going will be good for the state.