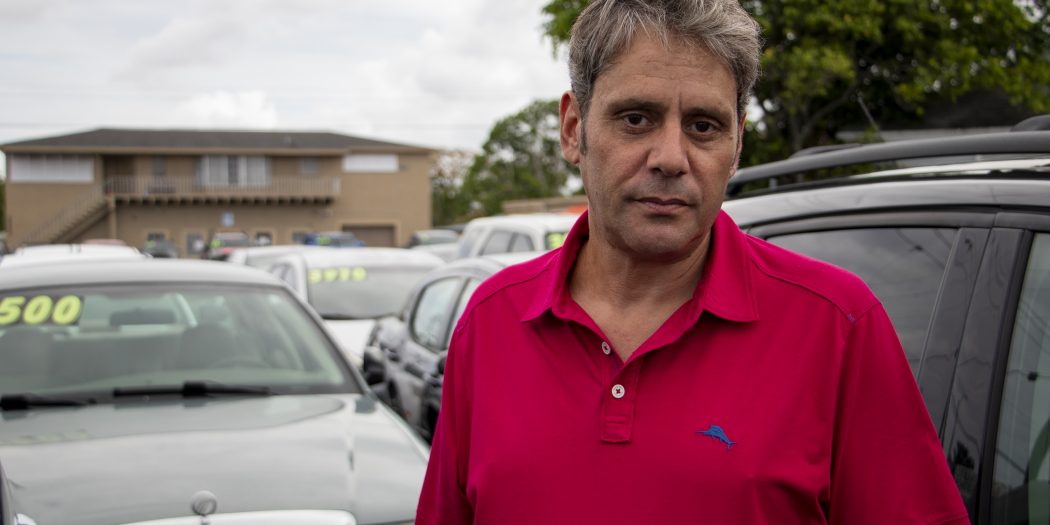 William Abramson stands in the lot of Auto Solutions of South Florida, LLC on Saturday, May 23, 2020. Abramson filed a writ of quo warranto on May 5. (Lauren Witte/Fresh Take Florida)

The decision affirms that DeSantis has broad emergency powers under state law to protect public health and safety. The ruling said the pandemic was a “natural emergency” under Florida’s emergency management law, and DeSantis was within his rights when he closed restaurants and bars earlier this year, among other actions.

The legal challenge was filed by William Abramson of Lantana, just south of West Palm Beach, who had acknowledged he was unlikely to win the case. Abramson now works as a construction contractor. He was a used-car salesman and former busboy who also had worked for decades as a lawyer until he was banned from the courtroom last year in disputes over his behavior.

Abramson said Thursday he was disappointed with the outcome because he said the court didn’t fully explain its decision. He said he did not believe the court addressed what he described as specific, legitimate and well supported points he made.

“This is a really bad day for the people of Florida,” Abramson said.

The court’s ruling matched the outcome of similar challenges against governors in California, Illinois, Kentucky and Michigan.

Abramson had said the governor’s decisions were a “selfish and ridiculous” attack on liberty.

The governor’s lawyers, in a 43-page response, urged the Supreme Court to dismiss the case or rule quickly for DeSantis, saying the state constitution and state law grants him broad authority to act for the benefit of Florida.

DeSantis had received generally high marks for his handling of the pandemic in Florida, except he drew national criticism for failing to close Florida’s beaches during its busy spring break. Then a new surge of cases over the past three weeks put Florida back in national headlines as a coronavirus hot spot – just as the state begins plans to host the Republican National Convention in Jacksonville in August.

Florida on Thursday reported more than 5,000 new cases for the second consecutive day, with a total of 3,327 deaths since the outbreak began. DeSantis has declined to issue a statewide requirement to wear masks inside businesses, although some cities and counties have ordered masks on their own.

The lawsuit went straight to Florida’s conservative Supreme Court because it was filed as a writ of quo warranto, a direct challenge to the governor about whether he has acted outside the scope of his authority.

This story was produced by Fresh Take Florida, a news service of the University of Florida College of Journalism and Communications. The reporter can be reached at ljohnson@freshtakeflorida.com.

Lauren is a reporter who can be contacted by calling 352-392-6397 or emailing news@wuft.org.
Previous Revisiting With Past Guests As COVID-19 Cases Spike In Florida
Next The Point, June 26, 2020: What The Saharan Air And Dust Layer Means For Florida This Weekend