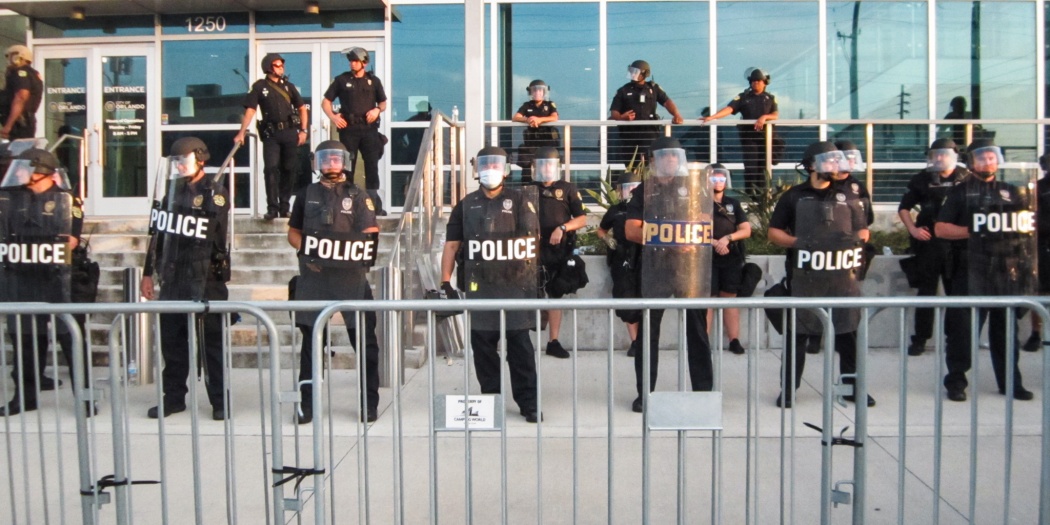 Orlando Police Department officers on May 31 guard their department’s headquarters, as protesters chant beyond the barricades. (Walter Harwood/WUFT News)

Even in the pouring rain, the names of Black Americans killed by police and vigilantes echoed this past month through the downtown Orlando business district: “George Floyd! Breonna Taylor! Ahmaud Arbery!” The source of the sound is hundreds — some days thousands — of protesters.

The protest marches, which took place daily from late May to early June, were some of the largest mass demonstrations in Central Florida in decades. Orlando has seen its fair share of protests in the past, including protests against systemic racism and police brutality, but transforming that protest energy into momentum for comprehensive policing reform has proved difficult.

This time around, a diverse array of activists and protesters believe they can force city and county officials to reform the Orlando Police Department and other pockets of the criminal justice system, if not through their actions in the streets, then through their choices at the ballot box. Dr. Patricia Hilliard-Nunn, an associate professor of African American studies at the University of Florida, said people nationwide reached a breaking point and won’t settle for less than real change.

“The response was, ‘We are finished. No more town halls, no more conversations about race, no more think tanks,’” Hilliard-Nunn said. “By the time these latest tapes of the killing of black people were released, there were so many people from all different backgrounds that were finished… D-O-N-E, done.”

The Orlando protest movement erupted in earnest on May 29. Social media rumors circulated the day prior alleging the now-former Minneapolis police officer charged with killing Floyd owned a home in the Windermere suburb of Orlando, a fact eventually confirmed by police. Since then, multiple protests have taken place in front of the home.

On May 31, demonstrators marched to the Orlando Police Department’s headquarters, with officers clad in riot gear and military-style fatigues guarding the building from behind metal barriers. Orlando resident Pierson James was among the crowd of demonstrators pressed against the barricades, chanting at police.

“I’m fighting injustices and a corrupt system that’s been in place for centuries,” James said loudly, struggling to hear his own voice over the chanting. “We always protest – it happens every year. Something happens, but nothing changes. This time it’s a revolution, and something is going to change.”

Winter Park resident Erica Davis chanted at police, too, but stayed farther back in an effort to socially distance due to the ongoing COVID-19 pandemic, which led most protesters to wear masks.

“We can’t sit and do nothing and expect things to change,” Davis said. “I’m not old enough to vote yet, so this is how I can do my part. The first election after my 18th birthday, you can believe I will do my part in that, too.”

Protesters in Orlando had a variety of demands for city officials, some more radical than others. Many called on the city to redirect funding from the police force to mental health treatment, while others called for defunding the Orlando Police Department entirely. There were also widespread demands for the citizen review board, established in 1992 to provide police oversight, to have greater authority to hold officers accountable.

On June 2, the Orange County Democratic Black Caucus helped organize a downtown Orlando event that was combination protest and political rally, with speakers urging thousands of protesters to channel the energy and momentum emanating from the street demonstrations into participation at the polls in the upcoming elections.

Paul Ortiz, an American history professor at UF and a faculty advisor for the UF Chapter of the civil rights organization Dream Defenders, saw in the June 2 rally a combination of both new and old protest techniques: social media organization coupled with megaphone speeches and voter education.

“There’s an openness among millennial activists and organizers to talk to older folks who have earlier movement experiences,” Ortiz said. “When Black Lives Matter first formed, they very intentionally called upon elders from the civil rights and women’s movements of the 1960s… They said, ‘What can you tell us?”

One notable aspect of the anti-racism, anti-police brutality protests in Orlando and across America is that they’re often comprised of mostly young people, many of whom are white and first-time protesters.

In Orlando, this diverse array of young organizers, activists and first-time demonstrators helped propel the George Floyd protests forward, day after day. Robert Cassanello, professor of history at the University of Central Florida, points to the fact that Orlando is home to the second-largest university in the country as one reason protests erupted so quickly there.

“I think to some extent, the students were an engine for the organizing, for getting the information out and for the traveling, and not to mention also making UCF a host to protests,” Cassanello said. “You’re aware of these protests in downtown Orlando, but I used to sit in my office and look out my window, and there’d be a Black Lives Matter march going through campus up to the administration building.”

The significance of the May-June Orlando protests is not lost on Cassanello. The mass demonstrations aren’t unheard of in Florida by any means, but he believes one has to look back decades to find protests of a similar magnitude.

“This goes back before Trayvon Martin, this goes all the way back maybe even to Rodney King in 1992, if not before,” Cassanello said. “In Miami you had, you know, rebellions and things. I think it’s ’78 and ’82 down there that would have been comparable to what you’re seeing now.”

One less obvious reason for the 2020 anti-police brutality protests becoming so massive could be the presidential election, according to Hilliard-Nunn.

“A lot of young people have been very active in campaigning recently,” Hilliard-Nunn said, pointing to the now disbanded Bernie Sanders presidential campaign. Scores of young Americans did volunteer work for the campaign and helped organize events.

The protests in Orlando have been largely peaceful. However, isolated incidents of bottle and rock throwing led officers to respond with pepper spray and tear gas. These clashes were more common early on in the protests; Orlando police reported no arrests during demonstrations held the weekend of June 6 and 7, when they estimated crowds of over 10,000 people.

As to what the future may hold for Orlando, Florida and the country when it comes to police reform, Cassanello is unsure.

“American society is really committed to the status quo as much as possible, committed to consensus,” Cassanello said. “And so it’s going to be difficult to get dramatic change in the U.S. at any one point in time.”

But he does feel optimistic that this time, the political conditions seem to have coalesced around the idea that something must be done about racial inequities in policing. While he does not believe the most radical protester demands will be met, he sees an opening to implement substantive changes.

“I’m surprised by seeing even Republicans who are getting to be bullish on police reform in ways they never would have been a year ago, two years ago or five years ago, so I’m kind of optimistic that something’s going to change” Cassanello said. “My pessimism would say the change isn’t going to be enough or isn’t going to be satisfactory — but it is going to be something that brings us a little closer to justice.”

Houston is a reporter for WUFT News who can be reached by calling 352-392-6397 or emailing news@wuft.org.
Previous The Point, June 22, 2020: The Debate Over A Longer Hurricane Season
Next Florida Votes 2020: What To Expect In The Suwannee County Primary Election