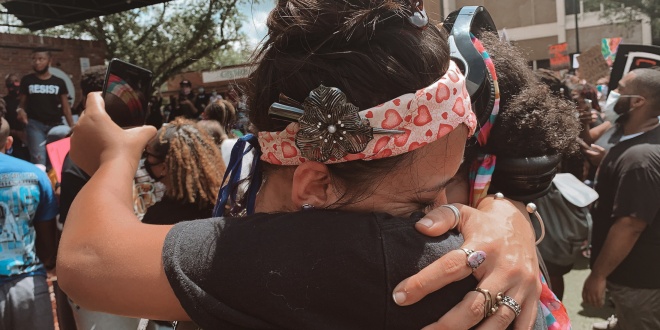 As speaker Reuben Faloughi highlights the crowd's emotions, Gainesville mother Hayley Reese and her daughters cling on to each other in solidarity. Reese said she wasn't sure if she'd attend the rally at first, but knew she had to do it for her daughters. (Megan Wordell/WUFT News)

May 31, 2020 Coronavirus, Government and politics, Law and public safety, National

More than 1,000 Gainesville community members gathered in Depot Park on Saturday and lifted up posters plastered with the phrase “I can’t breathe.”

The show of support was part of a nationwide protest effort that turned violent in places across America in the following hours, but not in Gainesville.

Those three words are now known as not only Eric Garner’s final three in New York City in 2014, but part of George Floyd’s last statements before his death in Minneapolis on May 25.

Gainesville was one of at least 30 U.S. cities that held a “March for Our Freedom” with organizers saying they assembled the event to honor victims of police brutality and enforce the national Black Lives Matter movement.

Unrest arose throughout the nation after the deaths of George Floyd, Breonna Taylor and Ahmaud Arbery, among others, at the hands of police or former police. Since Trayvon Martin’s killing by a self-appointed neighborhood watchman in 2013, the Black Lives Matter movement has sought to tackle systemic race-related incidents of violence like these, according to its website.

One in every 1,000 black men can expect to be killed by police, according to a study from the National Academy of Sciences. Additionally, USA Today pinned police brutality as a leading cause of death for black men ages 25-29, placing it just after cancer, heart disease and homicide.

While movements like Black Lives Matter have sparked significant national awareness of these issues, data from Statista showed case numbers simultaneously rising each year since 2017.

At around 10:30 a.m, people met at Depot Park to go over safety guidelines, schedule procedures and common rally chants, with the event’s timing in the midst of the coronavirus leading a majority of attendees to wear face-masks. An hour later, University Avenue was engulfed with passionate cries of, “black lives matter” and “I believe that we will win,” as people marched toward Bo Diddley Plaza.

It mostly did, but for one man whom police said drove at protesters with his car after the official rally had ended. There were no serious injuries, and police have charged William J. Connelly, 64, with six counts of aggravated assault.

“I trust each and every one of you to behave accordingly and hold each other accountable,” Lane said in an opening speech to participants. “Let’s look out for each other.”

While Gainesville resident and single mother Stonisha Varnett’s mask covered most of her face, it, too, carried the familiar message: “I can’t breathe” was written across the cloth covering her nose and mouth.

Varnett said she attended the march because she was sick of injustice. Being a single mother, she said, impacts the way she feels every time she sees another case.

“It’s scary for me because I have a little black girl. It could easily be her with a hashtag because she’s simply black,” Varnett said. “I’m just here because something has to change.”

Gainesville resident Carla Frais said Saturday’s was the first rally she had ever participated in, though she also attended a vigil for another recent Minnesota police shooting victim — that of Philando Castile in 2016.

“I’m afraid to call the police because they might end up thinking I’m the perpetrator instead of helping me in the way I need,” Frais said. “There’s just so many issues going on that have been here a long time, and they need to be addressed.”

As the crowd of over 1,000 people of all ages filled Bo Diddley Plaza, Latora DeSue, with Floyd’s and Garner’s final words written on her shirt, grasped the megaphone.

“At times we feel low,” she sang in a mix of passion, rage and hope, “but still we rise.”

Megan is a reporter for WUFT News who can be reached by calling 352-392-6397 or emailing news@wuft.org.
Previous Face Mask Use Won’t Be Enforced With Arrest Or Search, Gainesville And Alachua County Leaders Say
Next Pre-existing Health Disparities Could Affect COVID-19’s Impact In Rural Communities