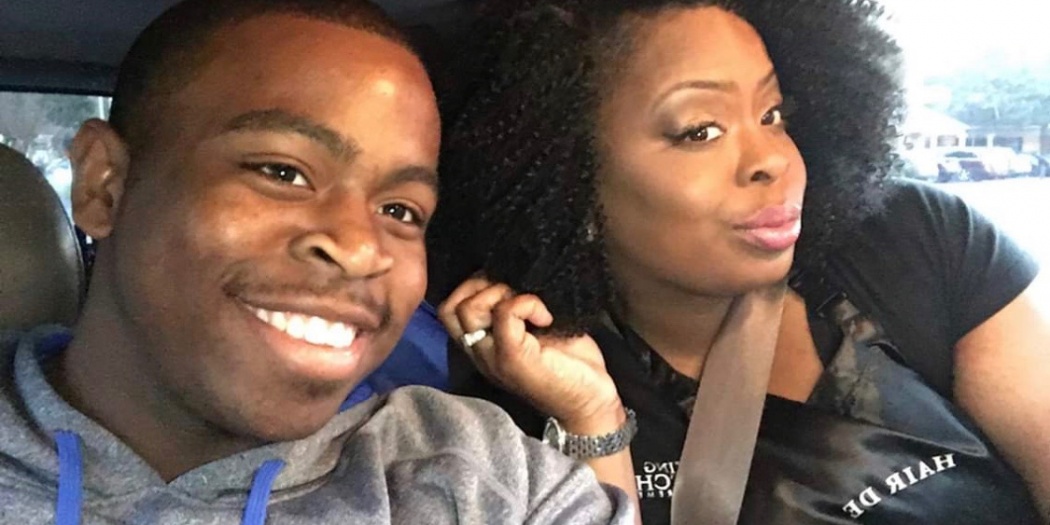 Edward Green and his mother, Kristle Mounds were disappointed that commencement ceremonies were delayed. (Photo courtesy of Edward Green)

Edward Green dropped $300 on a trifecta of suits in January. All three – ranging in style from a grey plaid to a royal blue and navy-blue pinstripe – were a three-course fashion statement set to be paired with a customized white and blue stole.

Green, a 23-year-old public relations major, will be the first person in his family to graduate with a bachelor’s degree. He acknowledges the odds set against him as a black man without a father figure.

“Basically, I’m supposed to be incarcerated or dead,” Green said.

To him, commencement is a three-suit occasion.

Amid a global pandemic, universities across the nation have postponed the commencement ceremonies of graduating seniors, or the “Class of COVID-19.” UF’s spring commencement for graduating students has been rescheduled for the weekend of July 31 to Aug. 2. Now, these dates may be indefinite after the university announced that all summer terms will be moving online.

Although UF’s first-generation services lets students self-identify as first-generation, these students typically come from families in which neither parent has earned a bachelor’s degree, Aguiar said. About 20 percent of UF students fall into this category.

Aguiar, a former first-generation student at UF herself, notices general feelings of imposter syndrome, a lack of guidance and sacrifice among these students. But she also sees strength and resilience as a result.

Some students are familiar with the concept of the glass ceiling, Aguiar said. For first-generation students, that ceiling is slabbed with concrete.

They haven’t seen what’s on the elusive “other side.” There’s only a tiny window of light to guide them while they pummel it.

These students are currently battling the clouds of uncertainty looming above their tiny windows of light.

She looked forward to the event for the past two years, but she and the rest of Green’s family understood that safety precautions were a priority in making the decision to postpone.

Mounds, a cosmetologist since she was 16, raised Green and his three younger brothers as a single mom.

“My mom just wanted to do what she loved,” Green said. “Which was hair.”

With an outgoing spirit and an entrepreneur’s mind, Mounds grew up with the mentality that she would open her own salon that would sell her own products. She didn’t feel the need to go to college to achieve this.

Mounds encouraged Green to apply to UF even though he was intimidated by UF’s admission statistics. He also didn’t see enough black representation in higher education settings.

“What inspired me was me wanting to prove the world wrong…” Green said. “That black people do go to college.”

Green’s family is African-American, but they aren’t exactly sure which part of Africa their ancestors came from, he said. The family’s records were burned when his descendants were shipped across seas to work as slaves.

He made it his mission to not only go to college, but to go to a good college and graduate.

In high school, Green’s family tossed frequently between Florida and South Carolina, and by his senior year, he had attended five different high schools. Still, he achieved straight As to show his younger brothers that it was possible.

Green remembers the taxing college application and financial aid processes. He applied to UF past the deadline because it had been moved from December to November that year.

Green turned his phone over when he received the email from UF regarding his admittance status. His heart dropped, and when he flipped his phone back over to read the message, his mouth dropped, too.

He and Mounds celebrated together, knowing Green’s hard work had been worth it.

Soon, Green was a freshman living in Beaty Towers. His GPA sunk to a 1.8 within his first semester as a finance major.

It was like a come-to-Jesus moment, Green said, but he didn’t want to reach out to his family for support. He felt like he was putting them to shame while wasting money and time.

Green worked harder, changed his major to public relations and got involved on campus. By his senior year, his stockpile of involvement included Innovation Academy ambassadorship, Black Student Union’s Innovation Leadership Program, Student Government, and affiliation with a fraternity.

Green also worked paid jobs in the UF Office for Student Financial Affairs and as an assistant marketing leasing agent at an off-campus apartment.

Through what he endured in college, he always looked forward to commencement. When the time came, he sent out 175 invitations to friends and family to celebrate.

Now, his grandmother’s plans to decorate his house for the celebration must wait along with commencement.

Green’s grandmother is still excited for the new date, but Green doesn’t see the point in it anymore. The momentum was lost.

But he will likely still attend the ceremony – in an assortment of suits – to honor his friends and family.

Victoria Gingras may not have three suits awaiting her, but her square graduation cap is bare.

Gingras would’ve decorated it with the quote “Onto my new dream” from the movie Tangled or “I did it for my cats.” Her grandparents would have flown in from Connecticut to watch her turn her tassel.

She said it would feel weird to attend the ceremony at that point. She’s currently working on a teaching certificate that would allow her to become a high school teacher by then.

Gingras, a Connecticut native, moved to Ocala at 9. Her peers flaunted trendy clothes and access to laptops and certain school supplies that she didn’t. She knew she wanted to grow up to live more comfortably than her parents did.

The only way to do this, she thought, was to go to college.

When it was time to decide what she wanted to pursue after graduation, Gringas’ love for English and her desire to teach guided her. There’s no purpose in life unless you’re helping others, she says.

In fourth grade, her imaginative essay about a Jumanji-style game earned her a perfect score on the FCAT writing assessment, which her mom still keeps. In high school, Gingras’ algebra teacher, Ms. Coast, loosened her hateful grip on math.

Inspired by Ms. Coast and her passion for English, Gingras began to think she could teach for the rest of her life.

Neither of Gingras’ parents had a bachelor’s degree, but her mom began taking online courses through Saint Leo University in 2013 to advance her position as an insurance adjuster. Gingras began her freshman year at the University of Central Florida while her mom finished her classes online.

Although her mom had recently pursued a degree, the drastic transition to college was terrifying to Gingras. Like many first-generation students, she had questions about college life that no one in her close circle could answer.

She felt anxiety from the pressure to succeed, and she struggled to build a new support system at UCF.

“I have to finish this because no one else even tried to,” Gringas said.

Gingras stayed for a year at UCF before transferring to UF — her dream school. She feared rejection from UF in high school, and she never applied. But a couple of years later, she became a UF student.

When she first arrived in Gainesville, the city’s transit system seemed daunting to Gingras. But she learned how to navigate UF’s flurry of routes. She now misses riding the bus to her adolescent literature and creative nonfiction classes – two of her favorites.

“We do all of this just to have a little recognition,” she said.

But her experiences as a first-generation student are being honored in other ways. After guiding her younger sister through college applications, Gingras’ 20-year-old sister is now enrolled at UCF program to later join the medical field.

Her brother, 17, has needed a little nudging to start taking school seriously. He didn’t understand the urgency of it, Gingras said. She didn’t either when she was in high school.

She applied to three schools at the last minute and didn’t explore any other options because she was afraid to. She didn’t have the kind of guidance about college that she’s now offering to her younger brother. He’s starting to take school seriously.

“I’d like to think I helped a little,” Gingras said.

The future of commencement remains unclear, but first-generation students like Gingras and Green will find other ways to celebrate something left unscathed by COVID-19: a crumbling cement ceiling.

Tori Chin is a public relations major at University of Florida's College of Journalism and Commuications
Previous Standing On Dignity
Next Drive Through Weddings, Medical Innovations, And Vaccine Development During COVID-19