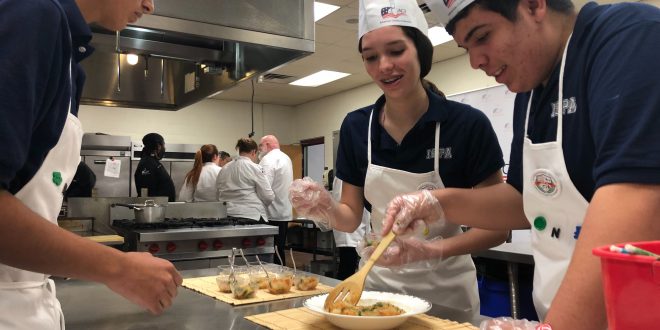 Hector Pomar, Ana Paula and Dairon Hernandez place their finishing touches on their “Big Boy Spinach” as they prepare to serve the judges their dish. (Noah Davalos/WUFT News)

George Smith has been cooking since he was 5 years old. So when his teacher at Eastside High School in Gainesville introduced a competition to create a dish for NASA, he was all for it.

Taste. Appearance. Aroma. Texture. Those were the key judgment factors at a regional contest of the NASA HUNCH Culinary Challenge for high school students held recently at Eastside.

Smith and three other students from the Institute of Culinary Arts at Eastside competed against teams from the International Studies Preparatory Academy (ISPA) in Coral Gables and Nature Coast Technical High School in Brooksville, near Tampa.

The prize is one of 10 spots in a national competition at NASA’s Johnson Space Center Food Lab in Houston in April. NASA will process the food from the winning team – and then send it up to the International Space Station, orbiting 248 miles above Earth, for astronauts to enjoy.

“Greetings from the International Space Station,” a group of seven astronauts wrote in a thank you note to the Phoebus team. They eat the hash on Christmas day as part of a big brunch.

“We loved it,” they wrote. “We were all speculating as to which herbs gave it the unique flavor and then found the ingredient list. … Thank you and best wishes from orbit.”

“After the research phase, we realized that wouldn’t work, so we’re doing quesadillas in space,” said Pam Bedford, the school’s culinary arts teacher and the team’s mentor. “It doesn’t have the nice ring that “tacos in space” did, but it’s what we’re working with.”

For the record, Mayer said, the team discovered that tacos would break apart in space, while  quesadillas are glued together with cheese.

The team’s quesadillas consist of Mexican-based pork carnitas with refried beans, salsa verde and guacamole. Mayer said the sauce was not traditional: He condensed the sauce by heating it on the stovetop to make it thicker. That should keep the quesadilla from floating away in space.

The students from ISPA were the only participants who are not a part of a culinary program.

“We’re the only crazy ones here,” said Marisol Restrepo, a biology teacher at the school.

The judges didn’t reveal their final scores at the regional competition, but they expressed their confidence in all of the students’ dishes.

“There’s no winner today, but I don’t know how the rest of the contestants will be able to beat you guys,” said one of them, Darin Nine, director of culinary instruction at the Department of Culinary Arts and Hospitality at Marion Technical College in Ocala.

“We hope that one of the Florida teams will have the best dish in the galaxy,” Bressinger said.

The judges’ scoresheets have been sent to NASA, where officials there were expected by this week to pick the 10 best dishes from high schools across the country. Bedford said she and the Eastside students have been trying to stay positive while waiting patiently for the results.

Make no mistake, though, that’s not easy, the teacher said.

“Thinking you’re waiting for bad news will drive you crazy, so they’re choosing to wait for the good news,” she said.

Noah is a reporter for WUFT News who can be reached by calling 352-392-6397 or emailing news@wuft.org.
Previous The Point, March 4, 2020: A Third Coronavirus Case Is Confirmed In Florida
Next Ex-Inmates In Gainesville Make It Their Job To Ease The Stigma For Others Like Them