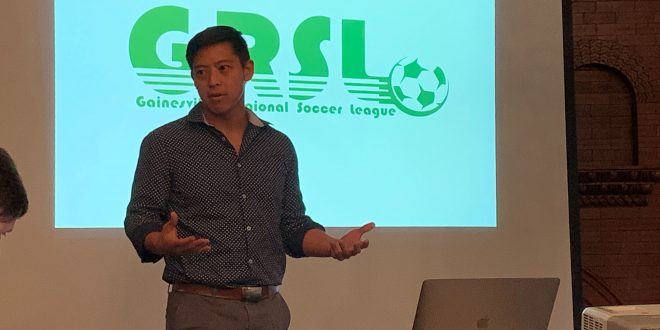 The conditions are a problem for the Gainesville Regional Soccer League, whose representatives on Wednesday night advocated for park renovations in front of the Gainesville Public Recreation and Parks Board.

Among the laundry list of issues the league has with Forest Park: poor bathroom facilities, limited access to water and a lack of bleachers for each field. But player safety is the main concern for the league.

“Currently, (if there’s lightning,) the board makes the call if the game is going to stop based on if it looks close enough,” she said. “The reason that’s hard is because there’s pressure to keep playing… and people don’t want to stop.”

Roland said the park’s conditions play a factor into player safety, as well. The soccer league wants to have Field C of Forest Park re-graded and re-sodded to prevent player injuries. She said the desert-like fields at the park expose players to higher risks of tripping, falling and not being able to run effectively. The grass is poor quality and the fields sometimes flood due to a lack of drainage at the park.

An issue that remains a safety concern and a nuisance to players and drivers alike are the lost soccer balls that fly into the street. Players frequently go cleat to asphalt, Roland said, to retrieve the lost balls that roll into traffic. A net would prevent the balls from going onto the street and eliminate potential accidents.

He said he wants the league to receive financial support from Wild Spaces and Public Places to renovate the park. Alachua County voters in 2016 passed the Wild Spaces half-cent sales tax to maintain “environmentally sensitive” lands and public parks, and a committee oversees how those funds are spent.

Parks Board Chairman William Burger, however, poured cold water on the league’s hopes when he told its representatives the soccer league is ineligible to receive any of the Wild Spaces funds because of a timing technicality. In 2016, when voters approved of the parks tax, Alachua County owned Forest Park.

The city took ownership of it a year later — in November 2017 — and the park is therefore not listed in the city’s 99 approved lands and parks for which the sales tax revenue can be used.

Burger did say he remains supportive of the soccer league and hopes it can be added to the approved city parks list for Wild Spaces spending.

“We would allocate the funds to bring the park into as close a playing condition as they have outlined,” he said. “They’re a very strong organization and we certainly support their efforts for recreation in Gainesville. We certainly want to be as supportive of whatever it takes.”

Burger said he’s unsure what kind of costs are involved in fulfilling the league’s needs, as there isn’t a defined budget for the proposed project. Roland said she isn’t able to provide accurate costs for the renovations, but she was able to ballpark it:

The league offers one of the few adult recreational soccer opportunities in Gainesville and has been in operation since 1982. It has three separate seasons each year. Roland and Wang said the downtrodden fields of Forest Park may make it difficult for the league to field a summer league in 2020 for its 605 active players.

Roland said local fields like Citizens Field and University of Florida fields such as Flavet and Norman are options for the summer, but it’s a competitive process to reserve spots.

She hopes the league can have a summer season because she loves the tight-knit community and its inclusiveness.

The league stresses its diverse co-ed rosters and age range. About 25% of its members are women, and the range of participants stretches from 18 to 68 years old. Roland’s team has players of 11 different nationalities.

“I think there’s a lot of great benefits,” she said. “It’s just really fun to play soccer… and have this multi-age, multi-gender team working together.”

To become eligible for Wild Spaces funding, at least four members of the oversight board would have to vote Forest Park onto the list of the existing 99 projects. Its next meeting is in March.

Dylan is a reporter for WUFT News who can be reached by calling 352-392-6397 or emailing news@wuft.org.
Previous Florida’s Amendment 4 ‘Fines and Fees’ Limitation Found Unconstitutional In US Appeals Court Opinion
Next New Gator Mural Graces Wall At Butler Plaza