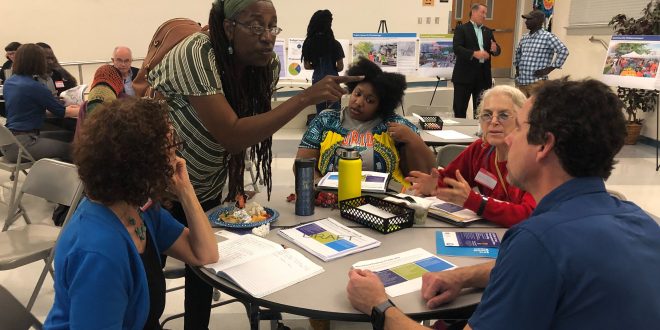 In a small auditorium at the A. Quinn Jones School, about 20 Gainesville residents on Wednesday night workshopped ideas for the Gainesville Community Reinvestment Area draft plan.

The new plan will set a course for the city department’s intended revitalizations in blighted areas. It was the sixth and final time the public had a chance to comment on the draft plan before it goes to the Gainesville City Commission for review in March.

Tensions rose on Wednesday when discussions turned to a certain project.

Nkwanda Jah, 66, the executive director at the Cultural Arts Coalition, had a heated discussion with a Community Reinvestment Area manager about a plan that would help fund the historic heritage trail.

At her first community engagement workshop, she left disappointed and with only one thought: “A heritage trail?!”

Jah said she doesn’t believe that something like a trail should receive as much as $950,000 in funding in the coming fiscal years.

“That’s not what we need,” Jah said. “We need houses that people can afford, we need economic entrepreneurship supporting local business.”

Blumberg explained how funding in the past depended on each section’s taxable property, but now the pool of money can be allocated to any area, perhaps allowing the Eastside and other blighted areas to catch up. He said that it is still the “same size on the outside but no interior lines at all. So our funding could be spent anywhere that we thought was necessary.”

Kali Blount, 63, works as a registered nurse at UF Health Shands Hospital and also serves as one of the 15 members of the Gainesville Community Reinvestment Area advisory board. He also had an issue with the heritage trail in the plan, but for a different reason.

“If you look at the development of heritage trail,” Blount said, “combined with the gentrification going on in the neighborhood, it looks like we want to have this necklace of history, this trail around a neighborhood that used to be black. You know it’s like history is so much more palatable if there’s not too many scary black people hanging around.”

He doesn’t think that the plan should focus on bringing in larger businesses from outside of Gainesville and further gentrifying it. He hopes to see the city department change from being a main player in gentrification to a more helping hand to Gainesville city residents.

“If you’re going to displace people,” he said, “you have to make sure there’s some place for them to go.”

Blount hopes that meetings like these will allow people an opportunity “to really air true grievances and that the people from the policy halls wouldn’t miss it.”

The Gainesville City Commission is expected to receive a presentation on the plan on March 5.