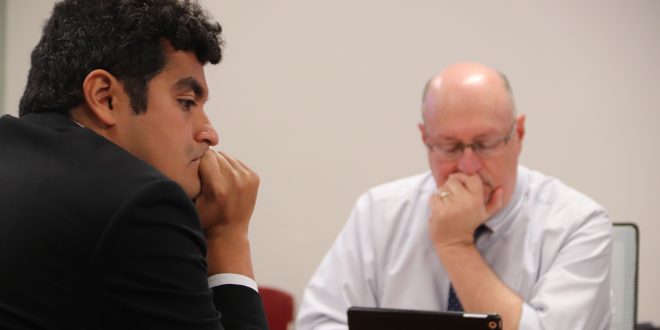 The Gainesville City Commission’s Race and Equity Subcommittee had a meeting Tuesday where its members decided that an extension of its sunset date is necessary to bridge equity gaps within the city, especially those involving minority-owned and women-owned businesses.

“The work of race and equity is not going to be done in six months,” City Commissioner Harvey Ward said.

City Commissioner Gail Johnson said there is one more decision-making meeting left for the subcommittee. She said she assumes an extension will be granted.

City Commissioner David Arreola said for it to become a standing committee, it must receive approval from the full commission. Ward said the status of the subcommittee’s shelf life will be discussed Thursday at the City Commission meeting.

When the committee met in November, Johnson said she would like to see equal representation of all genders and ethnicities in city employment ranks within five years, a process that may call for a disparity study.

Three months later, the study has not been conducted.

Teneeshia Marshall, the city’s equal opportunity director, said she is reluctant to begin creating programs before the study is done.

However, there are some steps that can be taken now.

Marshall said she would like to get rid of fees for Demandstar, an online Florida government contracting marketplace. Demandstar connects government procurement agencies with business vendors both locally and nationally. Marshall said it would cost the city about $5,000 a year to cover this cost.

Marshall also said it is important to focus on incorporating equity-oriented language in the city’s workforce, even before the hiring process is completed.

“So the person has already looked at the job ad, they know that equity is something that we’re committed to here in the city,” Marshall said.

This will have potential employees already thinking of what the city stands for from the beginning of the process, Marshall said.

Ward said it is important to create and collaborate with peer cities that will allow the subcommittee to monitor and compare its progress.

City spokeswoman Shelby Taylor said the subcommittee does not have one specific call to action, but multiple.

“Those calls to action are going to shift over time,” Taylor said. “There’s not an end date as we discussed here. It’s ongoing work.”

“I don’t think we’re talking about waiting an abnormal amount of time or disappointing people,” Arreola said. “On the contrary, we’re moving pretty speedily, at least in my experience around here.”

Taylor presented the subcommittee with four communication steps she said are critical to achieving equity in Gainesville.

The subcommittee listed community support and its internal focus as strengths of the quest for equity in Gainesville. A lack of local data has proven to be a setback for the subcommittee, including the incomplete disparity study.

Taylor said community skepticism and broad goals are threats to the success of equity in the city.

“Sometimes the elephant is too big,” Taylor said.

Johnson said she would like to make a decision on April 1 about how the subcommittee will proceed.