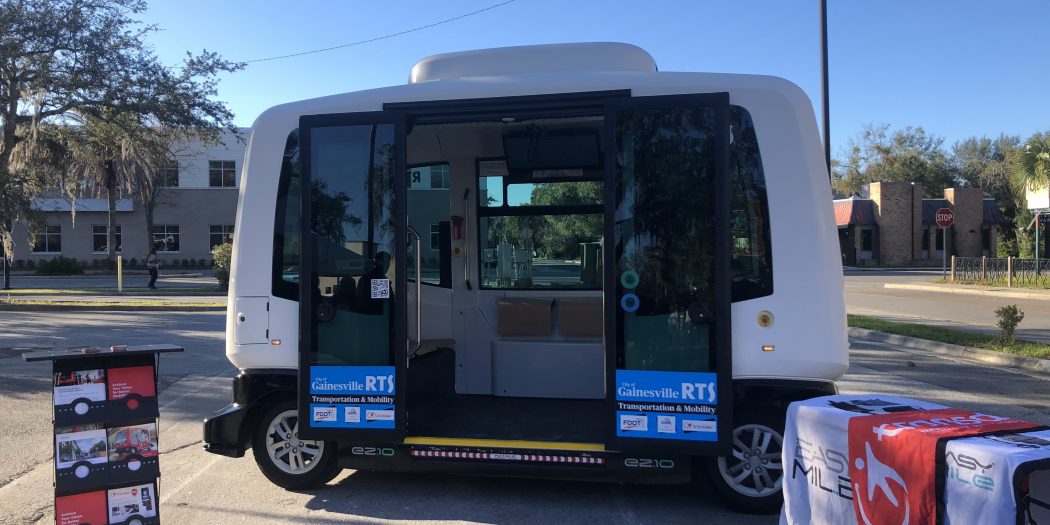 City officials displayed for the first time on Tuesday one of the three automotive vehicles that will drive in Gainesville. (Lauren Rousseau/WUFT News)

What’s It Like To Ride In A Driverless Bus? Gainesville Passengers Are About To Find Out

Instead of taking his usual route to campus on the RTS bus, 29-year-old Patanjali Sristi Lakshmiprasanna Sriramakumara became the first pedestrian to ride one of Gainesville’s new autonomous buses on Monday morning.

He was waiting at his usual bus stop next to Second Avenue Centre Apartments when the autonomous bus stopped.

“Does this go to UF?” Sriramakumara asked. It wasn’t until he stepped inside that he realized no driver was present.

“This is pretty cool,” Sriramakumara said. “I would ride it again if it arrives before the RTS bus.”

Less than two hours earlier, representatives from the City of Gainesville, Florida Department of Transportation and the University of Florida Transportation Institute celebrated the public launch of driverless buses. The ceremony was held at the parking garage on Southwest 2nd Street.

Gainesville residents can now use the bus for free as it travels between the parking garage on Southwest 2nd Street and the Innovation Hub from 8 a.m. to noon and 3 p.m. to 7 p.m. The bus is still in its testing phase, however, so an operator will be present at all times on the bus — until the testing phase is complete on June 17.

“Yes, it’s a test,” City Commissioner Harvey Ward said at the event. “But it’s a benefit to the people of Gainesville.”

The bus fits 12 passengers: six standing and six sitting. A monitor in the middle of the bus displays its next stop and a control panel displays the bus’ speed.

The bus has the power to drive at 25 miles per hour but will not go faster than 15 miles an hour during initial part of the testing phase, said Eli Ghosn, a fleet operator and dispatch specialist for TransDev North America, the vendor of the project.

The operator will be monitoring the vehicle and will not drive unless there is an emergency. Instead of a typical steering wheel, the bus has a controller to drive, similar in appearance to a video game controller.

An emergency stop button is installed inside the bus, and several cameras monitor the interior of the vehicle. In the case of an emergency, an offsite operator can see the camera footage and speak to passengers through the bus’s speakers, according to Kristin Buchholz, a project manager at EasyMile, the company that designed the vehicle.

Gainesville Fire Rescue District Chief Shawn Hillhouse was at the event and said he is very excited that Gainesville is on the wave of the future with the new driverless buses. He said the city has made sure the fire department is comfortable with the autonomous vehicles and that the department has been trained to deal with any potential emergencies or problems.

While driving through downtown Gainesville, the bus stopped at roundabouts, and slowed down as bicyclists rode by, showing a response to the traffic around it.

The bus’ GPS is connected to 10 to 17 satellites and measures the distance between the vehicle and surrounding buildings, Ghosn said. In comparison, most phones are connected to about four, he said.

The bus scans the road and sees things as small as raindrops.

“So, it will definitely stop for your dog or cat if they decide to cross the road,” he said.