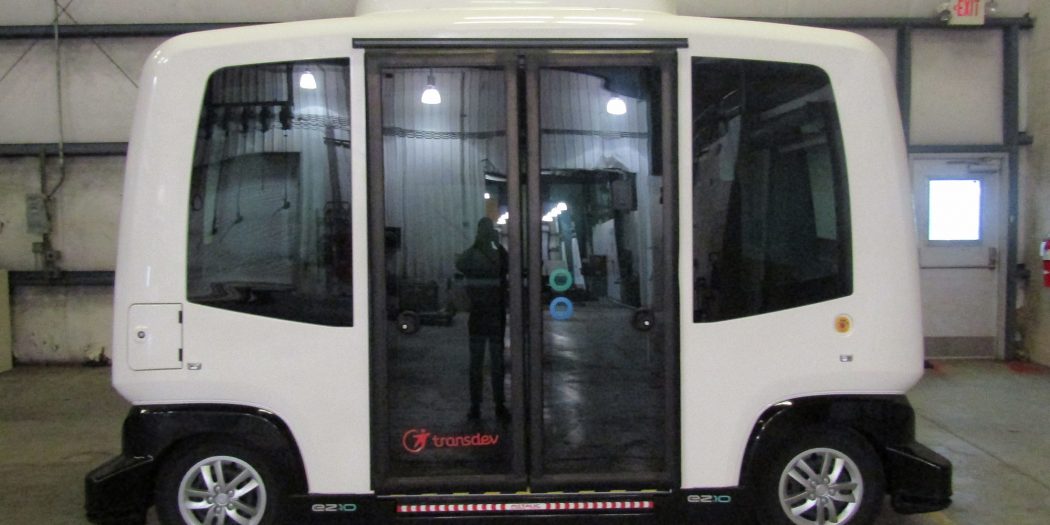 Three vehicles like this 14-foot-high, 10-foot-wide, 19-foot-long self-driving EasyMile shuttle will soon be carrying passengers on Gainesville's public roads. Traveling at no more than 15 miles per hour, each of these so-called autonomous vehicles will be able to transport up to 12 passengers between downtown and the University of Florida campus. (Photo courtesy of RTS.)

Gainesville Set To Run Self-Driving Vehicles On Its Public Roads

Updated: Jan. 31, 4:45 p.m. While most of Gainesville’s residents are sound asleep, an electric shuttle with no one at the wheel roams the downtown area in the early morning hours, inching around roundabouts and creeping along city streets.

That self-driving vehicle and two others, now undergoing test runs, are expected to become available as a new form of public transportation in Gainesville by the end of the year, according to Thomas Idoyaga, a spokesman for the city’s Office of Mobility.

The EasyMile shuttles, developed in Europe, are 13 feet long, 10 feet high and 6 1/2 feet wide. They have enough room for six passengers to stand and six to sit.

They “kind of look like a toaster,” Idoyaga said.

A few other communities around the country, including Jacksonville and Las Vegas, offer self-driving shuttles now, Idoyaga said. In Jacksonville, it runs in a designated lane. City Manager Lee Feldman wrote in an email to the mayor and city commissioners, “As far as we know, Gainesville is the first, and only, transit operator to receive this approval for road operation in the United States.”

But the city’s communications director, Shelby Taylor, has clarified in an e-mail that Gainesville is not claiming to be the first community in the country to test AVs on open roads. And BEEP, an autonomous mobility solutions company, has pointed out that it has been running self-driving shuttles on the streets of a planned community, Lake Nona, which is within the city limits of Orlando.

The present phase of testing in Gainesville started in early January, after the city obtained permission from the National Highway Traffic Safety Administration to operate two autonomous vehicles for six months, Idoyaga said.

The vehicles are supplied by Transdev North America, which describes itself on its website as being at the forefront of autonomous vehicle technology, with projects under way not only in Gainesville but in Colorado, California, France and the Netherlands.

The company says the AVs at the moment are suited for trips of less than 4 miles and can be available on-demand 24 hours a day.

Feldman said Gainesville has long been interested in self-driving vehicles. This project, he said, will put Gainesville on the map as “one of the leaders in the autonomous vehicle and smart technology for transit realm.”

The shuttles have to meet all state and federal government requirement for self-driving vehicles, Idoyaga said. They are being tested to see how they cope with difficulties, from rain or a plastic bag tumbling across its path, to waiting for a mother to get her child and stroller off the shuttle.

Two of the AVs will operate at the same time, while the third charges back at the station. Each vehicle has a battery life of about 10 hours, Idoyaga said. The shuttles will stop at six locations from downtown to the University of Florida’s campus.

This project has been in the works since 2017, according to Taylor. But an expired safety waiver and a government shutdown forced a pause.

“This was not a priority,” Idoyaga said. “When the government shuts down, testing gets put on the back burner.”

But the project is now back on track. It is entirely funded by a $2.5 million grant from the state Department of Transportation, according to Taylor.

The renewed safety waiver was put into place three weeks ago and will run through June 2020, Idoyaga said.

The first phase of the project includes testing the vehicles to see how well they negotiate route features like roundabouts. The shuttle can move up to 25 miles per hour, but will not exceed 15 miles per hour for safety reasons. The present testing route goes from the Second Avenue Downtown Parking Garage to the 12th Street roundabout and loops back downtown to the garage, Idoyaga said.

He said that even when the vehicles are cleared to go on the roads full-time, there will always be an operator in the vehicle, just in case any errors occur that need to be overridden.

Although the EasyMile vehicles are at the forefront of self-driving technology, there are risks.

“The biggest concern is with pedestrians,” Idoyaga said. “You have to make sure that this is safe, that it does stop if somebody is walking in front of it.”

In March 2018, a self-driving Uber killed a pedestrian in Arizona.

City Commissioner Adrian Hayes-Santos said the city has a plan, Vison Zero, to end all road fatalities and injuries.

“I think autonomous vehicles are another way that we can achieve this,” he said.

He believes there are many reasons Gainesville was selected as a site for this project.

“We have a good route from two major areas from downtown to campus,” Hayes-Santos said. “And also having the University of Florida here is a major plus for us.”

The University of Florida Transportation Institute is also in partnership for this project, according to Taylor.

Gainesville city residents will not have to wait long to see these vehicles in action. The Office of Mobility is holding an event Monday to introduce them to the public.

Editor’s note: This story has been updated to correct a previous version that incorrectly reported the EasyMile shuttles were 14-foot-high, 10-foot-wide, and 19-foot-long. The accurate dimensions are 13 feet long, 10 feet high and 6 1/2 feet wide. The size of the state grant is $2.5 million, not $3.5 million as originally reported. The shuttle was described as capable of traveling at up to 30 mph. The actual speed capacity is 25mph. The second phase of the route was incorrectly reported to end at Turlington Hall. Phase two will end at the main UF entrance. The original story falsely claimed Gainesville would be the first U.S. city to operate autonomous shuttles.

Mary is a reporter for WUFT News who can be reached by calling 352-392-6397 or emailing news@wuft.org.
Previous Charter Review Committee Votes To Dismiss Representation Proposal Despite Public Support
Next Jan. 30, 2020: Morning News in 90