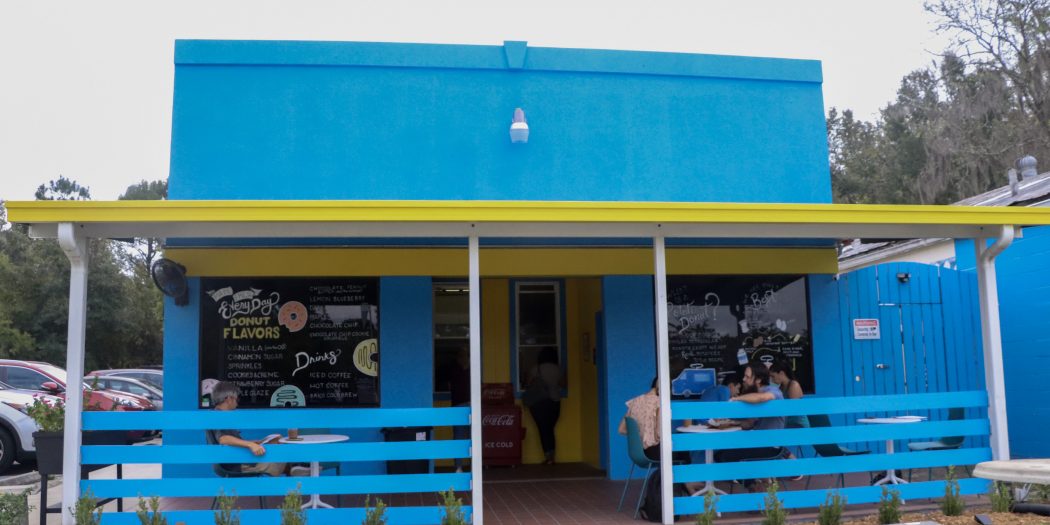 The new bright blue business seen along South Main Street is a donut shop where the employees add potatoes to the recipe. (Valentina Botero/WUFT News)

With the vision of creating a mom and pop style donut shop, Drew Stuerman, owner of Halo Potato Donuts, last month opened up his brick and mortar location at 1323 S. Main St.

Now, at his new location, customers are able to purchase a variety of donuts such as their original vanilla glaze or choose a combination of sweet and savory with their maple syrup bacon donut and enjoy them on the spot in the spacious patio furnished with seats and tables.

Why the South Main location?

Stuerman said he felt like all the stars aligned when the location on South Main Street became available because his customers were already accustomed to the surrounding area.

“We are very excited to be here because the development that has begun in Depot Park is all heading this way,” Steurman said, “And in the next two to three years South Main Street is going to be totally transformed.”

Earlier this fall, the completion of an $8.5 million reconstruction project changed both car and pedestrian access and brought a modern aesthetic.

After over a year of construction, the street features redesigned pavements, spacious bicycle lanes, and wider sidewalks on both sides.

Businesses have benefited from more pedestrian traffic, according to initial interviews with some of their owners. If true, it fulfills one of the many goals planners and politicians in city government envisioned with their Destination South Main project.

Just behind Halo Potato Donuts is GT Motorcars. Owner Michael Obie said the auto repair business has been in that location since 1994.

He’s witnessed the 25-year transformation of South Main Street from a four-lane passthrough area into a business hub. He’s excited about its potential.

“After the road construction, it opened up a little bit for people to really see what Gainesville has,” Obie said, “and I’ve experienced an influx of customers.”

Slower speed limits and only having a single lane gives people time to look at the businesses along the strip, he said.

GT Motorcars is welcoming of its new neighbors, Halo Potato Donuts, and sees that it has brought in attention from people around town.

“In the morning time, you see a lot of customers in the queue, and when they are there, they know we are fixing tires,” Obie said, “So when they look at this place, I think they will remember us.”

Across the street from both businesses is the Gainesville Fine Arts Association. Katie Lemle, gallery and operations manager said the street’s new look has been “awesome” for the gallery.

“We had the street torn up, which was kind of detrimental,” Lemle said, “but it was completely worth it because it’s beautiful and we have a new front patio area.”

Use the sliders below to explore the past decade’s transformation of the South Main Street area near the Cade Museum and Depot Park. (Images courtesy of Google Street View)

Valentina is a reporter for WUFT News who can be reached by calling 352-392-6397 or emailing news@wuft.org.
Previous The Point, Nov. 27, 2019: More Questions Emerge About Another Recent Election In Marion County
Next Morningside Nature Center’s Annual Cane Boil & FiddleFest Is A Step into the Past