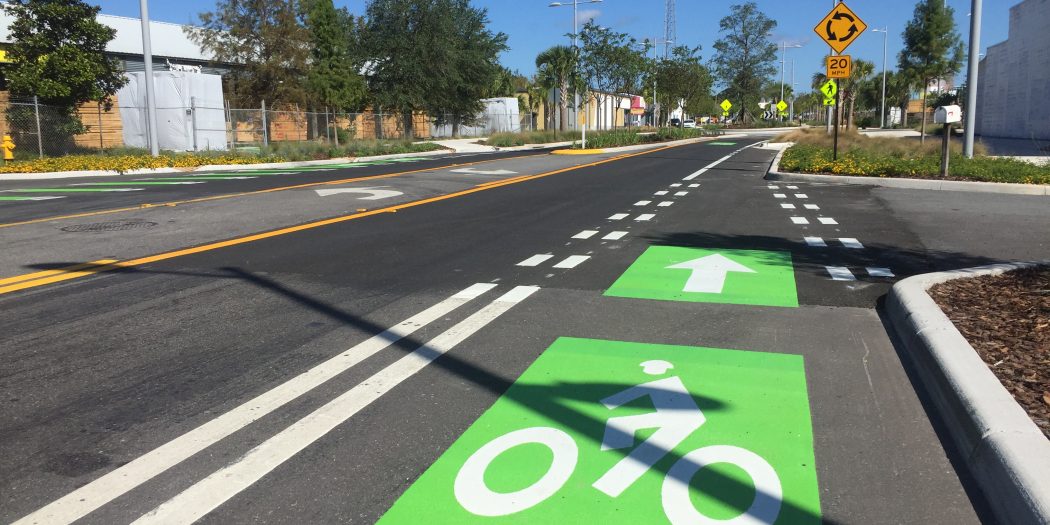 Tire tread marks tattooed the weathered asphalt, the bike lanes were too tight, and speeding vehicles veered through turn lanes and faded “merge” signals along the roadway.

Thanks to an $8.5 million reconstruction project, however, the three-quarter-mile corridor along South Main Street in Gainesville, from Depot Avenue to 16th Avenue, is dramatically different.

It now has repaved sidewalks and is studded with new medians and roundabouts. Freshly planted trees and other greenery garnish remarked bike lanes and crosswalks.

“It’s been a long time coming, but it was definitely worth the wait,” said Ashley Bryant, senior manager for community engagement at the Cade Museum for Creativity and Invention, which is at the north end of the reconstruction area.

The Gainesville Community Reinvestment Area, a new city department reconfigured from the Community Redevelopment Agency and that is responsible for the project, responded to complaints from drivers and pedestrians about safety and parking. For two years, contractors hired by Oelrich Construction of Jonesville put overhead utility wires underground, created medians and roundabouts and eliminated or repurposed road lanes.

Many in the community say the roadway is safer for exercise and leisure. For example, new bicycle pumps and water fountains cater to bicyclists and joggers where Hawthorne State Trail intersects the corridor.

“South Main used to be just a giant drag strip,” said James Thompson, 48, an avid cyclist who owns a painting company. “But now I feel comfortable recommending people to bike there.”

While limited street parking hampered business investment in the area, several side-street spaces have been installed along the road. To also make the area more aesthetically pleasing, trees were rooted and green spaces were added.

“The work here has boosted our business,” Jones said. “It’s helped people know who we are.”

In addition, several business properties along the roadway underwent facelifts to be on par with the revamped look. The city department is offering up to $50,000 in a façade grant program that reimbursed up to 50 percent on expenses made to improve building design. The improvements ranged from repainting walls and upgrading weathered windows and doors.

“The CRA façade grant in that area is a big boon to those businesses,” said Ryland Wagner, Joyner Construction contractor, who performed renovation on Gator Fire, a company specializing in fire equipment on the 1000 block of South Main Street.

The community reinvestment agency manager, Andrew Meeker, said it will now manage the landscape and be responsible for cleaning trash and debris to maintain its pristine condition.

The project had its hiccups. It was originally to have been done in December, but its first delay came from complications with undergrounding the street’s electrical utilities. The project was further delayed through the summer after the work failed a final inspection by city staff.

Some in the community have argued against the utility of the new medians. One placed north of the South Main Street and 16th Avenue intersection has negated customers’ ability to turn directly on to some properties, said Robert Sturm, owner of GT Motorcars.

“The construction was supposed to attract business,” Sturm said, “but they’ve made it more difficult to get in and out of some.”

Kevin Jeffers, owner of Jeffcoat Signs, on Southwest 16th Avenue, said he believes the median in front of his property poses a risk for drivers who attempt a U-turn.

“A Prius can barely make that U-turn because the road is so tight,” Jeffers said. “They try to, but can’t do it, and then they got to back up in to 16th Avenue to come this way. It’s dangerous.”

While no known accident has yet been caused by the U-turn, eight car crashes have been reported within 100 feet of Main and Southwest 16th streets since January, according to traffic crash reports provided by Florida Department of Highway Safety and Motor Vehicles.

“I just hope someone has looked at the long term on this,” Sturm said.

City officials believe the medians are a fair trade-off to improve safety along the corridor.

“People use to fly down that road at any time of the day,” City Commissioner Adrian Hayes-Santos said. “The difference there now is amazing.”

Alcino is a reporter for WUFT News who can be reached by calling 352-392-6397 or emailing news@wuft.org.
Previous Oct. 21, 2019: Morning News In 90
Next Wind Damage Possible in Florida Panhandle Monday Evening