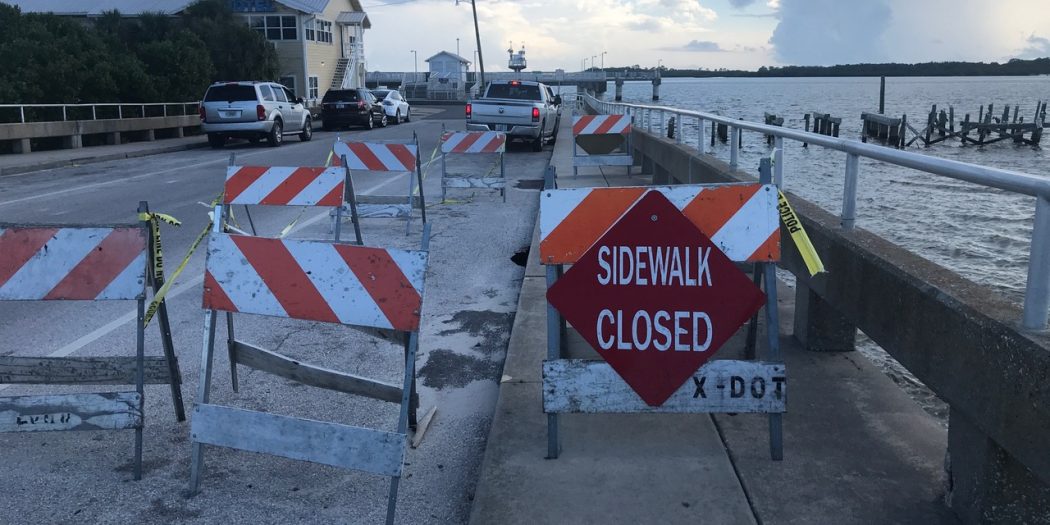 Construction barriers on the C Street Bridge in Cedar Key keep pedestrians and cars away from holes formed between the road and sidewalk. (Emily Mirabelli/WUFT News)

On a one-way bridge connecting the largest tourism district in Cedar Key, yellow caution tape hangs from six roadblocks forming a circle around holes separating the sidewalk from the road.

A red “Sidewalk Closed” sign warns motorists and people passing through to nearby motels, restaurants and other businesses of one large hazard in particular.

The Florida Department of Transportation plans to demolish the C Street Bridge, which connects with Dock Street at the Cedar Key Fishing Pier on the Gulf of Mexico, beginning Nov. 7.

The department rated it as “structurally deficient” during its last inspection.

“Here’s the deal, short and sweet: If this was not a planned repair, the bridge would possibly, eventually collapse,” Cedar Key Fire Capt. Robert Robinson said.

Doug Lindhout, 66, who bought a home with his wife Sandy in the island city in 2017, agreed.

“The old bridge needed to be replaced, unquestionably,” he said.

FDOT spokesman Troy Roberts said the $6.7 million bridge reconstruction project is due to be finished by late 2020. The department is funding it as part of a multi-faceted effort to repair Cedar Key’s bridges, though Levy County will manage any repairs and maintenance afterward.

“It’s just an age thing,” Roberts said. “Bridges only really last so long before they are up for replacement. With this one, it’s just time.”

According to the FDOT website, a structurally deficient bridge needs to be replaced within six years. The C Street Bridge earned that rating in 2016.

During construction a temporary bridge will be built just to the left of the current one, so vehicles and pedestrians will have access to Dock Street. The temporary structure will take away some of the parking lot by the Cedar Key Volunteer Fire Department, curving slightly to the left behind the Dockside Motel and ending in the same place as the current bridge, officials said.

“We plan on getting it done as soon as possible – at least by the end of the year we hope to have it up and running,” Roberts said of the temporary bridge.

According to FDOT, approximately 120 cars pass over the bridge daily. During the busiest time of the year, February through September, the traffic doubles, Sandlin said.

Twila Bars, a resident and treasurer for the Island Place Condo Rental Association, is worried that the construction will hurt her business and prevent residents from renting their condos.

The pending construction means “we will have to cut all of our prices,” Bars said, adding that “when people look at our website and see that, half of them aren’t going to come.”

Construction will occur on the new bridge from 7 a.m. – 7 p.m., Monday through Friday.

Bars, however, was still worried the noise would hurt her business.

“If you’ve ever been around bridge construction, they pound constantly,” she said. “It’s a constant pounding. Nobody’s going to come stay at our place.”

“Certainly, the music coming off of Dock Street sometimes at night is just as loud as the construction, so it’s OK,” he said.

The new bridge will be 3 feet taller than the current one, which will allow more boats to pass under. Lindhout said his 20-foot boat has a T-top that won’t pass under the existing bridge.

“I’m really happy I’ll be able to use it, and I know a number of other people who are in the same boat, so to speak,” he said.

Lee Murphy, 39, part owner of the Dockside Motel, at the corner of C and Dock streets, said the new bridge construction is “actually going to boost my business.” That’s because, Murphy said, some of the trees and other environmentally protected land just behind the motel will be shortened or removed to make way for the temporary structure. Once that area is pruned, he said, guests in rooms facing the firehouse will have a much better view.

Sandlin said that part of living in an older city is acknowledging that things will need replacing.

“Cedar Key’s resilient,” the police chief said. “We are going to adapt to whatever is thrown our way. It’s no different than anywhere else: We like to complain, but in the end, you adapt to it.”

Emily is a reporter for WUFT News who can be reached by calling 352-392-6397 or emailing news@wuft.org.
Previous The Point, Nov. 1, 2019: How Much Would Florida’s Teacher Pay Ranking Change Under The Governor’s Proposal?
Next Michael Reuschel Trial Continues With Testimony From Forensic Experts