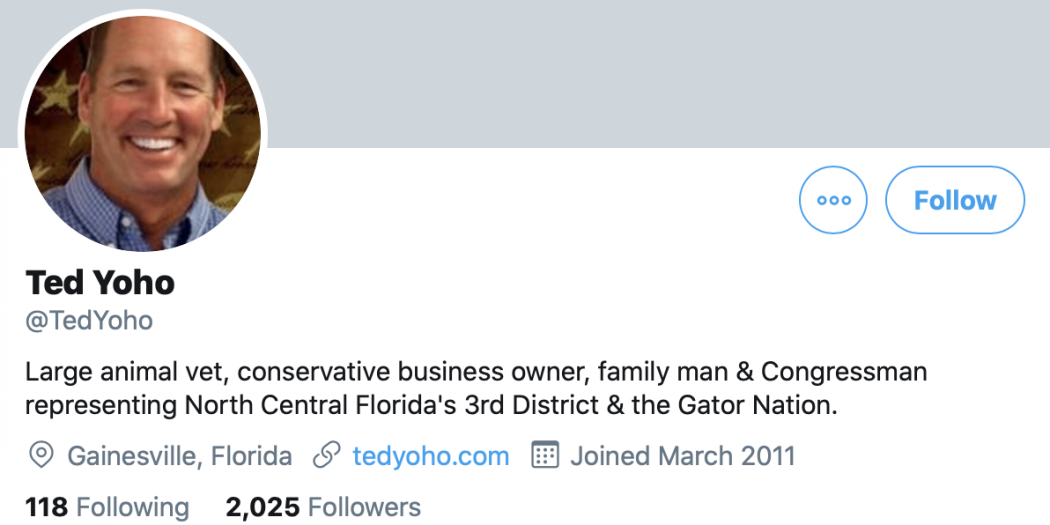 Twitter acknowledged late Thursday that it mistakenly shut down the personal social media account of Rep. Ted Yoho, a Republican congressman in Florida who is among President Donald Trump’s staunchest allies.

The company apologized to the lawmaker and promised it won’t happen again. For nearly 48 hours, Yoho’s account advised visitors that it was suspended for violating unspecified rules.

Twitter told Yoho’s campaign office that the @tedyoho account was mistakenly shut down because the company believed someone was impersonating the congressman, deputy chief of staff Kat Cammack said.

In a message to Yoho, Twitter explained: “Someone must have reported it. We apologize for our mistake there. The team has taken additional steps to make sure this doesn’t happen again.”

The mysterious suspension was certain to fuel complaints among conservatives that they are treated unfairly by Silicon Valley and its social media giants. Yoho’s personal account was never verified by Twitter, had only about 2,000 followers and averaged a few posts each month. The congressman’s official verified account, @RepTedYoho, was unaffected.

Cammack said the personal account was suspended shortly after Yoho had posted a link to the obituary of a local farmer, James Michael “Mike” Rich, with a personal note expressing condolences to the man’s family.

Twitter’s general counsel, Vijaya Gadde, did not immediately respond to an email request for comment.

Conservatives have complained for years that algorithms or deliberate actions by employees of social media companies have unfairly suppressed their messages online. Trump tweeted in July 2018: “Twitter ‘SHADOW BANNING’ prominent Republicans. Not good. We will look into this discriminatory and illegal practice at once! Many complaints.”

Twitter defined shadow-banning in a 2018 blog post as “deliberately making someone’s content undiscoverable to everyone except the person who posted it, unbeknownst to the original poster.”

Twitter’s Gadde responded to Trump’s claim in a 2018 blog post, saying, “we certainly don’t shadow ban based on political viewpoints or ideology.”

Cammack said she believes social media companies YouTube and Facebook in the past have unfairly censored content published by Yoho or his staff, but this was the first time an account had been shut down.

Earlier Thursday, Twitter said in its annual transparency report that it had seen an increase of 105 percent over last year in the number of accounts it had locked or suspended for what it described as rules violations. The company said increasing numbers of those locked or suspended accounts – more than half this year – were identified through automated means.

Twitter suspended Yoho’s account the same day he acknowledged in a CNN interview that he had not attended any of the confidential depositions from key witnesses in the Trump impeachment inquiry. As a member of the House Foreign Affairs Committee, he was entitled to participate in the interviews with those witnesses.

The mysterious account suspension sparked renewed speculation about Yoho’s retirement from Congress, since he previously vowed not to run for re-election next year. He has been flirting with reversing his decision, and filed as a candidate in 2020 with the Federal Election Commission.

“There was no intentional effort on our behalf to deactivate or delete the account as the congressman is still filed to run for the 2020 election,” Cammack said in an email.

Cammack said Yoho has not decided whether to run for re-election and will announce his plans in January.

Two new website addresses were registered in September under the names tedyohoforflorida.com and yohoforflorida.com, according to Internet records reviewed by Fresh Take Florida. Those were widely viewed as the clearest sign to date that he was considering running for re-election.

Federal campaign finance records showed that only a month earlier, Yoho’s campaign committee paid $111 to register unspecified Internet domains. The vendor in that transaction was Wix.com. Both addresses currently redirect visitors to TedYoho.com.

Cammack said she was aware of the new web addresses but declined to discuss them.

Karina is a reporter for WUFT News who can be reached by calling 352-392-6397 or emailing news@wuft.org.
Previous Oct. 31, 2019: Afternoon News In 90
Next Florida’s Statewide Teachers Union Visits Gainesville