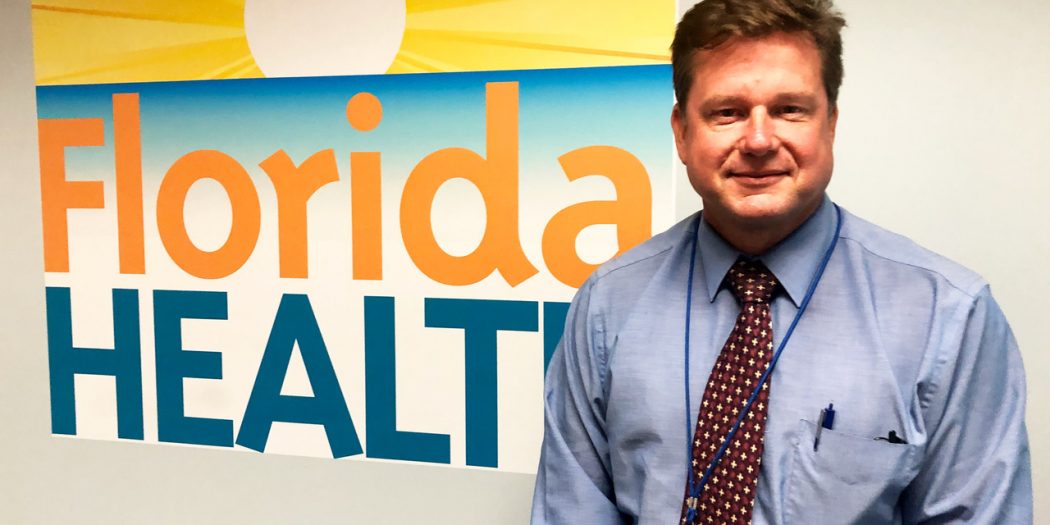 Paul Myers has been the administrator of the Alachua County Health Department since 2011. (Brittney Miller/WUFT News)

Dr. Nicole Iovine sees a steady flow of flu victims in the hallways every winter at UF Health Shands Hospital. The epidemiologist discusses the illness with her patients and offers antivirals. But, most importantly, she watches their progress with the flu. Carefully, she said.

“I wish people would come with me around in the hospital and see what happens,” Iovine said.

Control Flu, a vaccination program across the Alachua County Public Schools district, will immunize her children. But late federal changes to this year’s vaccine created a national shortage in FluMist, said Paul Myers, the administrator for the county’s health department.

The county requested 10,500 doses of FluMist, the nasal spray vaccination commonly used on children, Myers said, but it will only receive 4,200. The shortage in FluMist, which is manufactured in the United Kingdom, will be overcome by 5,200 regular flu shots, he said.

Myers said while the middle and high school vaccinations so far show slight progress from the last flu season, the county is seeing sporadic flu cases since the academic year began.

“We are bracing ourselves for a pretty severe flu season,” he said.

Flu vaccination rates rose nationwide during the 2018-19 season, according to the federal Centers for Disease Control and Prevention. The center’s most recent weekly influenza surveillance report stated that flu activity is slowly increasing in the U.S.

Flu season varies from year-to-year. Jerne Shapiro, a lecturer with the UF’s epidemiology department and the county’s former epidemiologist, said it typically begins in November, peaks in February and wanes in March.

Predicting its seasonal path is nearly impossible, though, Shapiro said.

“The whole influenza-trend thing is a bit of a crystal ball magic mixture,” she said.

Shapiro said a flu shot injects a killed virus while the nasal spray vaccination is a live virus. Contrary to popular belief, she said, neither make its hosts sick.

Elementary school pupils, who Myers lovingly calls “super-spreaders,” are the county school district program’s focus because of their hygiene – or often their lack thereof. Once noses start dribbling, a classroom becomes a “petri dish” for spreading the flu, he said.

“Children shed more flu virus for longer periods of time than do adults,” said Myers. “And that’s because their immune systems simply haven’t seen these viruses.”

Myers said the county could essentially eliminate flu outbreaks in the region by vaccinating 70 to 80% of these children. About 65% of its elementary pupils were vaccinated in 2015, Myers said.

But these rates crumbled after FluMist controversies took the product off the market for the next two years. County schools lost a huge chunk of their participants the following season, he said.

Florida’s flu vaccination rate ranked near the bottom among all 50 states during prior seasons, according to the Centers for Disease Control and Prevention. During the 2018-19 season, it ranked No. 46 for children’s vaccination coverage and No. 48 for adults.

This year’s shortage isn’t Alachua County’s first. Shapiro said one plagued it in 2004 when the line to get vaccinated “wrapped around the building.” In those cases, she said, the county prioritizes older adults, young children, pregnant women and people with chronic conditions.

That’s why Marie Okronley, the health care administrator for retirement community Oak Hammock at the University of Florida, literally knocked on wood when asked about the pending flu season. “In facilities such as this, it can go through like wildfire,” Okronley said.

Oak Hammock’s 143 most at-risk residents – those in assisted living, memory care or skilled nursing – form a third of its population, she said. Over 90% of them were vaccinated last season.

A few residents had influenza last year, but no case was severe, Okronley said. She credited the community’s proactiveness: Employees must be vaccinated or wear a mask during the season.

“We’ve been very lucky,” Okronley said. “But on the other hand, we’ve worked very hard at trying to keep the flu out of the building as much as we can.”

Catherine Morsink, 82, has lived at Oak Hammock for 15 years. The retired UF professor said she typically gets a flu shot every year and only had the flu once, after an international trip two years ago. Morsink said she spent the next two weeks quarantined in her apartment.

UF records show that its outreach levels now hover around 7,000 vaccinations per season. The records also show the center’s pharmacy ordered 8,510 vaccines so far this season.

“We are seeing students come in for flu-like symptoms earlier than we did last year,” Luna said. “But every single flu season is really unpredictable.”

Iovine said she’s concerned about the local flu season activity based on Australia’s highly active flu season. To prevent such an outbreak, the epidemiologist urged everyone to get vaccinated.

“If you’re superman or superwoman and you don’t think you can get the flu, what about your daughter – your child? What about Grandma?” Iovine asked.