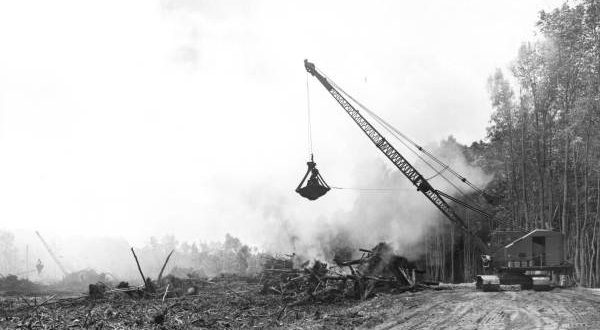 Original area being cleared and burned to create the Rodman Dam. (Courtesy of the Florida Memory Blog)

What’s The Next Step In The Lawsuit Over The Rodman Dam?

It’s 50 years and counting for this Florida battle.

One of those left standing is the Rodman Dam.

Located in both Putnam and Marion counties, the dam allows for the existence of the Rodman Reservoir. Additionally, the dam’s proponents say water there gets filtered through the dam and flows into the St. Johns River. Its opponents object to this notion, and plaintiffs in a lawsuit filed two years ago say the Ocklawaha River (adjacent to St. Johns) is harmed in the process.

The Florida Defenders of the Environment filed a federal lawsuit in 2017 against the U.S. Forest Service on the grounds that the federal agency’s permit to keep the dam expired in the 1990s.

Two years later, a federal judge on Monday made a decision in that lawsuit.

Harvey E. Schlesinger, the judge, came to the conclusion that his court didn’t have jurisdiction to rule on this case.

“The terms of the 1994 Permit outline the responsibilities of the holder of the permit to the USFS (U.S. Forest Service), not the enforcement responsibilities,” his ruling said.

Joseph Little, one of the lawyers with the Florida Defenders of the Environment who filed the lawsuit to remove the dam, said that they had about 30 days to decide their next course of action. They could either ask the judge for a rehearing or appeal the case to the federal circuit court of appeals.

“This is a once in a career kind of case,” Little said. “The FDE have been working to see the Ocklawaha river restored for 50 years now.”

Little went on to say that it is historically important to get the job done.

The Putnam County commissioner said he focuses on the thriving state of the Rodman Reservoir. Many wildlife and local fishermen flock to the chemical-free area.

“I get two to three letters a month from some group or another about restoring the Ocklawaha or some environmental issue,” Harvey said. “But if you go on Google Maps and look up where their organizations are based out of, they live in a concrete jungle. They live in all kinds of places that were once marshland.”

“How in the world do you justify that?” Harvey said.

Harvey prides himself on being environmentally conscious and thinks the Rodman Dam is key to that part of the state’s future.

“People want to talk about climate change, and the future of the state of Florida,” Harvey said. “But the Rodman Reservoir is 19 feet above sea level and has a steady flow of clean water. I think we’re going to rely on places like that in the future.”

Correction appended: A previous version of this story incorrectly stated that the Rodman Dam is the last vestige of Cross Florida Barge Canal construction. It is not.

Julia is a reporter for WUFT News who can be reached by calling 352-392-6397 or emailing news@wuft.org.
Previous Oct. 2, 2019: Afternoon News In 90
Next On The Suwannee River, A Surprise Boat Gift Between Longtime Friends