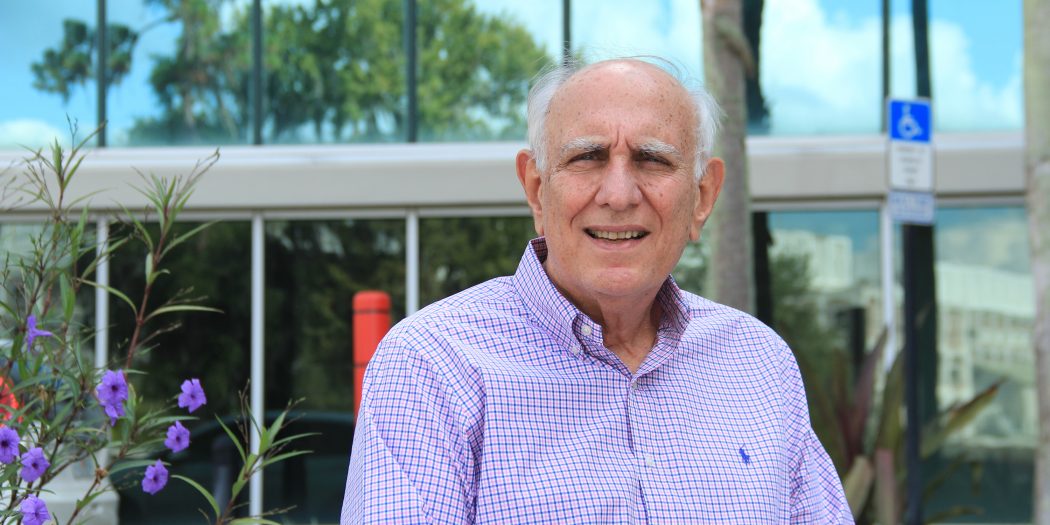 Dr. Frank Catalanotto, former dean of the UF College of Dentistry and current professor, outside of his office. "On the one hand, I want to get the public angry, I want the public to understand that in 2016, a half a billion dollars were thrown away for preventable dental conditions," he said. "And then I want people to know that there's a solution." (Kelly Hayes/WUFT News)

“I Want People To Know There’s A Solution”: A Fight To Provide Rural Dental Care

Outside the small town of Brooker, Florida, surrounded by cows grazing in oak-shaded fields, Dr. Paayal Bhakta manages the mouths of 30 to 40 patients in a day.

She has been doing it for about six and a half years.

Bhakta is a dentist and dental director at the ACORN Clinic, a low-cost health care center that provides services to low-income, rural residents in North Central Florida.

Bhakta and the other dentists at the clinic see more than 2,000 patients a year. The clinic just caught up on its dental care waitlist, but the list is quickly building up again.

That could change if the state approves a plan promoted by Dr. Frank Catalanotto, the former dean of the UF College of Dentistry and a current professor at the school. Catalanotto is working to improve dental care accessibility for residents around Florida by encouraging the state to approve the licensing of dental therapists, who are mid-level dental providers similar to physicians’ assistants in medicine.

Dental therapists are trained to do a small set of procedures dentists would normally do, but they cost less than dentists, Catalanotto said.

Although Catalanotto, working with the Floridians for Dental Access Coalition, failed the attempt last year to win legislative approval for dental therapists, they are working in the capital again this year to increase access to affordable dental care in rural shortage areas.

The lack of affordable dental care – or any dental care – is one reason the ACORN clinic in Union County sees so many patients, said Candice King, the clinic’s executive director.

ACORN will be phasing out its medical services by the end of this year, but will continue to provide dental care, which is a significant need of the community.

“Unfortunately, affordable dental care is unbelievably difficult to get,” King said. “We’ve made a difficult choice to close our medical clinic, but we’re very committed to doing what we can to keep our dental clinic open.”

In rural areas of Florida, while the cost is still a factor, even wealthier residents may struggle to find dental care due to a lack of dentists, Catalanotto said.

“Dentists, like any other professional, they want to work in a bigger town or city where they and their spouse can have the good things in life, their children can have access to good schools, and things like that,” he said.

Compared to other states, Florida has the largest population of people who live in dental health professional shortage areas. These areas, designated by the federal government, indicate a lack of access to dental services.

The state has 5.5 million people in these areas, and in order to treat them, the federal government estimates it needs 1,266 more dentists, Catalanotto said.

Florida also ranks fifth from the bottom when compared to other states in the percentage of children on Medicaid who actually received dental care (measured in the previous year).

Nationwide, 49% of children on Medicaid saw a dentist in 2017. The percentage in Florida was 39%.

Unmet need for dental care has a range of effects on the population ⁠— from poor health to the higher monetary costs of emergency room visits.

“Look at the other counties – you’ll see this very direct relationship between the number of dentists and the increased likelihood that residents are going to use hospital emergency rooms,” he said.

Not only does this lack of care lead to wasted resources, but it also impacts communities’ health.

In children, there is a direct link between poor oral health, including problems like cavities, abscesses, pain and infection, and poor performance in school, Catalanotto said.

In adults, poor oral health, specifically periodontal disease, is linked to diabetes, cardiovascular atherosclerotic heart disease and a number of other problems, he said.

“So not only does it cost society money when someone goes to the emergency room, but it costs society in another way because we have populations that have diseases at the very level that makes them more expensive,” he said.

The use of dental therapists may help solve this disparity by increasing access to dental care in a cost-effective manner, Catalanotto said.

Two to three dental therapists can be hired at the cost of one dentist, which can help in these rural shortage areas, he said.

Dental therapists have been used for almost 100 years in more than 50 countries outside the United States, including Canada, the Netherlands, England and New Zealand, he said.

The results: Between 2011 and 2016, the number of Medicaid children in Minnesota receiving dental care increased by more than 40,000. Since 2017, Minnesota dental therapists have provided more than 175,000 patient visits.

A 2016 study by the University of Minnesota found 90% of dental therapists patients were uninsured or on public assistance. These therapists are helping where they’re needed most.

Having already helped pass dental therapist licensing in 12 other states, Catalanotto said he believes it is possible to get the Florida legislature on board to allow dental therapists to practice.

He’s not alone in the effort.

The Floridians for Dental Access Coalition, to which Catalanotto belongs, consists of 51 organizations, ranging from the Alachua County Commission to the United Way of Florida. The coalition is working together to get the state to allow dental therapists. Catalanotto said there is one primary group opposing the practice: dentists.

This program, which passed in Florida legislature last year, requires participating dentists to work in underserved communities as well as be a Medicaid provider for a certain length of time.

“It’s very important that we have the highest qualified caregiver to provide the care to people who are in the most need,” she said. “Florida has a workforce that’s very significant and ready to serve. It’s a distribution problem.”

Another issue the FDA is concerned about is the length of time it may take to successfully implement a dental therapy program, Paramore said.

“It might be 10 years before they even start seeing patients with dental therapy,” she said. “Our citizens of Florida need help now. And the FDA is ready and willing to provide immediate solutions.”

However, near the end of negotiations and discussions in other states that authorized dental therapy, the Dental Association actually joined the coalition’s efforts and supported the final legislation, Catalanotto said.

He remains optimistic about the chances of winning approval for dental therapist licensing in Florida.

“I want people to know that there’s a solution,” he said. “This is a bipartisan issue. And in some states, near the end of negotiations and discussions, the Dental Association actually joined the efforts and supported the final legislation.”

Until these dental therapists are available to lighten her load, Bhakta will continue to help as many patients she can.

“Growing up, my parents, and my mom, asked that I always give back to the community,” she said. “ACORN offers just the best of both worlds. I can help people all day, I get to do something I love.”

The opinion Dr. Catalanotto shared are his own and do not necessarily represent the official viewpoints of the university.