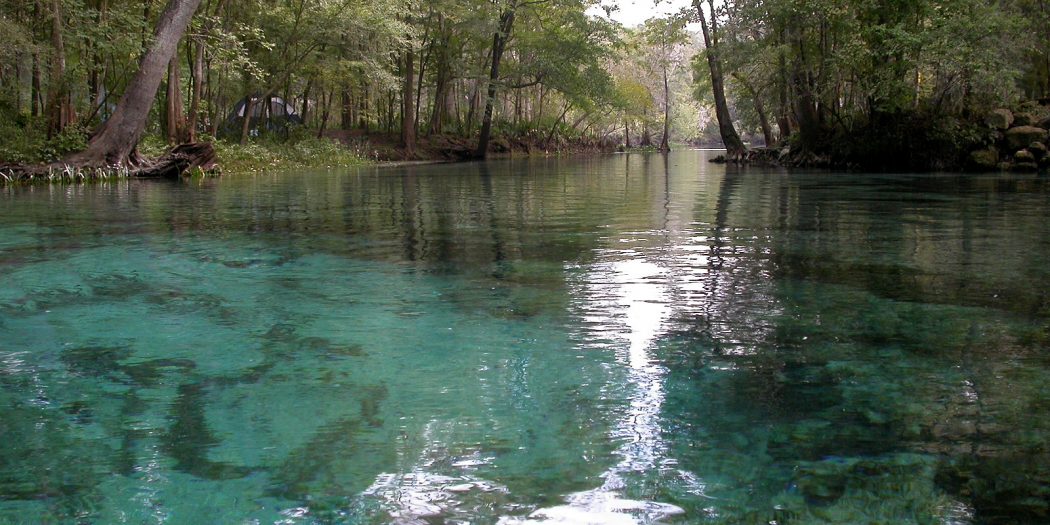 Environmentalists Speak Out Against Nestlé Permit

Local environmentalists are demanding government protections of Ginnie Springs, which they say would be destroyed if the Suwannee River Water Management District approves a pending Nestlé Waters North America permit that would allow the company to pump out millions of gallons of water from the springs daily.

The permit, if approved, would allow Nestlé to pump about 1.2 million gallons of water a day from Ginnie Springs. The spring is already classified as impaired, and local environmentalists argue that the permit would further damage the recovering waterway and surrounding community.

In a statement released Aug. 6, Nestlé emphasized that the 1.2 million gallons daily represents less than 0.5% of the average flow of the Santa Fe River at the Ginnie Springs site. The company is committed to sustainable water management, said Georgie Ring, Nestlé resources manager.

But area environmentalists are not comforted by this argument.

“That’s no small amount of water,” said Merrillee Malwitz-Jipson, a Santa Fe River resident and board member of Our Santa Fe River (OSFR), a non-profit organization aimed at protecting the water and land supporting the Santa Fe River. “Not by any standard.”

Nestlé is implementing a sustainability management process at the spring, Ring said. Measures will include installing a series of monitoring wells to measure water level and quality, using locally collected environmental information to develop a tailored sustainability approach, and diversifying their water sources throughout Florida to prevent over-pumping.

OSFR board members, including the group’s president, Mike Roth, have been outspoken in opposing the pending permit.

“When you’re not at minimum flow levels, everything you take is wrong,” said Roth, a Santa Fe River resident.

The entire Santa Fe region is classified as a cautionary area, Roth said. This means that it the state does not foresee being able to meet demand for this water in the coming years.

According to the Florida Springs Institute, Ginnie Springs’ health is classified as poor with an overall rating of D+. This indicates significant loss of ecological health and requires immediate intervention, according to the FSI conservation plan. Ginnie Springs feeds into the Santa Fe River, so worsening conditions may have far-reaching consequences.

Jim Tatum, board member of OSFR, said the state is neglecting the spring.

“The state is not doing its due diligence to maintain the spring,” he said. “What they are doing is allowing Nestlé to take water out, which is ironic and counterproductive.”

The Suwannee River Water Management District, a branch of the Florida Department of Environmental Protection, is responsible for approving the five-year renewal of the expired permit held by Seven Springs Water Co.

Nestlé purchased the High Springs factory, which is supplied by Seven Springs, in January. According to Nestlé’s website, the previous permit had been in use for 20 years and had the same maximum water usage amount. But the bottling companies were not pumping at capacity; the highest recorded extraction was 0.26 million gallons. Nestlé plans to use the full amount.

Dan Hilliard, president of the Florida Springs Council, wrote to Gov. Ron DeSantis Nov. 23 urging him to take action to protect the springs.

“It appears as though your administration has left the springs, rivers, and voters of north and central Florida behind,” Hilliard wrote. “We believe that the waters of central and north Florida are worth protecting.”

Hilliard is not the first community member to call for government action. A change.org petition opposing the permit has garnered more than 32,500 signatures.

Malwitz-Jipson argues that the government should provide the community with clean, reliable water in their homes and work to restore the fragile environment instead of relying on bottled water and allowing further degradation of natural resources.

“Water for the public consumption should not be privatized,” Malwitz-Jipson said. “This is a case of commodification of our natural resources.”

She said the use of bottled water provides local governments with an out from properly cleaning up their water and infrastructure.

“People are truly afraid of their water. If cities had clean water coming out of their wells,” she said, “bottled water would not exist.”

She urged government to focus on improving environmental conditions instead of allowing an arguably unnecessary industry to continue and profit.

“Protecting our natural resources financially allows us a better lifestyle, a better environment for our kids and for the future, and there’s the economic equation that often gets overlooked,” Malwitz-Jipson said.

Taxpayers also will have to pay for restoring any environmental damage done by this mass pumping, Roth said. Depletion of the spring likely will negatively impact existing water users and industries such as tourism should the spring dry up, he said.

“Nobody seems to mention the tourism,” Roth said. “When Ginnie Springs goes completely green, that’s a lot of lost revenue.”

The Suwannee River Water Management District does not have an estimated decision date for approval of the permit, as the application is currently incomplete, said Lindsey Garland, public communications coordinator for the branch.

Hanna Gibson is an environmental reporter for WUFT. She can be reached at hgibson1@ufl.edu.
Previous “I Want People To Know There’s A Solution”: A Fight To Provide Rural Dental Care
Next Dignity Village To Close Down As Grace Marketplace Gets New Funding