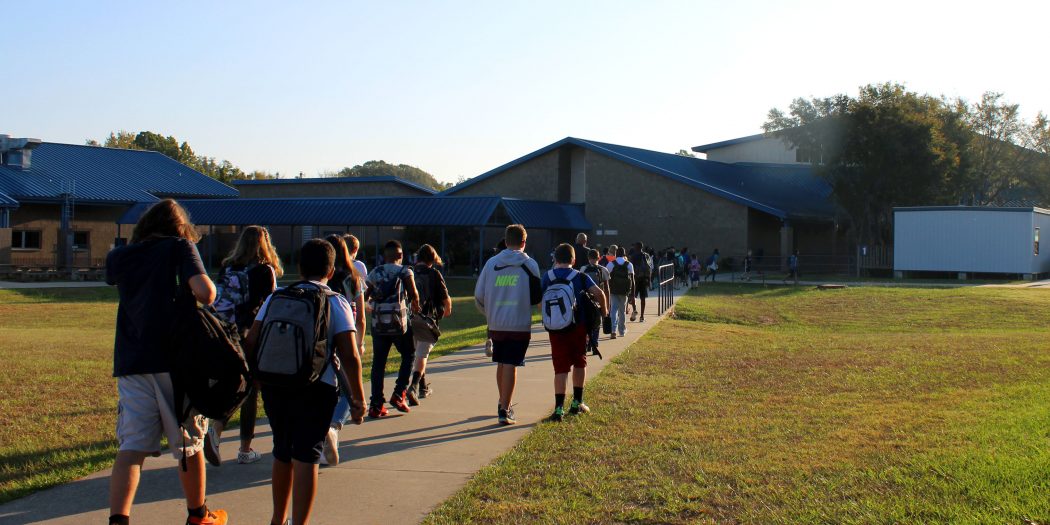 Students walk through the campus courtyard to their home periods at Oak View Middle School in Newberry. (Brittney Miller/WUFT News)

Laura Johnson’s 4-year-old son, Alexander, was three days away from entering his second year at William S. Talbot Elementary School in Gainesville when she and a group of other mothers went to meet with the new teacher. But the classroom was empty with the lights turned off.

The pre-K teacher next door told them there wasn’t one assigned for Alexander’s class.

“We realized this is weird – we have no teacher,” said Johnson, 34, a contract administrator at Infinite Energy.

Alachua County Public Schools began the 2019-20 academic year with 48 open instructional positions, according to Carmen Ward, president of the Alachua County Education Association, the union representing teachers. That number was reduced to 16 on Friday, said Kevin Purvis, assistant superintendent of human resources for the school district.

Substitute teachers filled the position for Alexander’s class until a full-timer took the position Sept. 10, according to Talbot Elementary principal Nannette Dell. That role had been filled during the summer; however, the hired teacher resigned for personal reasons, Dell said.

The principal said it was an uphill battle to find a suitable replacement.

“I wish I could tell you why we’ve had fewer and fewer,” Dell said. “But it just seems like over my career – it’s been my 10th year as a principal – that there are fewer applicants.”

Many of the openings were in the district’s most fragile schools, Purvis said. For example, there were two available positions at Idylwild Elementary and three at Lake Forest Elementary. Both schools earned D grades as calculated from a formula that measures student success using data from standardized tests and learning gains.

The growing district enrollment – now at 29,000 students – contributed to the high number of vacancies, Ward said. All but one of the teacher openings were at an elementary school.

“Of course, our goal is always to be needing zero classroom teachers, so we’re doing everything we can to be able to assist our schools in hiring those positions,” Purvis said.

Oak View Middle School didn’t fill all of its vacant positions until late summer, said Kelly Armstrong, the principal. The school’s student population has grown more than 50% in six years, he said. On campus, he pointed to where a new building will house 17 classrooms to accommodate the growth. He knows it will be more than a notion to recruit enough teachers.

“It’s about creating a climate in our schools where teachers want to teach,” Armstrong said.

Like other schools in the county, Oak View lets teachers forgo their planning period to pick up an extra class. In return, they receive an increase in pay, Armstrong said.

Bernard Baez, 49, is one of 17 Oak View teachers who forfeited their planning period. His incentive: to support his two children in college. Because teachers don’t get paid that much, Baez said, “That little extra helps out a lot.”

Bill French III, 33, who spent eight years in the Marine Corps, wanted to translate his childhood love of school into a fulfilling job as an instructor. He is one of five new instructors at Oak View.

“I knew getting out of the military, I still wanted to give back to my community,” French said. “I love this area, and knowing that there’s a lot of kids and they want to learn, they need teachers.”

Ward, herself a middle school faculty for 27 years, said the union has begun negotiating salaries after an $8 million increase to the county’s education budget. She said low pay is contributing to a teacher shortage across the state.

“We call it the ‘silent strike,’” Ward said. “This is how teachers are striking: They’re walking out the door.”