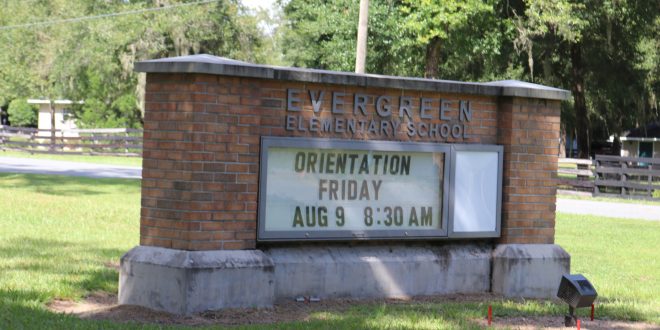 In May 2017, the Marion County School Board contracted Educational Directions to improve Evergreen, which has received failing grades since 2013. One year into the two-year contract, Evergreen received another D. (Tobie Perkins/WUFT News)

At last month’s Florida Board of Education meeting in Lakeland, Marion County Superintendent Heidi Maier approached the stand. “I bring with me today a sense of urgency and a heavy heart,” she said. She was proud of the progress Marion County public schools have made since 2016, citing improvement in most of the district’s school grades. But she wanted to discuss one of the remaining two D schools in Marion County — Evergreen Elementary.

During the 2016-2017 school year, Evergreen failed to bring its grade up from a D, which is based on Florida Standard Assessments scores. It had received failing grades since 2013. The state of Florida mandates that schools receiving either an F or two consecutive D grades must develop a  “Turnaround Plan” to improve the school. Schools are given one year to improve before the state intervenes, implementing one of five plans: district control, closure, reopening as a charter school, takeover by an external operator or a hybrid of any two options.

On May 22, 2017, the school board contracted Educational Directions, LLC for a maximum of $401,600  to improve Evergreen within two years beginning with the 2018-2019 school year. One year into the contract, Evergreen received another D.

Maier requested the district terminate its contract with Educational Directions.

“We’ve got kids to take care of,” she said. “I don’t feel like this sense of urgency is shared by the external operator, and that’s why I’m here.”

Educational Directions submitted data that does not reflect district assessments, she said.

“Along with Superintendent Maier, we believe that if you have a failing record, you should not be renewed,” Corcoran said.

Educational Directions provided to the district their year-end report, which projected a C grade for Evergreen and showed significant improvement. Joe Desensi, president of Educational Directions, said the company worked to create a new culture of learning at the struggling school. The report highlighted a 51% decrease in student disciplinary infractions. Desensi also pointed to a slate of family activities like “Daddy & Me Reading Night,” and “Pastries for Parents,” organized by school staff to increase parent engagement, a key to enhancing learning.

The QSMA data also does not necessarily correlate the school’s grade, said Budd, because school grades are based on learning gains and proficiency. The QSMA is only based on the number of questions answered correctly.

Desensi said Evergreen missed the mark due to several obstacles at the school.

All of Evergreen’s students are classified as economically disadvantaged and many of them struggle to find reliable transportation to and from school. Nearly 50% of teachers for the 2018-2019 school year were new hires and novice teachers and many students struggled to overcome math and reading deficits from prior years. Desensi said that while he did predict Evergreen would receive a C for the 2018-2019 academic year, he knew it would be close and was sure the school would make it next year.

Stacy also stressed that school grades do not provide the whole picture of a school. While many schools in Marion County improved this year, this was due to learning gains, not proficiency, she said.

Both Stacy and Desensi pointed out that the gifted program at Evergreen was moved to South Ocala Elementary for the 2018-2019 school year, which could have affected the overall proficiency. Thirty-three fourth and fifth-grade students transferred out of Evergreen.

Desensi expressed his disappointment in the abrupt dismissal of Principal Livingston.

“I’m so sorry that he won’t be there next year to see them get their C,” he said. “It’s unfortunate that he was caught up in the fray.”

He felt confident that after two years, Educational Directions would have been able to turn the school over to Livingston.

Several Evergreen parents spoke with WUFT about their disappointment in this decision.

“(Livingston) believes in the students and does his best to create a safe learning and teaching environment,” said Adrian Terry, mother of a fourth-grader at Evergreen.

Suzanne Atkinson, a disabled mother of two Evergreen students, remembered Livingston assisting her to get to her daughter’s classroom so she could meet her teacher. He would walk in front of her truck and guide her around to the back of the school, she said.

For the 2019-2020 school year, Evergreen will have a new outside operator, a new principal and most likely a slate of new staff.

Only teachers classified as “highly effective” or “effective” will be kept on. Teachers in Florida are classified according to four levels of effectiveness.

It remains to be seen what the key to success will be for the Ocala school as systemic poverty and socio-economic barriers weigh heavy on the students and staff, but Evergreen is not alone. Nearby Oakcrest Elementary also received D grade, for the seventh year in a row. Marion County School board contracted Jayne Ellspermann, LLC to take over both Oakcrest and Evergreen beginning with the 2019-2020 school year.

Stacy is optimistic about Ellspermann’s appointment. Ellspermann is a former Marion County principal and was chosen as the 2015 National Principal of the Year for her work at West Port High School in Ocala.

“If anyone can help these schools, she can,” she said.

Tobie Nell Perkins is a general assignment reporter for WUFT. She can be reached at news@wuft.org or (352)294-6397
Previous Gainesville Residents Uncertain On City’s Quest To Build Its Own Internet Network
Next Alachua County Commission Decides To Repeal Plastic Ban After Lawsuit Threat