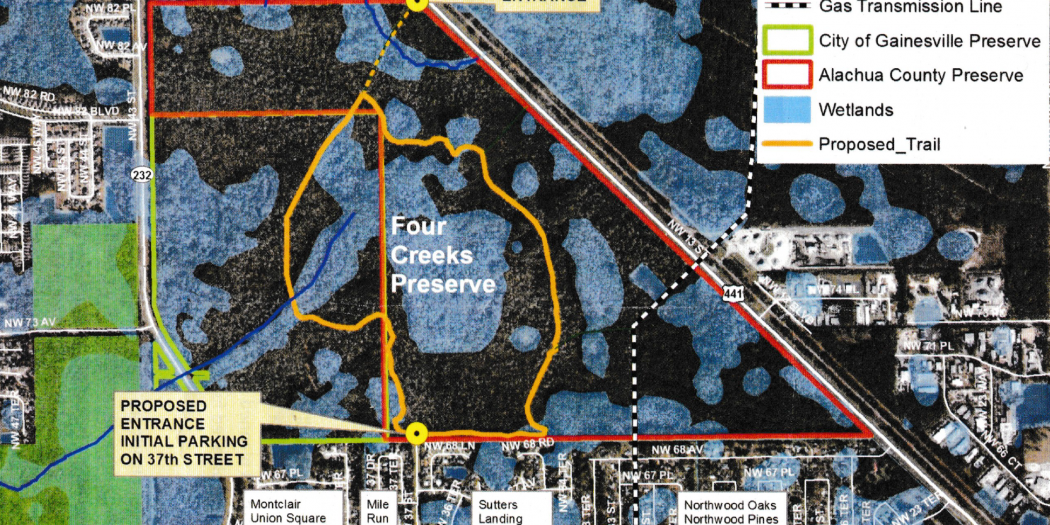 This initial public access plan was given to meeting attendees. The proposed trail is highlighted in orange. Proposed entrances are indicated by yellow dots at the north and south borders of the property. (Courtesy of Alachua County)

Residents living where Northwest 37th Street dead ends in Gainesville were excited about plans by the city and county to soon open the first trail in the new Four Creeks Preserve.

That was until, however, they learned that nature lovers from near and far would park their vehicles close enough to see into their homes and hear conversations in their backyards.

“It is a dead-end street where there are established neighborhoods that are quiet and do not have through traffic,” Mike Cook, 72, told county and city officials at a recent public meeting about plans for access to the preserve. “Now we will have through traffic.”

Alachua County and Gainesville together in 2018 bought 715 acres of property from a Boca Raton developer named Arthur Weiss. The preserve is located near Gainesville’s northern city boundary between U.S. 441 and Northwest 43rd Street.

The county paid $2.9 million for 467 acres; the city spent $1.5 million for 245. They funded it partially through the Wild Spaces Public Places half-cent sales tax that voters approved in 2016.

The long-term management plan for the property is still being developed, but the first trail is set to open on Sept. 28, which is National Public Lands Day, officials said at a July public meeting.

The 2.5-mile trail will extend across both the city and county’s portions of Four Creeks. Other trails are expected to open on the property in the future, said Andi Christman, the site manager for the property, who works for the Alachua County Parks and Conservation Lands Department.

City and county officials have spent the past several months conducting research on the property to make sure it would not be damaged by public use. They also have been identifying environmentally sensitive areas and mapping out trailheads on the preserve.

Residents said at the meeting, at Trinity United Methodist Church, they were relieved that the land is now a preserve. They had once feared it might be used for commercial purposes.

Then Christman revealed plans for using 37th Street as a temporary parking lot.

Most affected would be properties along the block-long, two-lane street that dead-ends into the preserve and is between the Mile Run and Sutters Landing neighborhoods.

Christman said officials are considering whether and where to build a permanent park area elsewhere on the preserve property. But she said that could not happen before Sept. 28, in part because of a lack of deceleration lanes and access to major roadways.

Anyone parking where Christman suggested would have to park just a few yards from the 8-foot wood fence that separates Mile Run and Sutters Landing from 37th Street.

The residents replied at the meeting with concerns about privacy and security.

“Why can’t that other entrance be on 43rd, where there are no houses and no neighborhoods?” one resident yelled from the back of the room. “Why do they have to be on ours, where we have enjoyed our wildlife and have such a safe neighborhood?”

The residents also said vehicles have from time to time already gotten stuck in the ditches along the fencing. Some have already had to be towed. Twice, according to one resident who did not want to be identified, another resident’s back fencing needed to be replaced after cars became trapped on the other side of his property. That expense always falls on the homeowner.

Other concerns included poor drainage and litter in the area.

“I have tried several times to get the city down there to repair those ditches,” Winston “Buck” Snowden, 88, whose backyard abuts 37th Street, told the officials.

Christman said she and other county and city officials would take note of the residents’ concerns.

“We are using this meeting to make sure we are not on a track that is terrible for residents,” she said.