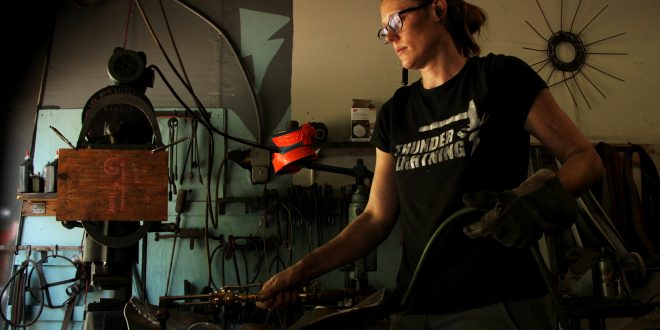 Tharp spent two weeks in Maine as a teacher’s assistant for John Rais at Haystack Mountain School of Crafts. After being there, she wanted to teach in those types of situations again. (Kylee Gates / WUFT News)

The clanking of a hammer against metal can be heard from outside her garage studio with the smell of gas and steel wafting in the heat.

Leslie Tharp, a 33-year-old Gainesville resident, spends her time transforming scraps of metal into works of art. When Tharp isn’t working on commissioned projects for businesses, the city of Gainesville and individuals, she’s teaching classes and leading workshops on blacksmithing.

In early July, Tharp was selected as a teaching assistant by John Rais for a two-week workshop at the Haystack School of Craft in Maine. Rais is a nationally recognized blacksmith, designer and sculptor from Massachusetts who is commissioned for his one-of-a-kind work. Rais was honored with an Arts/Industry Residency at the John Michael Kohler Arts Center in 2006, and his pieces have been featured in various books and magazines, as well as museums and galleries.

Tharp’s latest sculpture is for Green Acres Park, a Gainesville park, on 643 SW 40th St. She was commissioned by Gainesville to create a metal support that looks like a plant for a tree that is not growing upward. After a few months of sculpting and painting, her work is now available to see and the official ribbon-cutting ceremony is planned for September.

Tharp said her inspiration comes from the world and how humans interact with it. Depending on the project, she makes sure her work tells the story of the place it’s destined for. Tharp also finds blacksmithing to be therapeutic. “There’s something similar to yoga and meditation that I find with being a blacksmith,” Tharp said.

Tharp’s favorite part about being a blacksmith is taking rudimentary elements, like fire and force, and getting an immediate result. “Whether it’s a long-term six-month project or a one-hour project, I show up and enjoy seeing the materials and the object develop before my eyes,” she said.

Kylee Gates is a general assignment reporter for WUFT. She can be reached at news@wuft.org or (352)294-6397
Previous Muslim Youth Summer Camp Builds Faith Through Fun
Next Gainesville’s Cost For School Resource Officers To Increase