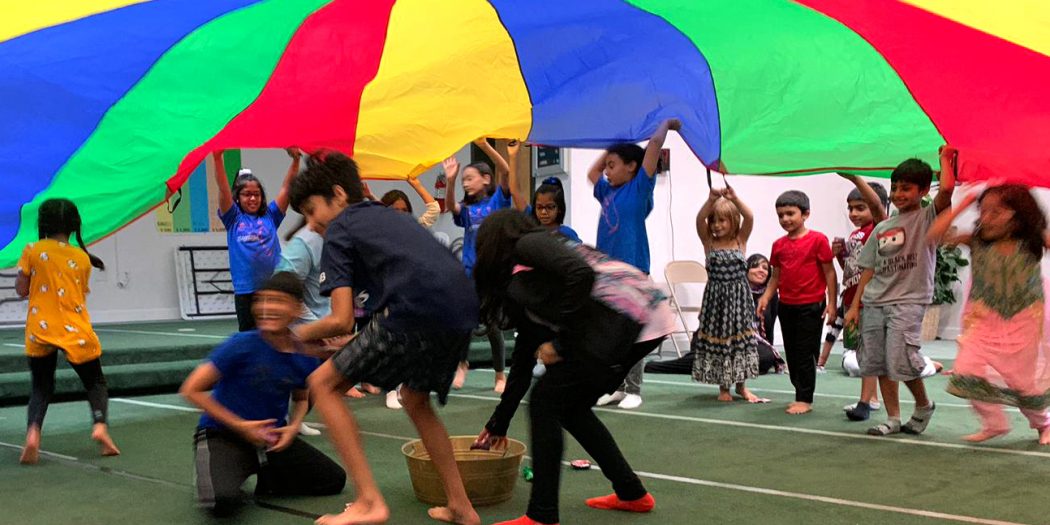 Muslim Youth Gainesville youths join together for a round of parachute tag. during summer camp. (Sarah Elzawahry / WUFT News)

Zara Sherif, 8, threw on her backpack and said goodbye to her friends as they scurried to their parents’ cars outside Meadowbrook Elementary. School was out for the summer, and usually, Sherif watched her friends head off to vacation bible school. But this year, summer was different for her.

Sherif joined 20 Muslim youth for a summer of learning, playing and giving back to the community through Gainesville’s first Muslim faith-based summer camp.  Muslim Youth Gainesville’s camp meets once a week from May through August and alternates between two mosques, Hoda Center and Islamic Center of Gainesville for activities that teach Islamic principles and prayers. The camp is free and open to children ages 6-12.

Umbreen Jabbar, 38, founder and director of Muslim Youth Gainesville, founded the camp for Muslim children to build a sense of community, ownership and responsibility.

“I hope the kids will build on their relationship with God, build ties within the community, have fun and learn to serve others through all of these meetings that we continue to have,” Jabbar said.

Jabbar moved to Gainesville from Chicago where she helped start a similar Muslim youth group. She said she created the youth group for kids to have fun, while taking part in positive growth.

“When I came to Gainesville, I knew they didn’t have a youth group,” Jabbar said. “The fact that I have two young children made me even more passionate to create one.”

Jabbar, who earned her master’s degree in elementary education from the University of Florida, said she loves working with youths. The Okeechobee, Florida, native launched Muslim youth groups in four different towns in 15 years.

The children begin their day at the mosque to learn different duas, or prayers. After these instructional sessions, they engage in games that put a spin on traditional games, like relay races, to learn more about Hajj, the Muslim pilgrimage.

To celebrate Eid, a major Muslim holiday, the campers decorated Rice Krispie Treats shaped like the star and moon, symbolic of the holiday. Sherif says the Eid gift exchange was one of her favorite camp activities, as children drew names to select a small present.  The exchange gave the children a chance to celebrate the holiday spirit.

Maryam Rahman, a local mother, sends her two daughters to camp to have a shared sense of Muslim community and friendship. She also hopes they will learn the masjid, or mosque, can be fun.

Rahman grew up in Panama City, Florida, and said she was blessed to come in touch with other Muslim girls through family friends. Today, these girls are still her closest friends.

“I hope they will learn some Islam but mostly that Muslims are their friends and their best support system,” Rahman said.

Amar Attia, 49, the sheik at Hoda Center for the past 13 years, said the camp is important to create a positive Muslim narrative amidst negative news surrounding Muslims.

“The first word revealed in our religion was ‘read’,” Ateyah said. “The more these kids read and know, the more they will grow.”

The youth group allows kids to find their identity and learn their religion among others with similar values.

“It’s critical to get to know one another,” Ateyah said. “The minute we know each other in goodness, the more we can grow together.”

Outside of their faith-based activities, campers visited Palm Garden of Gainesville, a senior living community to read riddles and jokes to the residents.

“Our goal this year was to incorporate more one-on-one time,” said Kala Fuhrmann, spokesperson for Palm Garden. “They loved getting closer to the kids through trivia games and the stories they share.”

Ahmed Elmahdawy, vice president of the Hoda Center for 20 years, says growing up Muslim in Gainesville can be difficult at times. Elmahdawy moved to Gainesville in 1991 when there were Muslims in the community.

“My Sunday school class had only three people,” Elmahdawy said. “Youth groups like MY Gainesville can bring kids together in their faith identity.”

Elmahdawy said an influx of American Muslims in 1995 sparked a change in the Muslim Gainesville community.

“That group, those who were born here, added a lot of changes in Gainesville,” he said. “They formed Islam on campus and really invested in the city.”

Elmahdawy said youth camps like Muslim Youth Gainesville let children know they are not alone and can help them connect with others.

“These kids come from different backgrounds, but they are united in their faith,” he said.

Sarah Elzawahry is a general assignment reporter for WUFT. She can be reached at news@wuft.org or (352)294-6397
Previous Aug. 1, 2019: Morning News in 90
Next Local Metal Artist Finds Beauty Through Sparks And Flame