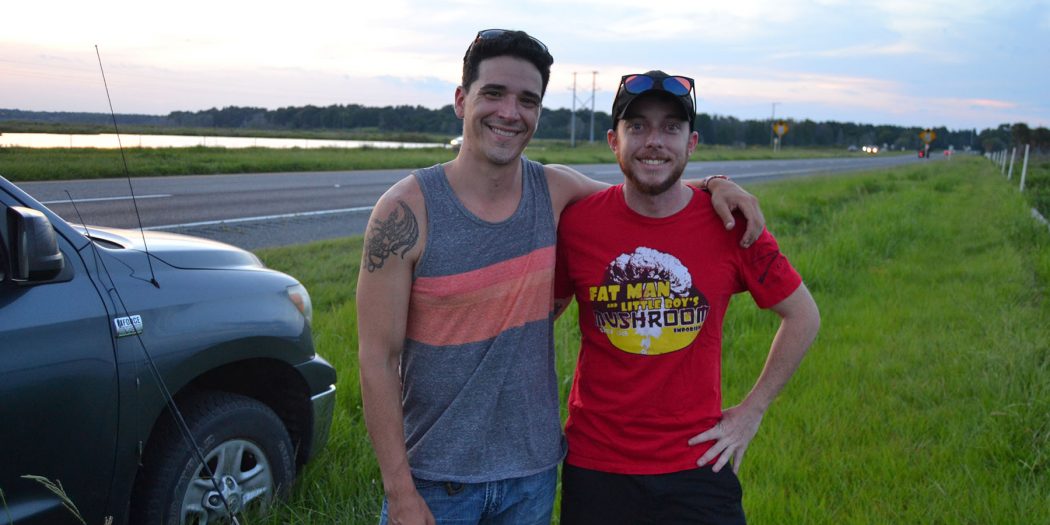 Leo Gonzalez and Chris Sills enjoyed their evening fishing at Paynes Prairie along U.S. 441, speeding cars and all. They fish on a stretch where Alachua County is considering building a linear park. (Eve Rosen/WUFT News)

Alachua County Commissioners Want To Build A Linear Park Along U.S. 441 Through Paynes Prairie. They Need $3 Million To Make It Happen

Paynes Prairie Preserve State Park is home to many sights including wildlife, such as alligators, rabbits and an abundance of birds, but it might be most famous for its gorgeous sunrises and sunsets.

For that reason, Wednesday night was a special night for Chris Sills. He is colorblind. Wednesday was not only his first time going to Paynes Prairie, but also his first time seeing a sunset in color, with help from new color-correcting glasses.

“This was the first time I have ever seen a legitimate sunset in my entire life, and that was pretty tremendous,” Sills said. He shared his inaugural Paynes Prairie fishing trip with friend Leo Gonzalez, who often fishes at the prairie and typically catches something.

In recent months, Paynes Prairie has become a popular spot for fishing, but it isn’t the safest.

The strip of state park along U.S. 441 can be a dangerous area because cars speed past anglers at 60 mph or more.

“I come here very often, and the cars do come by very quickly, but,” Gonzalez said, “you get used to it.”

The linear park would be a means of keeping pedestrians and anglers farther away from the busy road. A guardrail will also be put in place down the entire length of Paynes Prairie, providing some additional protection.

“It would definitely make me less worried walking around here and worrying about snakes,” Sills said.

Commissioner Robert Hutchinson proposed the idea of putting a cantilever platform attached to the guardrails that people could use to fish in the marsh.

The County Commission asked Dawson and Hays to write a letter to the Florida Department of Transportation regarding the linear park when state funding opportunities become available.

County staff estimated the linear park would cost around $3 million to build. Funding from the Wild Spaces Public Places half-cent sales tax could be used, but it may impact the county’s ability to complete other previously identified projects.

“I do not want any Wild Spaces Public Places money. I have no problem with doing a transportation alternative application,” Commissioner Ken Cornell said.

Cornell said he thinks the linear park is below the other previously identified projects in priority.

The linear park would be put behind the guardrail to protect the bikers, those fishing and the sunset seekers.

“If you are putting in a guardrail, you are already acknowledging that there is a safety issue, and they [FDOT] are saying that the guardrail is safer than anything that is behind it,” Dawson said.

The motion, spearheaded by Mike Byerly, was to create a standard form letter that outlines the recreation facilities that the County Commission would like to see the state help fund.

Construction of the linear park would begin in 2021 with the contract being put out sometime in 2020.

“Unfortunately the road is right there,” Gonzalez, one of the anglers on Wednesday night, said, “but at least it’s relaxing.”

Everitt is a reporter for WUFT News who can be reached by emailing news@wuft.org or calling 352-392-6397.
Previous The Point, June 27, 2019: From Property Cards To GIS: How The Property Appraiser’s Office Has Evolved During Ed Crapo’s Tenure
Next Democratic Presidential Debate, Night 2: Live Fact-Checking And Analysis