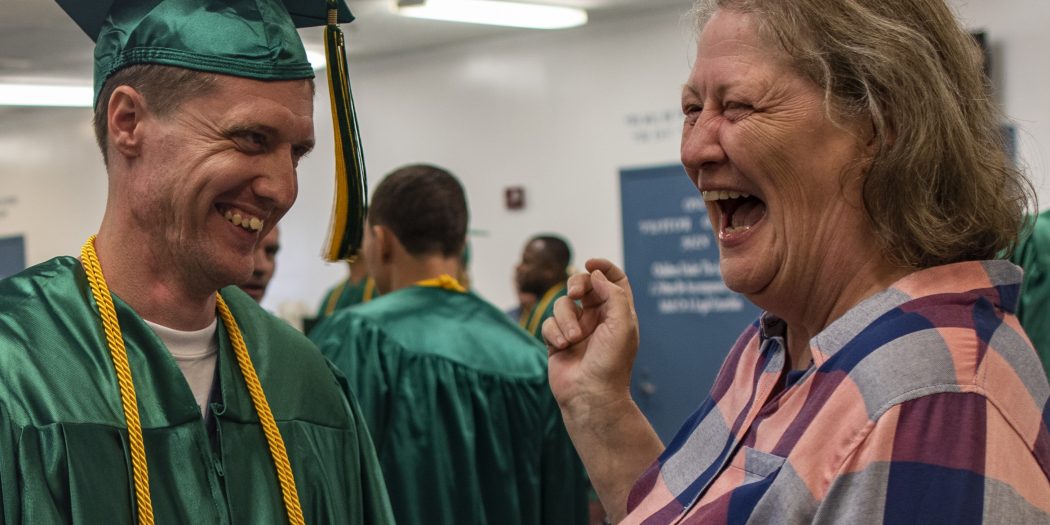 John Wise and his mother, Linda Wise, celebrate in the Columbia Correctional Institution after he received his associate degree in environmental science technology from Florida Gateway College through the Second Chance Pell Pilot Program. [Aaron Ritter/WUFT]

John Wise has spent nearly half his life in prison.

In 2002, at 18 years old, he was charged with second-degree murder in the death of his roommate. His sentence was 22 years.

His mother, Linda Wise, mourned the future of her only son. He would grow from a boy to a man behind bars. But on Friday, he fulfilled a dream she long thought dead.

Cheered on by a crowd of 200 family members and staff, 47 graduates entered to “Pomp and Circumstance.” They donned emerald green robes, their grey-blue prison uniforms underneath, shoes polished to perfection. Forty-four graduates wore golden honors cords.

The celebration was three years in the making. In 2016, Florida Gateway College approached Kristina Hartman, former Chief of Programs at the Florida Department of Corrections, about becoming part of the Second Chance Pell Pilot Program.

They chose a difficult place to start; Columbia Correctional was known for its challenging inmates. But Hartman agreed. “If it works here, it can work anywhere,” she said. In a state where 96,000 people are incarcerated, the Second Chance Pell Pilot Program could help countless inmates receive college degrees.

The Second Chance Pell Pilot Program distributes federal grants to inmates, covering books and tuition. Hartman knew the money would be well spent. She said a recent study by the RAND Corporation shows that offenders who participate in any type of education (vocational, GED or post-secondary), are 43% less likely to return to prison.

Developing the pilot program wasn’t easy. Teams of employees helped choose the inmates who would benefit most from the program. A building onsite was remodeled into a classroom. All of the students moved into one block, where they could live and study together. Security was assessed at every turn.

To prisoners like Wise, the rewards were obvious. The prison block was just as loud as the ones they had been in before, but now people were talking about American history and mathematics. Time moved more quickly. The inmates learned to work together and help each other.

Wise tutored other inmates and was chosen as the student speaker, in lieu of a valedictorian.

His mother had always viewed her son’s sentence as a mistake, but she said now it made sense. “If you have faith,” she said, “and I do have faith, then this was all part of his path.”

His statistics professor, Frederick Douglas, said he recognized Wise as a leader from day one. Wise was only one of the many students that would excel over the course of the semester.

“These are the best students I’ve ever had,” Douglas said. The inmates had some of the highest grades and GPAs he had ever seen.

Wise, now 35, addressed his classmates, “Education saved my life.” Knowledge is power, he said, and knowledge had given him power over his life.

Hartman now works for the Texas Department of Criminal Justice, but she drove straight to Columbia Correctional from the airport Friday morning. “I wouldn’t miss it for the world,” Hartman said.

“For the past two and a half years, we have not been truly incarcerated,” Wise said in his closing remarks. “We found escape.”

One by one, the graduates crossed the stage, their families cheering. Linda Wise was among them, tears in her eyes. “I don’t know if I’ve had a prouder moment in my life,” she said.

Once everyone was seated, lead by the president of Florida Gateway College, the inmates moved their golden tassels from the right to the left. They were now the class of 2019.

Tobie Nell Perkins is a general assignment reporter for WUFT. She can be reached at news@wuft.org or (352)294-6397
Previous The Point, May 21, 2019: Florida’s Death Penalty System Gets Another Look From State Supreme Court
Next D’Alemberte Remembered As ‘Definition Of A Statesman’