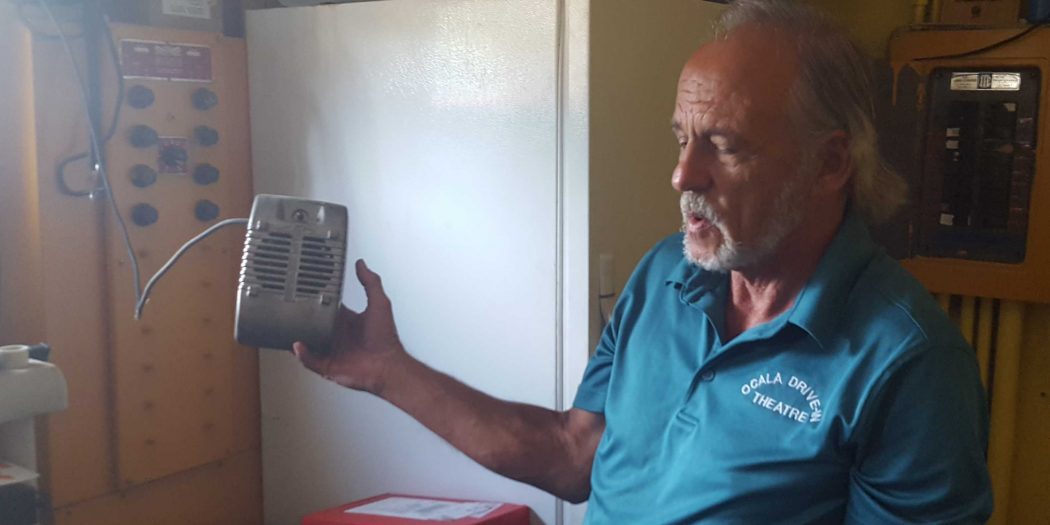 John Watzke displays an old drive in car speaker. In the 1950s and '60s, drive-in speakers were mono and of very poor quality. Car stereos today at the drive-in are tuned into a FM radio station for sound. (Jacob Schofield/WUFT News)

The Ocala Drive-In Theatre has had many owners during its 71-year history, and John Watzke has owned it for the past 16.

The 62-year-old oversees one of the few drive-in theatre sites left in the country. The 12-acre venue at 4850 South Pine Ave. remains a popular draw, with the most followed Facebook page in Marion County.

Pricing is competitive compared to walk-in theatres: tickets for adults are $6, children six age through 12 are $3, and children five and under are free. Besides the Easter egg hunt, the drive-in involves the community in many other ways. They are pet-friendly, but Watzke adds one caveat.

Watzke is proud of the many special events he facilitates at the drive-in.

This year he is expecting 400 Boy Scouts for a campout in November and 1,000 Girl Scouts in December.

He does wedding proposals, prom proposals (he’s never known a girl to say no), baby gender reveals, anniversaries, birthdays and even an Easter egg hunt for the holiday this year (pictured at right). Watzke said digital technology allows him to make unique memories for his guests.

“If they send me a picture and what they want, I’ll put it together and transfer to the format I need for the projector, and I’ll do that for free,” Watzke said.

When there is a “promposal,” parents sit in the back and take pictures silently. Watzke remembers a military man who proposed marriage to his girlfriend with Watzke’s help. The couple had their first date at the Ocala Drive-In Theatre.

Watzke is proud to be planning on bringing back his live shadow cast for “The Rocky Horror Picture Show.” They build a stage in front of the screen for the shadow cast — a feat unheard of for drive-ins, according to Watzke.

“They said it couldn’t be done,” he said.

Watzke comes from a family of projectionists in New Orleans. He had always wanted to own his own drive-in.

He said people thought he was crazy. He admits running the site is a lot of work and that he does most of it himself with a small staff to help during showtimes and on special occasions. He said most people his age have some sort of hobby. This is his.

Watzke said the beginning of Daylight Saving Time in the 1970s is one of the reasons drive-ins started to disappear. In the summer, drive-ins barely had time for a single movie. The second reason, according to Watzke, is that too many people were bringing in their own food and drinks. Watzke said in the 1950s and ’60s, there were 6000 drive-in theatres in Florida

Every town had two or three.

According to Watzke, each of the 321 remaining sites nationwide makes little off of ticket sales.

“I didn’t switch over to digital until I was forced to, and that was November 2013. All the film companies got to where they were not releasing film,” Watzke said.

Film companies get more than half the revenue from every ticket sold, Watzke said. He makes about $1.20 off on an adult ticket.

The Ocala Drive-In Theatre makes up the difference in its concessions. Items like popcorn and drinks are less than half of what they are at walk-in theatres. The menu is large and prices low to encourage people to use concessions instead of bringing food in.

“Drive-ins can’t make it off of 20 percent of ticket sales …Without the concession sales we can’t survive,” Watzke said.

The lightbulb in Watzke’s larger projector costs $3,000 to replace. The bulb lasts three months, which is about 500 hours of use and 87 to 88 days of movies, depending on length. Walk-in theatres get, on average, 1,500 hours out of their bulbs.

“What I make off of ticket sales would barely cover the electric bill and the lightbulbs,” Watzke said.

The projector for the Ocala Drive-In Theatre’s main screen was custom-made and cost $96,000. It takes a 6,000-watt lamp and projects its picture 197 feet.

Every little bit of light affects Watzke’s drive-in — even the moon or running lights in a vehicle.

Watzke built a second screen and projector in 2016. He said he was doing fine with one screen until film companies, like Disney, required theatres to keep movies for three to four weeks. His guests only would want to come once a month. He built his second screen in order to better rotate movies.

The national average of time people are willing to travel for a walk-in theatre is 12 to 13 minutes according to Watzke. The average for drive-ins are 40 to 45 minutes. People regularly come to the site in from 2 to 3 hours away.

He attributes his popularity to his personal touch.

Below: Hear Watzke discuss the technological changes at drive-in theatres like his in Ocala.

Jake is a reporter for WUFT News who can be reached by emailing news@wuft.org or calling 352-392-6397.
Previous High Springs Business Owners Reject Pushy Sales Tactics For Banner Ads
Next Alachua County Will Have Bilingual Ballots And Poll Workers At 2020 Elections