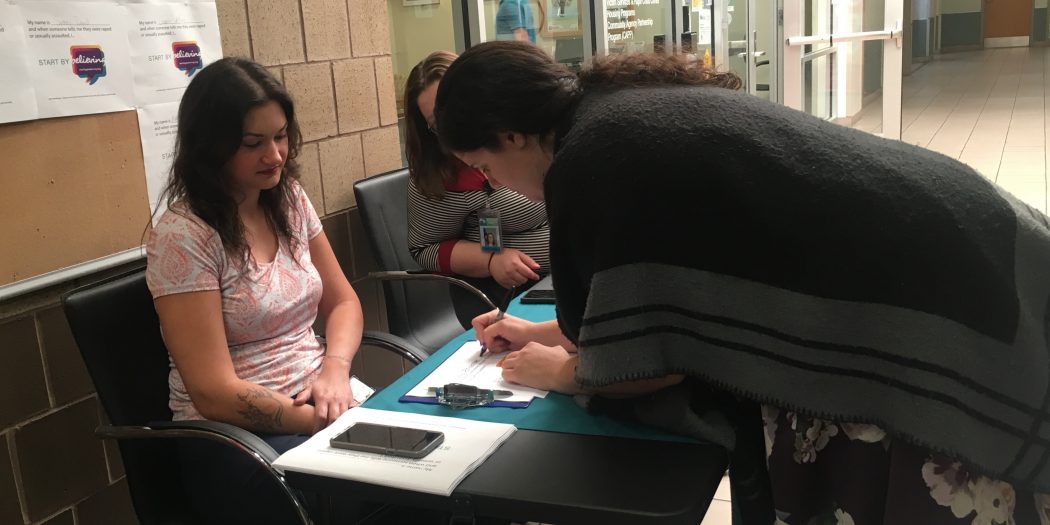 According to the National Sexual Violence Resource Center, one in five women in the U.S. will be raped at some point in their lives, but only 37 percent of sexual assaults are reported to police.

Hoping to help combat the problem, the Alachua County Coalition Against Sexual Violence is promoting a local Start By Believing campaign during Sexual Assault Awareness Month in April.

“We want to address that fear of not being believed,” said Jessie Lazarchik, assistant manager for the sexual assault program at the Alachua County Victim Services and Rape Crisis Center.

Speaking at a pledge signing event the center held recently at the Alachua County Community Support Services office on Southeast 24th Street, Lazarchik added, “If you come forward, you’ll be met with support, and we’re going to listen to you and believe you.”

After signing the pledge, supporters are encouraged to use the crisis center’s free services, if needed. They include a 24-hour sexual assault helpline, counseling and support groups.

The advocacy group End Violence Against Women International initiated the Start By Believing campaign in 2011 to inspire a change in the way people respond to reports of sexual assault.

The campaign is happening in 44 states as well as in Canada and Africa. Eight cities in Florida are also part of the campaign including Orlando, Punta Gorda and Palm Beach.

The coalition began discussing plans to join the campaign in October as a way to let survivors know that free and confidential services exist. It also wanted to join after seeing coverage of sexual assaults increase in the media over the past few years, Lazarchik said.

The campaign hopes to help both men and women.

Days for Girls International, a nonprofit that makes reusable menstrual supplies, signed the pledge after realizing many of the girls it has helped over the years have gone through sexual violence, said Radha Selvester, chairwoman of the organization’s Alachua County chapter.

“Many of the girls we serve in developing countries are at risk for several of these things,” Selvester said. “Some of them end up being trafficked and sexually assaulted.”

Survivors of sexual assault also signed the pledge. One survivor, Jamesha Carter, who was assaulted at age 12, said it’s important to ask victims what happened, and help them through the healing process by taking them to the police to file a report.

“When women say they were assaulted people should take it seriously,” Carter said. “I’m a survivor of that, and I want people to believe me.”

Although Start by Believing encourages people to support victims, its promoters said it is still important for law enforcement to not ignore evidence that may or may not exonerate someone who is accused. The campaign simply wants a starting point for a thorough investigation.

In 2017, there were 123 arrests related to forcible sex offenses, such as fondling and rape, in the Eighth Judicial Circuit of Florida, which covers Alachua, Baker, Bradford, Gilchrist, Levy and Union counties. In 2018, there were 50 rape arrests in Alachua County.

The number of offenses may actually be higher since sexual assaults continue to be the least reported crimes, Lazarchik said.

“Historically, sexual assault and sexual violence are crimes where there’s a lot of bias and that creates a lot of barriers for survivors coming forward to feel like it’s safe to talk about,” she said. “Part of these efforts are to try and address that and undo some of that bias that may exist.”

Lakshmi is a reporter for WUFT News who can be reached by emailing news@wuft.org or calling 352-392-6397.
Previous The Point, April 8, 2019: ‘It Doesn’t Work,’ Gainesville City Commissioner Says Of Current Efforts To Stop Dog Attacks
Next Firefighters Lobby State To Pass Cancer-Protection Bill