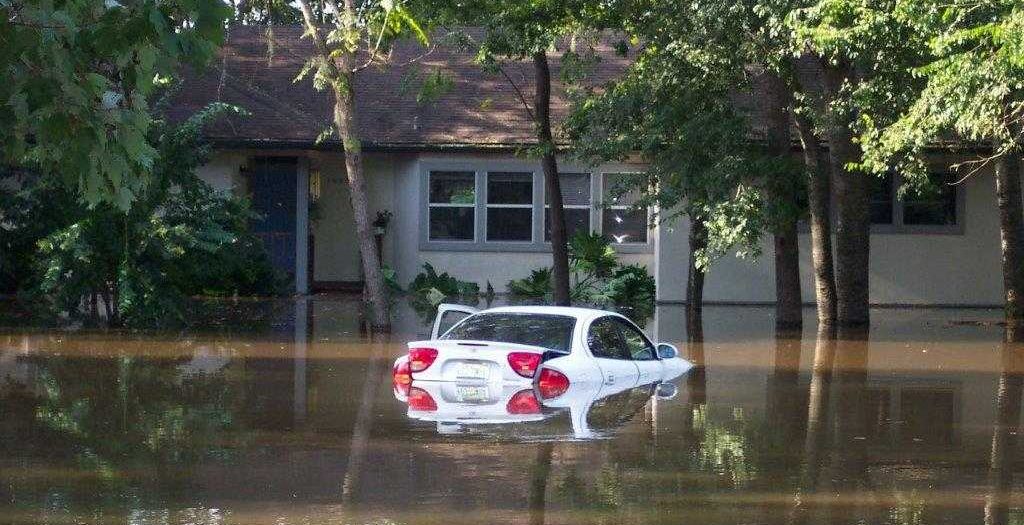 A car submerged in floodwater on Northwest 25th Place in the Hills of Santa Fe neighborhood after a storm in 2004. (Photo courtesy of Amy Jo Smith.)

Residents of a Gainesville subdivision are frustrated with the county’s lack of support in solving a repeated flooding problem. As hurricane season approaches, those residents are concerned for their safety.

Flooding has historically blocked the only entrance and exit to the public road for Hills of Santa Fe, located at Northwest 98th Street and Northwest 25th Place. Residents are asking the Alachua County Commission for help, as infrastructure remains unchanged and new neighboring developments threaten additional drainage into the subdivision.

Resident Iris Hart said she is particularly worried about this year’s flooding due to a new highly elevated apartment complex, Twenty-Three West, across Northwest 98th Street. In January, after a Sunday morning storm, Hart saw water gushing and rising from across the street.

Hills of Santa Fe could now receive rainwater run-off from the north, south, and east, Hart said. The subdivision sits between and below two other subdivisions and a golf course.

“There have been some major private works projects that have changed the way water is behaving,” said Commissioner Robert “Hutch” Hutchinson during a Thursday budget meeting. “We’ve put a lot of pressure on these systems, and now everyone is starting to see where they are failing.”

Jo Smith, a Hills of Santa Fe resident since 1984, said residents fear first responders will be unable to reach them quickly. Twice since 2004, the county has implemented a temporary emergency access route through private properties in the subdivision. This solution has made some residents feel unsafe.

It took more than a day to make the 2017 emergency path through private properties from Northwest 25th Place to Northwest 23rd Avenue, Smith said. When it was completed, Smith said, she feared damaging her car or getting stuck while driving on the muddy and rocky road.

Hart said she and Smith are among the residents who have a greater chance to access an emergency exit and avoid water damage during a storm. Both homeowners live in the more elevated portion of the subdivision.

Others aren’t so lucky, Hart said. Residents living in the midst of high flood waters are isolated and blocked from immediate assistance.

Luisa Peña lives in one of the three houses that flooded during Hurricane Irma. Peña’s experience having a home underwater has led her to fight for change, not just in Hills of Santa Fe, but in other areas of Alachua County.

“Our fight against the county commissioners has been futile,” Peña said. “We have been made promises only to have those promises retracted and underwater.”

“When we went to the commission meeting, one of the things we were told is (Hills of Santa Fe) shouldn’t have been built there because it is a draining field,” Hart said.

On March 21, 2019, the county commission discussed stormwater assessments, roads, and flood issues during a budget meeting. Commissioners acknowledged the issues faced by communities like Hills of Santa Fe, but said there are legal and financial limits to funding a fix.

“Do we expect taxpayers throughout the county to take responsibility for these kinds of personal loss?” Wheeler wrote in an email regarding Hills of Santa Fe. “It is an ongoing discussion we are having at the BOCC as we watch weather patterns change.”

Ramon Gavarrete, the county engineer in the Alachua County Public Works Department, said the county commissioners had not allocated money to fix the flooding problems in Hills of Santa Fe.

“To do a fix so that the public entrance road does not go underwater, we would need to establish a special assessment district to pay for that cost,” Gavarrete said.

Alachua County spokesman Mark Sexton said a special assessment district is established after figuring out what needs to be fixed, determining a price for it, polling the people in the designated area and seeing if they want to pay for it collectively.

If so, the government can institute the fix and put into effect a special assessment, he said. Once in effect, the property owners will gradually pay for the improvements through higher taxes.

The property owners would need to do this for their neighbors, he said. But so far, no one has offered.

Alachua County Environmental Protection Director Chris Bird proposed general funding for a basin management action plan during the meeting. This plan for alleviating flooding could legally use a portion of county money because of its pollution-reducing qualities.

Once the project becomes more specific and localized, the general funding is gone, Bird said. Ultimately, a special assessment will be required.

Commissioner Mike Byerly said he doesn’t want to start spending money if he doesn’t like the result.

“If the end game is we almost certainly require an assessment, then I don’t see people even wanting us to start,” Byerly said.

As for now, Smith, Hart, Peña and their Hills of Santa Fe neighbors will prepare for what is destined to come: water.

“Our best bet is to stop complaining and buy canoes,” Hart said. “That’s the one thing that the county has not suggested that the residents do.”