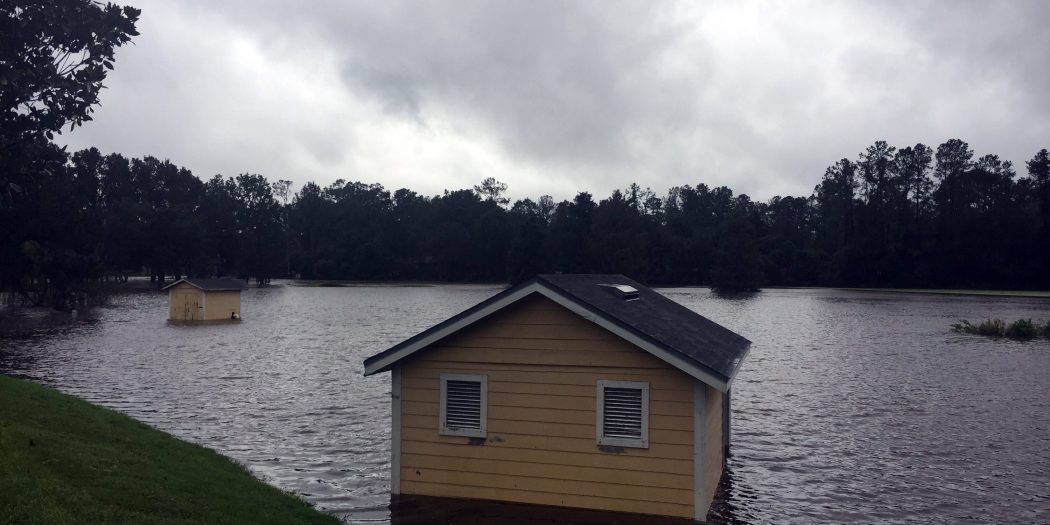 Areas along NW 98th Street and other nearby neighborhoods dealt with flooding from Irma last month. However, this isn’t a new issue. There have been many other instances of flooding. One of the major ones was in 2004 when multiple hurricanes impacted Gainesville.

Irma caused the majority of Meadowbrook Golf Club to be flooded especially by the south end, as NW 98th Street had to be closed because it was covered in water and some homes in the Charleston section of the Meadowbrook neighborhood had some water damage outside of their properties, Ligammare said.

The Hills of Santa Fe neighborhood also received a large amount of flooding from Irma. Pena’s house is one of the first three homes in the neighborhood that received the most damage.

The flooding was so bad in the neighborhood, her family had to use a canoe to get around.

“We knew about the flooding that happened in 2004, but yet we were told the county had corrected the issue from the realtor, and the county never corrected the issue,” Pena said. “I can’t afford to move. I love my home. Right now I can’t afford to move anywhere … so, where do I stand and what’s going to happen next year? I can’t go through this every year.”

“We were just raising questions of what we can do as a community, and we as people were upset about the flooding,” Menoher said. “(The board) said ‘well why don’t you guys get together and talk about it?’ So really that’s what happened.”

Initially, the committee included only the Meadowbrook Homeowners Association community, but later was extended to other residents. At a meeting on Oct. 8, residents from other communities affected by flooding such as Hills of Santa Fe, Eagle Point and Pine Hills Estates joined the group.  Pena was one of the residents who joined. The committee has held its meetings at the activity center in the Meadowbrook neighborhood where attendees have shared their flooding issues and collaborated possible solutions, Menoher said.

“The overall goal is to get the county to act and provide residents relief from flooding of their property,” Menoher said in an email, when asked about the goal for having the committee. “They have the technical knowledge and resources.”

The committee is trying to get the county to take responsibility for the flooding issues in their neighborhoods, Pena said.

“We are trying to resolve this,” Pena said. “We want action taken.”

Alachua County had a Stormwater Master Plan put in place that was completed in 2010. “(It) included conceptual projects to address flooding but the projects themselves have never advanced beyond the concepts that were presented for it,” said James Link, Alachua County Public Works Stormwater Engineer.

One of the things the committee hopes the county will take action on is approving a Stormwater Master Plan that will help with the flooding.

One of the several topics that has been discussed at the meetings is the flooding problems at the Meadowbrook Golf Club, which goes through the Meadowbrook neighborhood homes.

When the area was first constructed, it was supposed to be a 55-plus retirement community with a golf course, but over the years, they have become separate entities, said Ed Guthrie, resident of Meadowbrook and president of the Meadowbrook Homeowner’s Association.

Even though the golf course is the area getting flooded the most, residents are still worried about how it will affect them.

“We’re very concerned about the golf course flooding because you know we need to have a successful golf course around us. We live in it,” Menoher said. “We want to have it successful, so our home values are maintained.”

The committee has also discussed flooding at the Hills of Santa Fe at its meetings.

Pena has shared her concern about the development for 23 West Apartments on NW 98th Street and NW 23rd Avenue. She claims that it is what caused the flooding at her house after Irma.

Meadowbrook resident Steve Garrahan mentioned at one of the committee meetings that he saw it flood during the storm and one of Pena’s neighbors, David Martinez, caught it on video.

Hills of Santa Fe resident David Martinez took a video of some of the water flooding out of the 23 West Apartment construction site on NW 98th Street after Hurricane Irma.

“That area is prone to flooding because that area is what we call a closed basin,” Link said. “There’s no outlet for runoff to go to, so the runoff accumulates.”

It is hard to say that the new development is what caused the major flooding after Irma, Link said.

There have been at least three major flooding events near the land where the 23 West development is being constructed before anything was done to the site at all. Water has been coming off of that property for years because it is at an angle, said Dave Stockman, director of real estate at Viking Companies, the company building the 23 West development.

Flooding is a problem in that area due to elevation and because of a combination of a couple older designed areas that had different standards for storm water basins. The area should be in better shape than it has been under the natural conditions and there should be less water coming out of the site now, Stockman said.

The county has asked them to be supportive and the 23 West development is currently working on a stormwater management system to handle the runoff. The stormwater basins were already being built before Irma hit and now it is closer to completion, but the speed of building the system didn’t change after the storm passed, Stockman said.

“We overdesigned our retention to try and make the situation better, … but the situation was there well before we made the site,” he added.

Committee attendees have also discussed how the county didn’t come out to help with the flooding problems after Irma in the Meadowbrook area and Hills of Santa Fe neighborhood and only brought out pumps to get the water off of NW 98th Street, Pena said.

“As soon as the water cleared up on the street, they were out of there,” Pena said.

The county didn’t continue pumping out water that was in the Meadowbrook area and Hills of Santa Fe area after the storm because it is private property, said Alachua County Commission Vice Chair Lee Pinkoson.

“The county needed them (the pumps) elsewhere, so the county had accomplished what it needed to as far as making the road passable, but then it was needed someplace else as I understand it,” Pinkoson said.

On Sunday, Oct. 15, the committee held another meeting with 11 residents attending from Meadowbrook at Gainesville, Hills of Santa Fe, Fletchers Mill and Pine Hills Estates. Some things they discussed were the points made at the last meeting, new information some residents wanted to share about the subject at hand and different ideas the county could implement to fix the flooding.

One of the major points discussed was how many developments that have been made in recent years around their neighborhoods don’t have retention ponds or have inadequate ones because the standards were different during the time of their construction, which has factored into the flooding in their neighborhoods, especially from Irma.

“The issue here is that primarily we had 13 inches in a very short period of time …  and Meadowbrook and some of the areas around there are at the bottom of a basin,” Pinkoson said, when talking about flooding after Irma. “Even if there were absolutely no buildings or structures or anything along those lines some of it is just the land itself couldn’t absorb all that water and would have gone to … where nature would take it. Some of that is … going to flood no matter what and some of these (developments) were done in a fashion (where) the standards were different. They were done for a 25 year event as oppose to a 100 year event.”

The committee wants the standards to be changed for new developments in the future, so more runoff doesn’t come off of the sites and make the flooding even worse in their neighborhoods.

“We have to make noise in order to get something done,” said Ligammare during the meeting on Oct. 15.

“(We wanted) to hear the input of the residents number one and number two to see if maybe there were some suggestions that we could use in the future you know when something like this happens again,” Pinkoson said.

Several residents from the committee attended including Menoher, Pena and Pine Hills Estates resident Joanna Caputa to share their grievances from Irma.

Committee members Anne and Graham White, who live in Pine Hills Estates and received bad flooding in their backyard after Irma, and Garrahan also attended an Alachua County Board of County Commissioners Public Hearing on Tuesday, Oct. 10. During the public comments portion of the meeting, they mentioned their flooding issues and expressed their opinion on how the county should help.

They plan to continue attending public hearings and speak to county employees until something is done about the flooding.

“We’re frustrated,” Caputa said during the committee meeting on Sunday, Oct. 15. “This is not rocket science.”

The committee made meetings with some county employees, so they can discuss the flooding issues personally. On Monday, Oct. 16, Caputa, Menoher and Ligammare had a meeting with James K. Harriott, Deputy County Manager for Public Works and Growth Management, and Pinkoson, Menoher said.

“We told them about our multi-community resident meetings,” Menoher said in an email. “We wanted to share our neighborhood experiences with them and get information on the county’s plans for storm water management as well as ask questions about permitting, regulations, the roles of water management districts, FEMA and other agencies. We asked how to work with them and they said to keep meeting with them as well as other commissioners. The meeting was very helpful and they were very accommodating.”

On Tuesday, Oct. 17, several committee attendees also took Harriott and Pinkoson to some of their homes in Pine Hills Estates, Hills of Santa Fe, Meadowbrook at Gainesville and around the Meadowbrook Golf Club to give them “specifics on their flooding problems and hear options to remedy them,” Menoher said in an email.

The county has taken some steps to try to resolve the problems residents across Alachua have dealt with from Irma.

The county has “fiddled around with” the idea of buying homes that are flood-prone, so they can increase basins for water retention. It is something they are having Public Works look into as an option and see if it should be implemented, Pinkoson said.

Recently, the county also received FEMA flood maps. “We asked our Public Works director if he could compare … what the FEMA maps said and what was the actual situation as far as was there in fact flooding or was there not flooding,” Pinkoson said, when talking about historically known areas that tend to flood. The county has requested they come back with different options to fix the issues soon so it can be mentioned during a public meeting the county is holding on Dec. 5, which will discuss solutions for the flooding problems people are having, Pinkoson said.

Committee attendees are planning on going and hoping the meeting will result in a new plan to solve flooding issues.

“Bottom line is everything has to start at the county,” Caputa said during the committee meeting on Sunday, Oct. 15. “… The county has to propose solutions.”

Summer Jarro is a WUFT news reporter and third-year journalism student at UF who can be contacted at 352-392-6397 or s0945834@ufl.edu.
@summerjarro
Previous Gainesville Youth Chorus Invigorates Community Despite Budget Cuts
Next In Photos: Gainesville’s Annual Pride Festival

As rescue efforts continue in Southwest Florida, first responders from around the country are joining in.