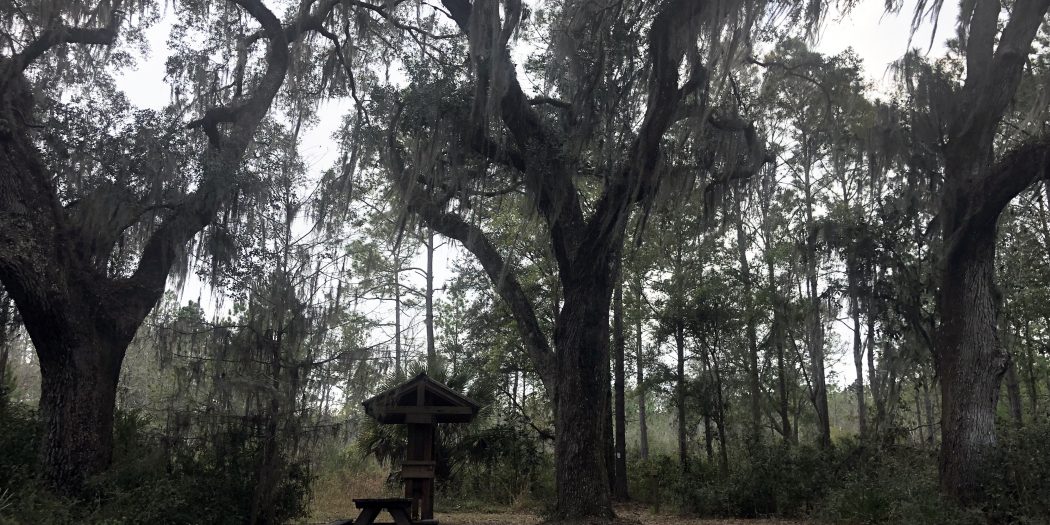 Down a pot-holed gravel street off Hawthorne Road lies a picnic table and a map kiosk, leading visitors to one of Alachua County’s hidden treasures.

Witness Tree Junction, a trailhead along the Gainesville-Hawthorne State Trail in Prairie Creek Preserve, features towering pine trees and swampy soil. Lush with mosses and ferns, the spot is a popular destination for bird watchers and hikers.

At the entrance of the junction, three live oak trees stand in a row, each with carvings that signify a historical event happened here.

While “witness trees” are spread throughout the United States, each one has gained the name for different reasons, usually related to the trees having witnessed a unique event.

“These trees have witnessed all kinds of things,” said Alachua County Commissioner Robert “Hutch” Hutchinson, who was born and raised in East Gainesville.

Hutchinson, the former executive director of the Alachua Conservation Trust, oversaw the trust’s purchase of the 606 acres that make up Prairie Creek Preserve, where the witness trees are located.

He said the trees saw Georgia Colonel Daniel Newnan and 100 of his soldiers march through the junction during the Patriot War of 1812.

Newnan wanted to capture Black Seminoles, who came to Florida as runaway slaves from Georgia and the Carolinas, living near Native American Seminoles and bring them back to Georgia to be bought and sold as slaves.

Hutchinson said Newnan lost the battle with many of his soldiers killed, and the Seminoles pinned his troop down for nine days before Newnan withdrew.

Hutchinson also said the Rochelle witness trees were originally marked by a surveyor for the Florida Southern Railway, N.R. Gruelle. In the 1800s, surveyors would put a stake in the ground to mark the corner of a property and carve trees with three horizontal lines to mark opposite ends of the property.

Near the now-defunct town of Rochelle, Gruelle carved the lines into three live oak trees, now more than 150 years old, that faced the railroad junction he had built.

“Those are a few of the remaining trees with his marks on it,” Hutchinson said.

The Florida Southern Railroad line stretched from Ocala to Palatka, and creating the stop in Rochelle helped the town grow economically, Hutchinson said.

While the railroad was open, 25 trains stopped at Witness Tree Junction every day. Some carried goods, produce and lumber, while others carried travelers.

Hutchinson said that when the railroad had to switch from a narrow-gauge track to a standard-gauge one, workers completed the 30-mile job in one night.

“Picking up that many rails, spiking them, re-spiking them – it’s a lot of work, and it shows you how important this rail was,” Hutchinson said. “They wanted 25 trains to run the next day.”

What could be more interesting, however, is how the town’s name is connected to its history.

According to State Library of Florida records, the town was named Gruelle in 1881 to honor the original surveyor until it officially changed to Rochelle in 1884.

Rochelle’s name can be traced as far back as the 1840s when former Florida Gov. Madison S. Perry owned 3,000 acres in the preserve and coined it Perry Junction. Perry and his family made a prominent impact in the area, with his daughter Sallie Perry donating the land for the first local white school, Martha Perry Institute.

Martha Perry was the governor’s wife, and the city was named after her side of the family, the Rochelles.

“Those witness trees probably had something to do with the lineation between the railroad and (Gov. Perry’s) property,” Hutchinson said.

Not only is this location rich in history, but it also has the power to inspire, as it did for poet and former University of Florida professor Sidney Wade, who named a poem after Witness Tree Junction.

Wade, 67, and her partner Woody Hartman, 77, are part of the Alachua Audubon Society, and they go bird watching every weekend. The last time they visited Witness Tree Junction, Wade said thousands of robins flew in the treetops.

“More and more people are becoming birders and becoming enthusiastic about going out in the woods,” Wade said. “And it’s so good for your body, and you get to see these beautiful things.”

Melissa Hill, the community outreach coordinator for the Alachua Conservation Trust, has been visiting Prairie Creek Preserve for the last six years. Because her office is located on the land, she often hikes the trail before or after work.

“Right now it’s springtime, and all these beautiful flowers are starting to bloom and the trees are getting their leaves back,” Hill, 25, said. “Just the sounds and colors that you get – it’s a vibrant, beautiful place and it all starts at Witness Tree Junction.”

After learning about what the landmark witnessed, Hill said she was most surprised by how infrequently she, and everyone else, stops to think about how dense history is in natural areas.

“It feels like this timeless secret,” Hill said. “It’s this place that’s always there, but few people come and explore it.”

If there’s one thing Hutchinson, Wade and Hill can agree on, it’s that they all encourage residents to get outside and venture through the historic nature preserve.

“This is where I played as a kid,” Hutchinson said. “Very few people get a chance to grow up in a wild, wild place, then 50 years later go back to the same place and it’s still as wild.”

Kristen is a web editor and reporter for WUFT News. She can be reached by calling 352-392-6397 or emailing kaltus@ufl.edu. Follow her on social media @kristenaltus.
Previous Ag. Commissioner Nikki Fried Warns of Widespread Gas-Pump “Skimming” Fraud
Next The Point, March 7, 2019: These Are The Most Prolific Bill Sponsors Of The 2019 Florida Session