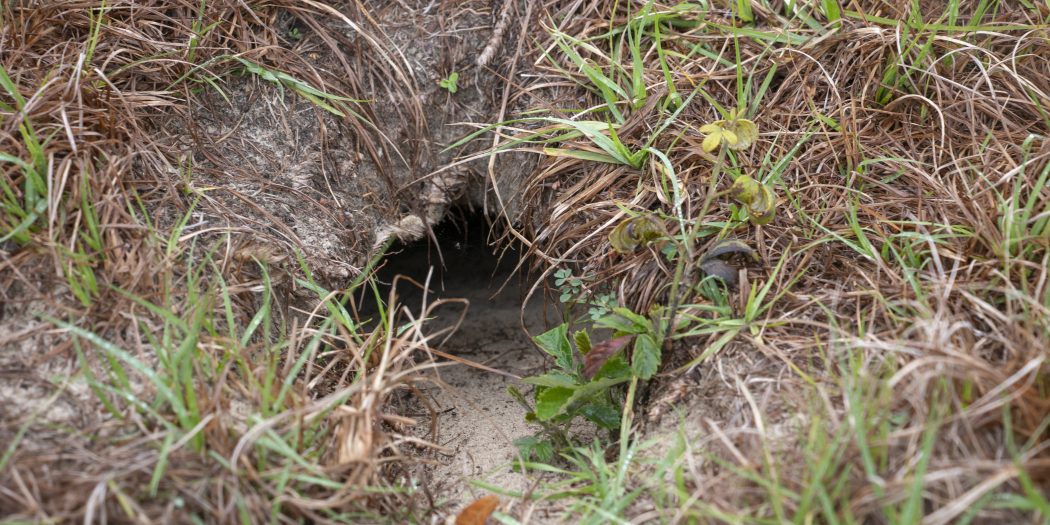 The holes of gopher tortoises can be found throughout the Watermelon Pond Wildlife and Environmental Area in southwest Alachua County. Gopher tortoises are protected in Florida and the addition of 65 acres of property to the county-owned land will continue to give protection to the tortoise population on the property. (Shelbie Eakins/WUFT News)

By Shelbie Eakins and Charles Fenwick

More than $1 million in Wild Spaces Public Places funding will be spent on new conservation land in Alachua County.

The Alachua County Board of Commissioners voted to move forward with the purchase of the four new conservation lands at the meeting held on Feb. 26. The acquisition of the lands was part of the Alachua County Forever project.

The program is funded by the sales tax from the Wild Spaces and Public Places referendum.

These 85 acres are home to gopher tortoises, fox squirrels and quail. These populations are supported in part by the quality ground cover throughout the land.

County Director of Parks and Conservation Charlie Houder urged the commissioners to take the next steps toward buying the property.

“These two properties have gotten the biologists that work in conservation lands very excited,” Houder said.

According to Houder, one of the most attractive features of the land is the quality of its ground cover. Seed is already being harvested from the adjacent 20 acre property already owned by the county. After being harvested, the seeds are used to plant and restore the ground cover on other conservation properties.

Commissioner Mike Byerly was the most vocal about his concerns.

“It’s not that I don’t think it’s a nice piece of land,” Byerly said. “It’s just I think we all need to be very much aware that it’s a finite pot of money. Once the money’s gone, it’s gone.”

Commissioner Robert Hutchinson acknowledged the worries over the price but ultimately believed the purchase would be worth it.

“Someday that 50 or 75 acres will be the cherished place where a few kids get to see nature,” Hutchinson said.

The third property brought before the board was a 113-acre parcel that borders the Barr Hammock Preserve on the northern boundary. The land will become part of the nearly 6,000-acre preserve. This addition will give the county additional control over portions of the levy on property, allowing better management of water levels throughout the preserve.

The fourth and final property brought before the board was 161 acres that are near the Tuscawilla Preserve. The land, covered entirely in timber, features two hills with one reaching elevations of 130 feet.

According to Houder, the wetland area is collecting subsurface drainage from all around the property, sending the water toward Tuscawilla Lake.

“The contribution from this property to Tuscawilla Lake is really what I see as being the outstanding feature here,” Houder said.

Now that the board has decided to move forward with these purchases, final negotiations with the property owners will begin. The estimated closing dates for these properties are scattered throughout July 2019.

Shelbie is a reporter for WUFT News who can be reached by emailing news@wuft.org or calling 352-392-6397.
Previous 2019 Candidate Roundtable: Gainesville Mayor
Next The Point, Feb. 27, 2019: Alachua County Pursues $1M Land Deal For Conservation