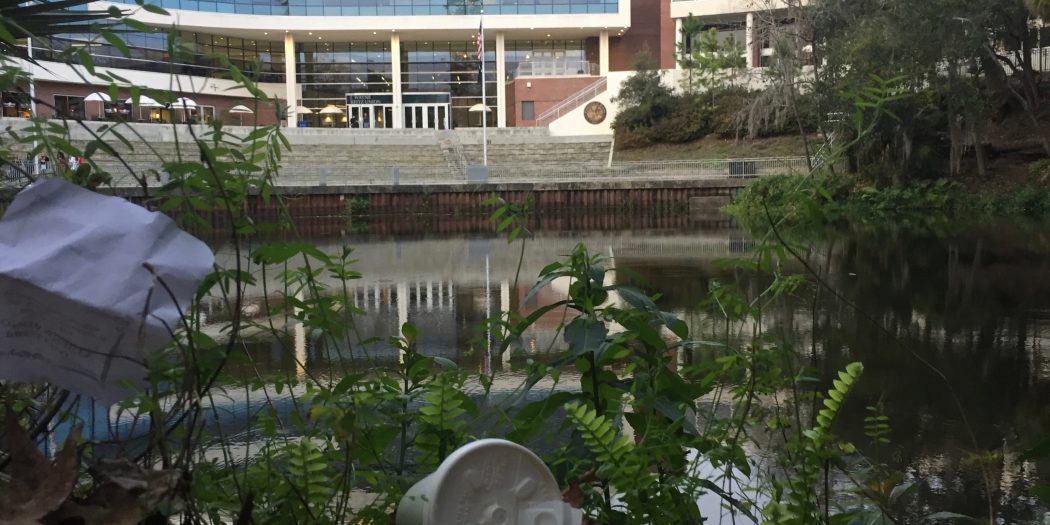 A littered plastic cup and piece of paper sit on the cusp of the Reitz Union pond off Museum Road. (WUFT News/Charles Fenwick)

Gainesville’s plastic ban starting on Aug. 1 will require businesses to purchase and provide new packaging, but some area scientists say the ban should be amended to ensure greater environmental benefits.

On Jan. 17, Gainesville commissioners passed an ordinance prohibiting businesses from distributing single-use plastic bags and expanded polystyrene containers. Expanded polystyrene (EPS) is commonly, but incorrectly, referred to as Styrofoam. According to the ordinance, the ban is meant to encourage the use of reusable, recyclable and compostable alternatives in an attempt to reduce pollutants and litter.

Some local environmental and material scientists agree single-use plastic bags and EPS containers should be regulated, but  they argue that the commission should consider broadening the ban to protect against alternative pollutants.

Maia Patterson McGuire, a Florida Sea Grant agent for UF/IFAS Extension in Flagler and St. Johns counties and the chair of the National Sea Grant Education Network, said she appreciates the commission’s efforts to reduce plastic pollution, but added there is a misconception surrounding “compostable” alternatives.

For a plastic to be certified as “compostable,” it must reach the standard set by the American Society for Testing and Materials (ASTM) and the International Organization for Standardization (ISO), said McGuire, who has a Ph.D. in marine biology and fisheries. The sole standard is “decomposing under the high heat conditions of a commercial or industrial compost facility,” she said.

“Unfortunately, these facilities are not available to Florida residents,” McGuire said. “These plastics that are labeled as compostable ultimately end up either in landfills or in the environment, where they do not biodegrade and where they pose similar environmental risks as petroleum-based plastics.”

Christopher Batich, a UF professor of materials science and engineering, also emailed commissioners to ask them to consider broadening the bill.

“I gather that some stores have started to replace their EPS cups with solid polypropylene which produces a cup three times as heavy,” wrote Batich, who has a Ph.D. in chemistry. “It is unclear to me that this is a wise decision and I ask to consider this change with a broader base of input.”

Batich said he believes it is important that the city look into these potential issues.

Commissioner Harvey Ward said it’s always possible the commission might consider changes in the future, but the only change on the horizon now is an exclusion policy for very small businesses. This idea will be discussed during a meeting in March.

Ward said he recognizes that many “compostable” products may not be as easily compostable in Alachua County’s current landfill conditions. Nonetheless, the commission has already passed the ordinance on both readings, and penalties will go into effect Aug. 1.

Scott Knight, an environmental engineer and vice president and owner of Wetland Solutions Inc., asked the commission in an email to apply a policy that has proven successful in other communities.

“I would recommend what has been a more proven method of encouraging changes in behavior: charging for any disposable bag (paper or plastic),” he said.

The commission’s goal is to encourage the use of reusable bags, Knight said. But what is more likely to occur is an increased use of paper bags that have less visible, but more insidious impacts, including air and water pollution.

Charging for all disposable bags was instituted in the UK and has led to significant reductions in plastic bag use. The UK reduced disposable bag use by 80 to 90 percent by charging about 10 cents per bag, Knight said.

If Gainesville chooses to be aggressive, it could charge 25 cents per bag and expedite the process of lessening the amount of disposable products in the community, he said.

Money raised from such a fee could be used to buy reusable bags for families in need and to pay for environmental projects in the community, Knight suggested. An exemption could be provided to anyone in a food assistance program.

“As a scientist, it pains me to see a bad policy made for perceived environmental benefits,” Knight wrote in his email to commissioners. “Gainesville has a chance to implement a smarter and more innovative program than the bans being rushed through around the country.”

According to the ordinance, single-use plastic bags are characterized as bags provided to customers at the point of sale or distribution for the purpose of transporting items. Additionally, expanded polystyrene containers include plates, bowls, cups, lids, trays, coolers and ice chests.

Gainesville will fine retailers and food service providers $250 per offense.

Charles Fenwick is a reporter for WUFT News. You can reach him at 201-400-2730.
@@cofenwick1
Previous Seniors At Hawthorne Wellness Center Keep Their Minds And Bodies Healthy
Next Feb 14,2019: Morning News in 90