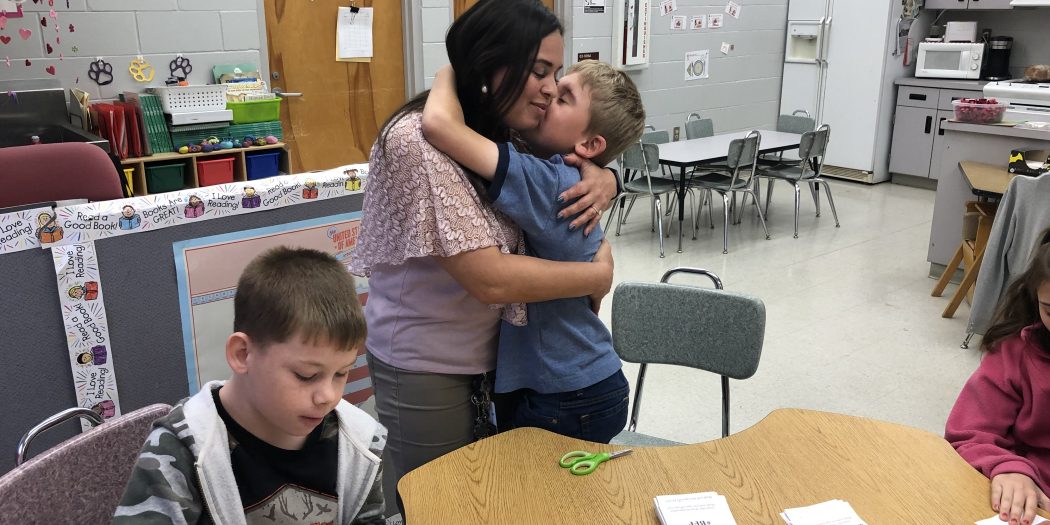 It takes one hour to make four hearts and two hours to make six.

By using a computer software, the students choose various shapes and dimensions for the necklaces. Once they’re finished, they save their design to a file.

Then they transfer the information to a 3D printer in their classroom and press start.

The machine buzzes quietly as it begins molding their plastic designs.

Peggy Sternad teaches this group of children with specific learning challenges. No two are the same. Some of the children have Autism. One is non-verbal and another has Down syndrome.

Sternad is one of five teachers that work with this small group of children.

“My children don’t have disorders, they have challenges,” Sternad said.

Each morning, the students review vocabulary words and days of the week. Phoebe Salyers is one of the children in Sternad’s class who leads the group activities — using sign language.

It takes about two hours for the 3D printer to make six objects at a time. Once it’s finished, Sternad and the other teachers gather the children around a table and begin making the necklaces.

Each child has a specific job; Riley Kallamyer sands the hearts, Rett Rollison and Wyatt Thomas cut the cards, Salyers ties the string and Kaden Rogers puts the completed jewelry piece in a bag.

There are four different designs and three different colors.

Each design has a corresponding card, like a pair of purple hearts that say “BFF,” or a pink spinning heart that says “You make my heart spin.”

The children design and assemble the necklaces all by themselves.

One of the students suggested making the necklaces for Valentine’s Day and the class has been working on the project for a while.

Each necklace is sold for $2. The money goes to buying supplies for their next project and to keep the children engaged in 3D technology.

Sternad said they have made over 200.

But how did nine children in Gilchrist County get access to two 3D printers?

Janalyn Peppel is the programs coordinator for a company called New Technology Made Simple Now.

She was born in Gainesville and graduated from the University of Florida College of Journalism and Communications.

The goal of Peppel’s work is to bring coding, 3D technology and virtual reality to underdeveloped schools and children with intellectual challenges.

“We want everyone to have access to this technology,” Peppel said.

The company is funded through grants but partners with non-profits, with SunState Community Foundation, Inc. being one of their biggest sponsors.

Last year, Peppel brought a 3D printer to Sternad and her students. She taught them the software and tools to make objects on their own.

Merryl Malter is one of the volunteers who works with Peppel. She has been a computed tomography technician for 12 years, and works with virtual reality.

When asked about the future of virtual reality, Malter said it’s endless and allows the children to build social skills in a different way.

“It opens up their creativity,” Malter said.

Not only that, but it calms them, according to Sternad. She recalled a time where Jaxson Maybury, one of her students, sat in front of the 3D printer and watched it make his object.

Because Maybury and some of the other children have Autism, Sternad said the quiet humming and buzzing of the printer intrigues them.

They are sensitive to loud noises and the printer keeps them at ease.

In October, the students made pumpkins in different sizes and shapes. They also made pink chess pieces and a frog. Still, fun shapes and animals aren’t the only objects they have made in 3D.

Sternad says that her some of children struggle holding common objects like pencils, spoons and scissors, so they used the printer to create adaptive tools to help them grip these objects.

One tool they made was for a spoon so her students could eat their food easily and not tremble when they tried holding it.

Despite these challenges, Sternad is confident that her students will continue to excel in this new world of technology.

Sternad said she and the other teachers will continue to help the children blossom and grow.

“We want people to see them for who they truly are,” Sternad said.

Xoe is a reporter for WUFT News who can be reached by calling 352-392-6397 or emailing news@wuft.org.
Previous Devil’s Millhopper Geological State Park Continues To Serve Gainesville Locals Despite Construction
Next The Point, Feb. 14, 2019: State Representative Threatens Closure Of UCF, Then Walks Idea Back As ‘Hyperbole’