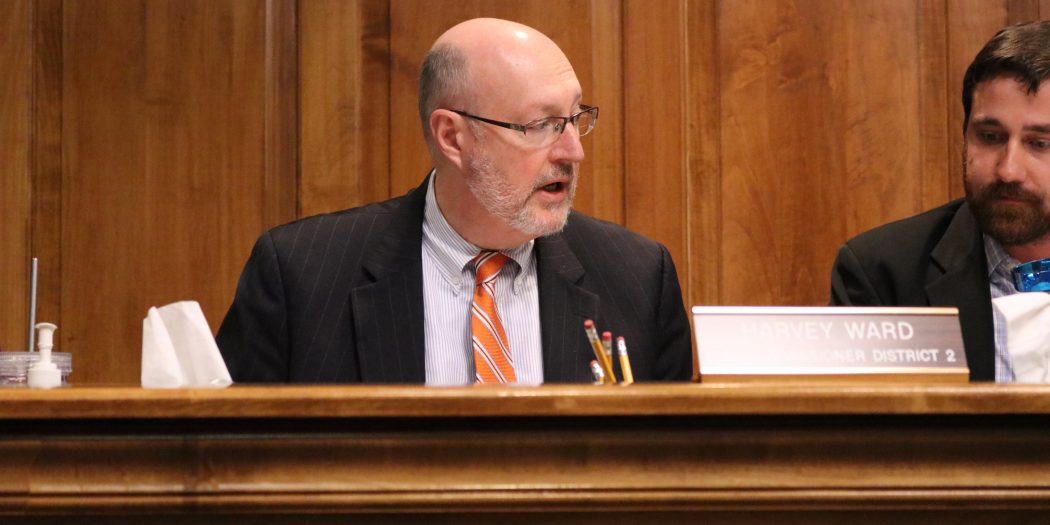 Commissioners Harvey Ward and Adrian Hayes-Santos in 2019. The city manager’s office is currently working on a new business plan and proposal outlining what the city might do next. (Jacob Berkowitz/WUFT News)

Gainesville City Commission Votes To End Use Of Inmate Labor

Across the country, inmates in orange jumpsuits sweat and slog away for less than a dollar per hour. In Florida, they work without pay — picking up litter, erasing graffiti and mowing grass under the sun.

But not for much longer, at least not in Gainesville or Alachua County.

In a general policy committee meeting at the GRU’s Multi-Purpose Room, Gainesville City Commissioners decided to terminate three contracts with the Florida Department of Corrections in a 5-1 vote on Thursday. In 30 days, inmate labor will be gone from Gainesville.

“It’s a moral issue,” said Commissioner Gail Johnson. “We’re talking about human lives here. We’re talking about a systemic issue that we are directly taking part in every day. Many times, we make decisions here based on what is right, what we should do for our community. But it’s also because we want to be a leader, not just in our immediate area, but in the United States.”

The city had already been preparing to end the contracts with the DOC on Oct. 1. The commission’s decision will accelerate the process.

Inmate crews will be replaced mostly with contractors initially, but the city intends to make more permanent hires over time.

Gainesville city staff estimates the decision to end inmate labor will ultimately cost $654,000 per fiscal year and approximately $50,000 per month that has not been budgeted for this fiscal year, Assistant City Manager Daniel Hoffman said.

He added that a reduction in services, such as removing debris from parks less frequently, was likely.

It was this financial impact and the reduction of services that concerned Commissioners Harvey Ward and Adrian Hayes-Santos. They both expressed a desire to wait until Oct. 1 of the fiscal year to terminate the city’s contracts with the DOC.

Commissioner David Arreola helped to assuage some of their concerns. Arreola, who brought the motion to the floor, noted the interim city manager’s memo, which stated the city staff has already identified options where the funds will come from. The only issue is it has not yet been budgeted for, he said.

Mayor Lauren Poe was also worried about placing additional stress on the city’s budget. He feared the extra expenditures would result in unpredictable consequences for Gainesville.

“It’s a tough situation,” he said. But he agreed with commissioners Johnson and Arreola that the moral costs outweighed the financial ones.

“We do not treat people humanely in our prisons and for us to benefit off of their labor in this way is unconscionable,” he said.

The NCFLC is part of the Florida American Federation of Labor and Congress of Industrial Organizations (AFL-CIO) and oversees 12 counties in North-Central Florida, including Alachua.

Commissioner Arreola agreed with both the moral and business aspects of the commission’s decision.

“We’re at a time in our country where we’re finally waking up to a lot of the longstanding, unfair practices that our country has been involved in. One of those is the use of highly, highly discounted prison labor. How can you in a free market expect free market labor to compete with reduced-cost prison labor? That’s not free market. It was a principled vote and I’m glad my colleagues felt the same,” he said.