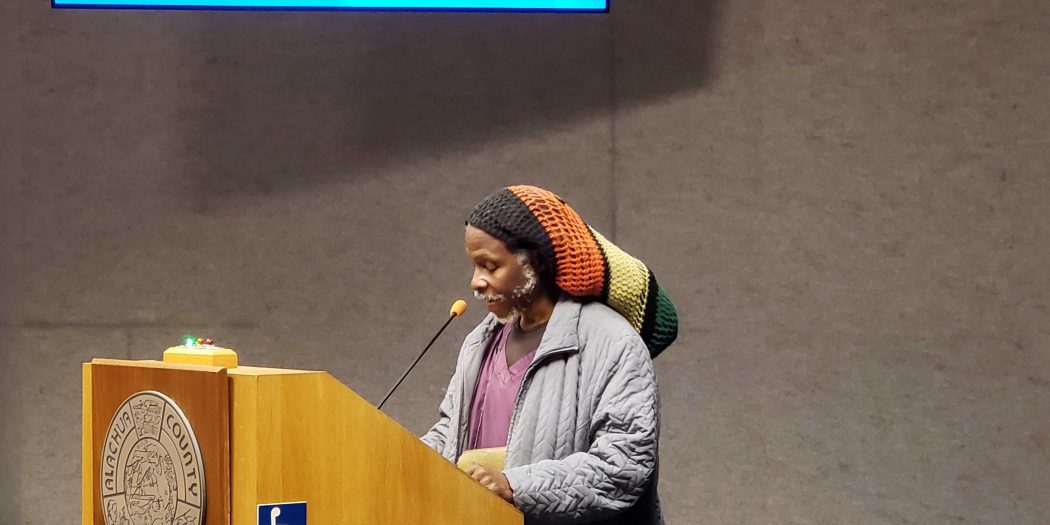 "I'm not proud of getting something from nothing," Kali Richard Blount said Tuesday evening during public comment. He was in favor of the county sticking with its decision to not use inmate labor from the Florida Department of Corrections. (Alexandra Camargo/WUFT News)

Alachua County commissioners have decided to stand by their policy change from last month and no longer use the labor of Florida state prison inmates.

The Alachua County Board of County Commissioners voted five to zero on Tuesday evening to no longer use their labor. The issue was re-addressed after Commissioner Mike Byerly missed a vote on Dec. 13 and asked that his fellow commissioners reconsider it.

Byerly said he found out about the vote from the Gainesville Iguana and was surprised about the motion because it was not on the Dec. 13 agenda. He left the December meeting early, thinking that there was nothing else that needed to be addressed.

“I’m not for it or against it,” he said during Tuesday’s meeting. “We do not do government like this. It’s not just.”

Byerly said Tuesday he doesn’t think the county should stop using prison labor, but instead work to improve it.

He motioned for the staff to:

The commission approved Byerly’s motion along with Commissioner Ken Cornell’s request to approve 20 full-time labor employees at a cost of approximately $500,000, with four of the positions dedicated to stormwater maintenance at an approximate cost of $100,000 and to authorize the advertisement and hiring of new employees.

Commissioner Robert Hutchinson said he was concerned about a lack of transparency from the DOC, and he would like for the county to focus on groups involved in society reentry efforts, so the DOC can give released inmates a “pipeline” to a real job.

“The millions of dollars doesn’t scare me,” he said.

Stacy Scott, public defender for the 8th Judicial Circuit, said she was denied access to speak to current inmates who are a part of the Work Camps.

She told commissioners she spoke to multiple former inmates who participated in the Work Camps, and they described the program as their “escape.”

Still, they did complain that the amount of food provided wasn’t enough for the work they were doing, there was no pay, and their time in prison did not get reduced.

The DOC on Wednesday provided a statement in response to a written list of questions regarding Tuesday’s decision in Alachua County:

Inmates not utilized by a county or city perform work assignments at the institution or for other local entities. The Department’s work squads teach inmates important job skills and provide valuable assistance to the state and local communities and significant cost savings to Florida taxpayers.

The Department does not profit off contracts for inmate work squads. The money the Department is paid for work squads enables their operation and supervision. Their payment covers the cost of transportation, staff supervision, safety equipment, and communication devices. This is standard in all work squad contracts.

Advocacy groups such as Incarcerated Workers Organizing Committee (IWOC) and Fight Toxic Prisons were represented in the meeting. Ryan Thomson, a University of Florida student and IWOC member, said he spoke to five inmates and provided a video that included audio from a former inmate, Christopher J. Rehse, sharing his experience at the Gainesville Work Camp.

Rehse called the prison guards “slave drivers,” who often pick on inmates. He also said some inmates smuggle in drugs and other unauthorized items into the compound.

Thomson informed the commissioners that he spoke to five inmates and was only able to speak to them because he camped outside the DOC’s Gainesville Work Camp.

The inmates approached the campers and shared their experience from the Gainesville Work Camp, but they asked to remain anonymous.