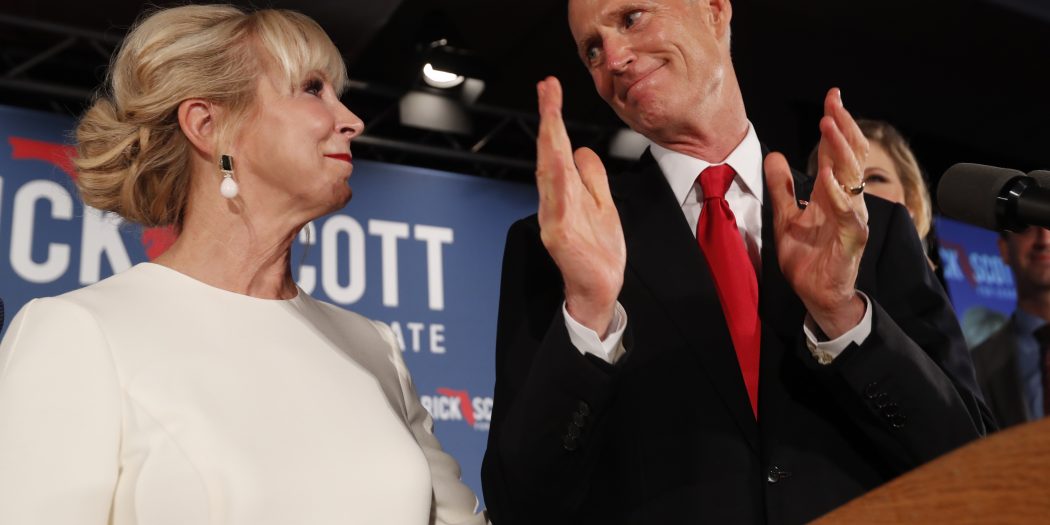 Scott To Step Aside From Canvassing Board

Gov. Rick Scott intends to recuse himself from a state panel that is scheduled next week to certify the results of Florida’s 2018 elections, the governor’s lawyer told a federal judge Wednesday.

Scott’s decision to step aside from the Elections Canvassing Commission came as he is locked in a recount in his bid to unseat Democratic U.S. Sen. Bill Nelson. Democrats have alleged that Scott has improperly tried to use his authority as governor to influence the recount, which could decide his political future.

The Republican governor held a slim lead in unofficial results from the Nov. 6 election, with the results of a machine recount due by 3 p.m. Thursday and a manual, or hand, recount expected to follow.

The heated contest is the subject of several federal lawsuits filed in recent days by Nelson and Democratic organizations. Those lawsuits focus on issues such as which ballots can be counted, when ballots have to be received by elections supervisors, the manner in which ballots are determined to be legitimate and whether deadlines for recounts should be postponed.

In another lawsuit, the League of Women Voters of Florida and Common Cause are asking Scott to recuse himself from the elections process.

But Daniel Nordby, Scott’s general counsel, told U.S. District Judge Mark Walker on Wednesday that the governor will step aside as a member of the state Elections Canvassing Commission on Tuesday, when the panel is slated to meet to certify the election results.

Nordby said state law sets out a process to determine a replacement for the governor, and that process is ongoing.

“But Gov. Scott would not intend to serve as a member of the canvassing commission, which seemed to underlie, to a great extent, the relief that was sought by the plaintiffs in the case. This, from our perspective, seems to be a non-issue,” Nordby, who represents Scott in his official capacity as governor and not as a candidate for the federal office, said during a telephone hearing.

Nordby also said Scott has little to do with the elections process, which is run by the state’s 67 county supervisors, nearly all of whom are elected.

“Neither the governor nor the state agencies under his control actually process or count any ballots,” Nordby said. “That seems … something that is not appropriately before the court.”

But Walker told Nordby he needed to respond to allegations that there is “imminent danger of him (Scott) directing others to seize machines, investigate, disrupt the recount process.”

“It seems to me that’s the nub of this case,” the judge said.

Scott saw his 56,000-vote election-night lead over Nelson dwindle to fewer than 13,000 votes, as ballots continued to be tallied in the days following the election, particularly in Broward, Palm Beach and Miami-Dade counties.

The governor has publicly blasted elections chiefs in Palm Beach and Broward counties and asked the Florida Department of Law Enforcement to investigate possible wrongdoing. So far, no courts or state agencies have found any fraud.

Larry Robbins, a lawyer representing the plaintiffs during Wednesday’s hearing, told the judge the voting-rights groups want to make sure Scott ceases “any involvement directly or indirectly” with county canvassing boards, including through claims about purported fraud and suggestions that members of the Florida Department of Law Enforcement be dispatched to oversee the canvassing process.

The plaintiffs also want Scott to recuse himself from exercising his executive authority to remove or suspend county canvassing board members, comprised of supervisors of elections, judges and county commissioners.

Robbins said the plaintiffs also want the court to appoint a “neutral third party” to replace Scott on the elections canvassing commission, rather than a member of the Florida Cabinet.

Walker ordered an expedited schedule for briefs to be filed in the case and scheduled a hearing that would be held at 1 p.m. Thursday if needed.

He noted that the court and lawyers are racing against next Tuesday’s certification deadline and against the Thursday deadline for machine recounts to be reported to the state. After the machine recounts, races with margins of 0.25 percent or less will go to manual recounts. Results from the manual recounts, which are expected to include the Scott-Nelson contest, are due at noon Sunday.

“As a lawyer I worked all night sometimes, and as a judge, I certainly do,” he said.

“If I had a dollar for every time I’ve missed a graduation of one of my children, or a vacation or spring break” due to a judicial emergency, Walker said, “that alone would supplement my retirement.”

The News Service of Florida is a wire service to which WUFT News subscribes.
Previous Gainesville Veteran Cycling To Raise Money For Memorials
Next Nov. 14, 2018: Afternoon News in 90