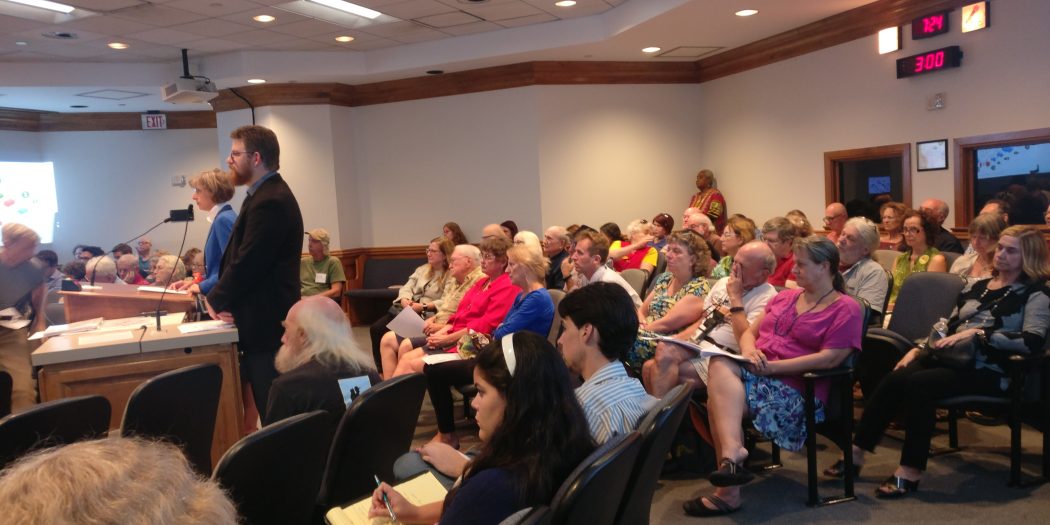 About 60 people gathered into the City Commission Auditorium Thursday evening to air their grievances regarding the city of Gainesville’s proposed comprehensive plan to bring affordable housing to the city.

Residents and city commissioners spoke for three and a half hours regarding the issue, with a final compromise — a second delay of the vote until late November — not coming until 10 p.m., as the two groups discussed the best method for the plan’s implementation.

Wendy Thomas, the director of the city’s Department of Doing, and Andrew Persons, the principal planner, started off the 6:30 meeting by showcasing to those in attendance their plan for an ever-rapidly expanding city of Gainesville. Thomas noted the need for increased affordable housing, with more than 4,000 people currently on the Housing Authority Waiting List.

The plan, known as GNV R.I.S.E., aims to bring affordable housing to the city of Gainesville through providing incentives to developers. “R.I.S.E.” stands for “Resilient, Innovative, Sustainable, and Equitable” and is meant to bring greater housing density to the Gainesville area. This would allow for buildings to exceed the current maximum limit of units/acres otherwise established. This plan would not make any changes to the current standards set in place for the height of the buildings, but instead would allow for homes to be either sectioned off into multiple-family homes or allow for homes to be torn down and multi-family homes such as duplexes to be established in their place.

The plan left wary those residents in attendance, as they have asked in the past for clarity and more community input to the plan to ensure that the changes that would go into place have the best intentions of the people currently in Gainesville. Citizens explained that the plan seemed to be sacrificing the feeling of ‘old’ Gainesville in the name of those who can profit off of new buildings being established.

More than a dozen members of the public gathered in a line to get a chance to speak to the city commission.

“We wouldn’t need to have this meeting if you had listened to us before,” said Faye Williams, founder of Alachua County Peace Coalition. “Believe in us.”

The City Commission voted unanimously to push back the vote on moving the comprehensive plan forward until Nov. 29, with another possibility of continued discussion if needed occurring at a later date. Part of this delay is to ensure that residents are entirely informed by the changes that will be occurring throughout the city if this plan goes through, as well as making sure the feedback they receive from those throughout the community helps shape the plan at a level equal to the work of city employees who draft the Comprehensive Plan.

“Don’t think of us as the enemy,” Commissioner Harvey Ward said. “We’re your neighbors, your friends, we see you at the grocery store. We don’t want to be D.C., we don’t want to be Congress… We want to work together.”

Four community meetings are in place — Oct. 29 and 30, Nov. 5 and 7, all from 4 to 7 p.m. — with another meeting in the works for an early afternoon weekend date. The commission plans on using these meetings to get into the communities that will be impacted by this plan and help eliminate grievances that members of the community say they have about not being heard.

Brett is a reporter for WUFT News who can be reached by calling 352-392-6397 or emailing news@wuft.org.
Previous Oct. 18, 2018: Afternoon News In 90
Next A Conversation With James Lawrence On GNV4All’s Progress