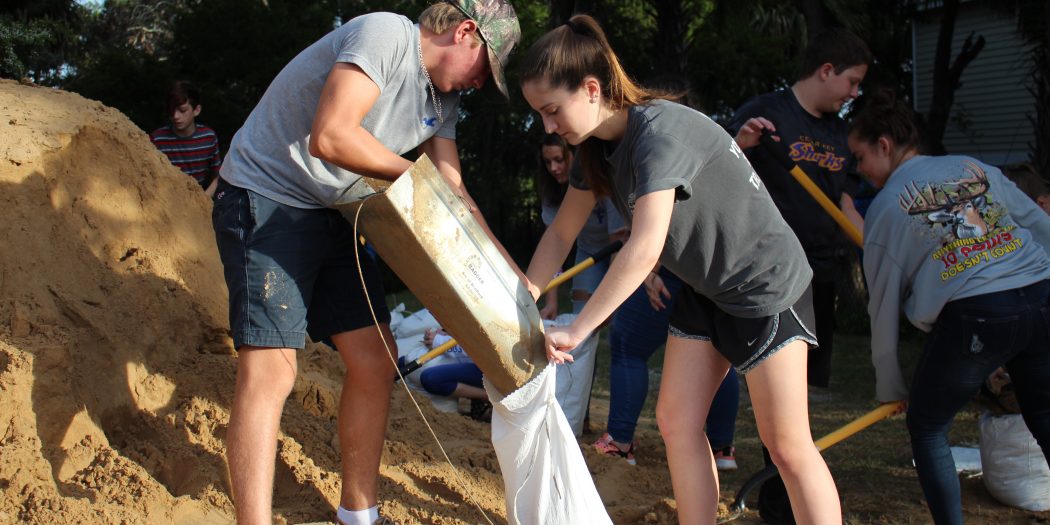 Cedar Keyers Prepare For Michael With Hermine In Mind

Cedar Key’s approximately 700 residents can drive from one side of the coastal town to the other in less than 10 minutes.

The locals are family. Neighbors help each other.

Two years ago, Hurricane Hermine left parts of the seaside town in six feet of storm surge flooding. Most businesses and homes that were damaged have only recently finished repairs.

“There was tons of water everywhere after Hermine; everyone’s furniture, pictures, entire lives were out on the streets,” said Alexis Lipscone, a ninth-grader at Cedar Key School. “The town’s destruction was devastating, but it was great community bonding. This time around, everyone’s helping each other board windows and just coming together.”

While the students prepared sandbags, Frank Wellinger, co-owner of the Low-Key Hideaway motel, began sealing off doors with duct tape.  Wellinger said when Hermine struck in 2016, the motel’s rooms filled with about 3 feet of water and all cabinets and furniture had to be replaced.

“About a dozen people have offered to help us prepare for the storm, but I’ve turned them down,” Wellinger said. “There’s other people that could use the help more than us.”

Cathy Allen, a longtime friend of Wellinger who regularly comes by the motel to help clean rooms, and her husband drove back and forth from downtown stopping to help anyone who needed an extra hand.

“We’ve helped people put up shutters, we’ve helped move stuff on top of boxes and milk crates,” she said. “We had one elderly man in the hospital, so we had to make individual trips moving his golf carts and trailers to higher ground.”

The city closed for mandatory evacuation at 5 p.m. Michael is expected to make landfall Wednesday afternoon. Until then, the local islanders can only wait and hope they are better prepared.

“It’s like a big family more than just a community,” Allen said. “Everyone looks out for each other’s neighbors.”

Alexandria Ng is a reporter for the WUFT newsroom. She can be reached at 954-415-3713 or by email alexandriang@ufl.edu.
@@alexandriang00
Previous Steinhatchee Marinas Prepare For The Worst With Hurricane Michael
Next Public Works Department Set To Begin Next Phase of ‘Trans4ming East GNV’ Project