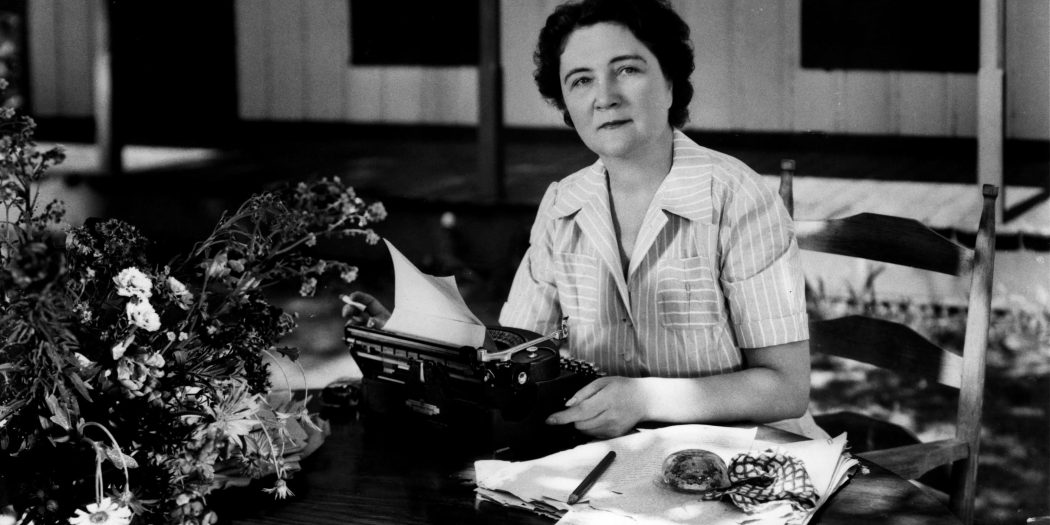 Rawlings’ home was named a National Historic Landmark in 2007, and in 2009 she was honored as a First Floridian by Gov. Charlie Crist. (Courtesy of University of Florida George A. Smathers Special and Area Studies Collections

Cross Creek is one of the renowned small-towns that dot Florida’s historical map.  And this month that dot might shine a little brighter with the release of a documentary film celebrating the woman who made it a landmark — Marjorie Kinnan Rawlings.

“Here is Home: Marjorie Kinnan Rawlings and Cross Creek” is a short-form documentary film by Sonya Doctorian that paints the vivid memories of the author from elders of Cross Creek.  The documentary premieres Oct. 12 at 6:30 p.m. in the Matheson History Museum in Gainesville.

“It’s about a person who lived a remarkable life, and I want to preserve and extend her legacy,” Doctorian said, a filmmaker and photojournalist.

Rawlings brought Cross Creek into the limelight in 1939 when her novel “The Yearling” earned a Pulitzer Prize. She wrote the novel while living in Cross Creek, and the rural southern town served as the novel’s setting as well. Three years later, Rawlings wrote a memoir and titled it “Cross Creek” after the town that she called home.

Yet despite the acclaim Rawlings received from her novels, Doctorian didn’t expect to hear so much about the great kindness and empathy that she held for the Cross Creek community. She had a heart for her neighbors and was more than willing to jump in to help others, Doctorian said.

The filmmaker noticed this void in Rawlings’ legacy during a visit to the author’s home in 2017 and realized she could fill the gap herself.  Doctorian said her goal for “Here is Home” was to chronicle the relationships Rawlings created within the community.  After a process of grant applications, archive research and locals’ conversations, the project began last year.

Doctorian surveyed the people of Cross Creek who have close connections to Rawlings and grew up hearing stories about the award-winning author. Doctorian interviewed neighbors and family friends who could share stories of Rawlings’ kindness to her community.

“These elders remember that sense of community – that sort of time when they knew each other and pulled together,” Doctorian said.

Decades after her death, their memories are still bright and capture Rawlings’ kind character, Doctorian said.  During her interviews, citizens cited stories like how Rawlings delivered baskets to families on Christmas day and roasted full turkeys for families in-need.

“She was trying to capture a place in time, and that’s what I do with documentaries,” Doctorian said. “We live in a world of impermanence, and a documentary can capture and preserve disappearing resources, like the elders who I interviewed.”

Rawlings’ past letters to other authors, book editors and friends add to the community relationship during her life. For four and a half years, author Ann McCutchan researched Rawlings’ extensive collection of letters.  McCutchan said the letters are paramount to her book, “The Life She Wished to Live: A Biography of Marjorie Kinnan Rawlings, author of ‘The Yearling’,”

“I’m not just quoting her, but hearing out her relationships with other people,” McCutchan said.

McCutchan hopes the biography will enlighten readers on Rawlings’ life and inspire renewed interest in her works.  Part of the book will be read at the Oct. 12 documentary premiere.

When Rawlings moved from upstate New York to north Florida in 1928, she was considered a “Yankee” by the standards of her new neighbors in Cross Creek, said Barbara Wingo, president of the The Friends of Marjorie Kinnan Rawlings Farm, Inc.. Rawlings and her husband purchased a 72-acre farm with an orange grove between two large north-central Florida lakes.

Wingo’s organization helps preserve Rawlings’ home and farm as a National Historic Landmark through the Florida Park Service. She said the home attracts thousands of visitors each year, and she hopes the documentary will give viewers a feel for the environment that Rawlings loved.

“I hope that they can appreciate her work and why the state of Florida has decided to preserve this slice of land of hers and why it’s a national historic landmark,” Wingo said. “[Rawlings] managed to capture the dialect and ways of people around her so well.”

For Doctorian, it was important to capture the oral history of those who knew Rawlings and to reflect life on a working farm from another era.

Taylor Girtman is a reporter for WUFT News. She can be contacted at news@wuft.org or by calling 352-392-6397.
Previous Andrew Gillum’s High School Adviser Predicted Years Ago He Would Be Florida’s Governor
Next Oct. 4, 2018: Afternoon News In 90