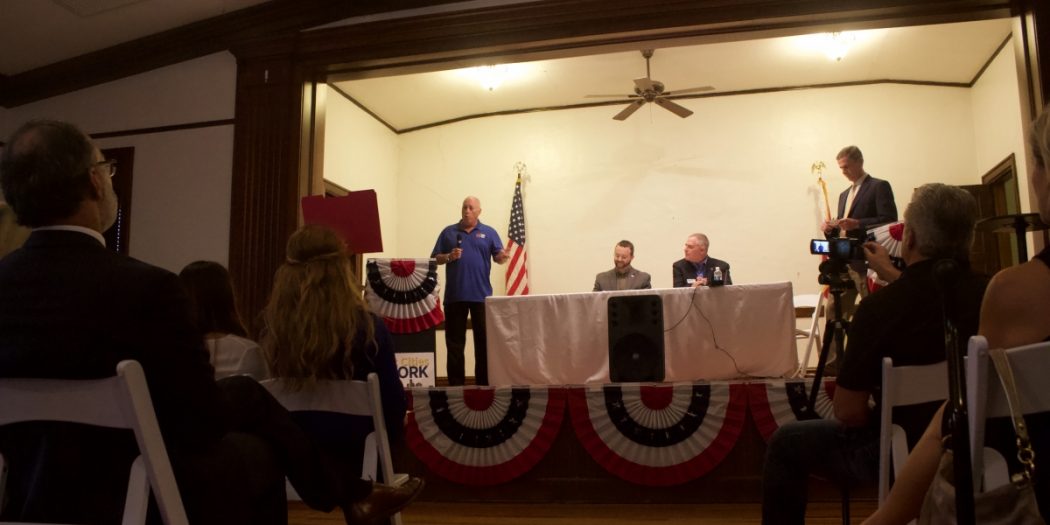 Florida is no stranger to high-stakes, high-profile elections.

And with less than two months until election day, another is around the corner in November.

Andrew Gillum’s victory over former congresswoman Gwen Graham reaffirmed that notion, making the state’s first black gubernatorial nomination and upending the battle for the governorship in November. The historic upset is coupled with over 1.5 million Democrats casting a ballot last month – an 81 percent increase since 2014.

The possibility of a “blue wave” in Florida has emerged, but Republicans don’t plan on taking the news lying down. With more than 1.6 million Republicans voting in a state that favored President Trump in 2016, the GOP seeks to prevent Democrats from taking back Congress in 2018

Regardless of party affiliation, turnout is everything this November. With less than two months until election day, primary winners are scrambling to rally support for their candidacy in one of Florida’s most pivotal midterm elections.

Over 50,000 Alachua County voters took to the polls last month, the county’s highest record turnout in a Florida primary since 2004. Over 28 percent of registered voters participated in the election, a 9 percent increase since 2014 (19.53 percent).

Among those who voted, Democrat turnout (30,156) for the governorship exceeded Republican turnout (14,629) two-to-one. The trend in Democrat turnout was steady throughout most partisan races in Alachua County.

Ward Scott, write-in candidate for the Alachua County Commission’s District 2 seat, expressed his frustration with the possibility of a Democrat midterm victory during a Sept. 6 candidate forum at the Newberry Municipal Building.

“You can pick one of us, and then you’re gonna go up against the [Democrat] machine,” Scott said. “I’ll tell you right now, the machine is a serious entity in [Alachua County].”

Scott’s name will not appear on the ballot, requiring supporters to write in his name. The former Santa Fe College professor and radio host joins Democrat Marihelen Wheeler, Libertarian Gregory Caudill and independent Scott Costello on the ballot for the county commissioner seat.

Caudill, who was optimistic after Andrew Gillum’s upset victory, said the primary results will open up a new demographic that may cater to the Libertarian party in November. Caudill plans on targeting voters outside of Gainesville to build up support for his candidacy despite having lower campaign contributions than some of his opponents.

“We don’t necessarily have the budget that some of the other campaigns have had, and we don’t think that’s a problem,” Caudill said. “The thing that’s gonna make a difference is not how many elected officials say they’re gonna vote for you. It’s how many voters are going to vote for you.”

Wheeler, who bested primary challenger Randy Wells to secure the Democratic nomination, said she was optimistic about her chances in November amid a heavy financial battle against Costello.

“I’m excited and ready to go,” Wheeler said. “We can finally unite our Democratic folks because it’s been a tricky campaign. There were so many good Democratic candidates, but now we’re ready to move forward.”

Although Alachua County turnout favors Democratic candidates in November, the same can be said for Republicans outside the county. In the race for Florida’s Congressional District 3 seat – a district encompassing Alachua, Bradford, Clay, Marion, Putnam and Union counties – primary turnout favored Republican incumbent Ted Yoho, who will defend his seat against Democrat challenger Yvonne Hinson.

Hinson, who edged out 17,740 votes to Yoho’s 12,321 in Alachua County, faces an uphill battle against the sitting incumbent, who earned at least twice as many votes in the other five counties. Upon recuperating from the primary election, Hinson said she wants to join a coordinated campaign with the Florida Democratic Party in hopes of targeting voters from all six counties.

“I think we will still have some ground to cover in Alachua, but not as much as north Marion, Clay, Putnam, Bradford and Union,” Hinson said.

Hinson was not in attendance during the candidate forum Wednesday night, but Jarrod Rodriguez, an intern with Ted Yoho’s campaign, gave a pre-written speech by Rep. Yoho during the forum. Rodriguez said Yoho’s campaign was excited about their chances but would be working hard to retain the congressional seat this November.

“For the campaign, just speaking with the congressman, we never try to think that we have [the election] in the bag,” Rodriguez said. “We try to play it safe, so we’re gonna be out there campaigning hard, but we’re optimistic too.”

Angel is a reporter with WUFT News and the Production Manager for GHQ – a top-40 radio station based out of the University of Florida. Angel can be reached at 813-810-6742 or by emailing angel.kennedy@ufl.edu.
@mrkennedya
Previous Florida Voices: Jon DeCarmine | Finding Homes For The Homeless
Next Sept. 17, 2018. Morning News In 90