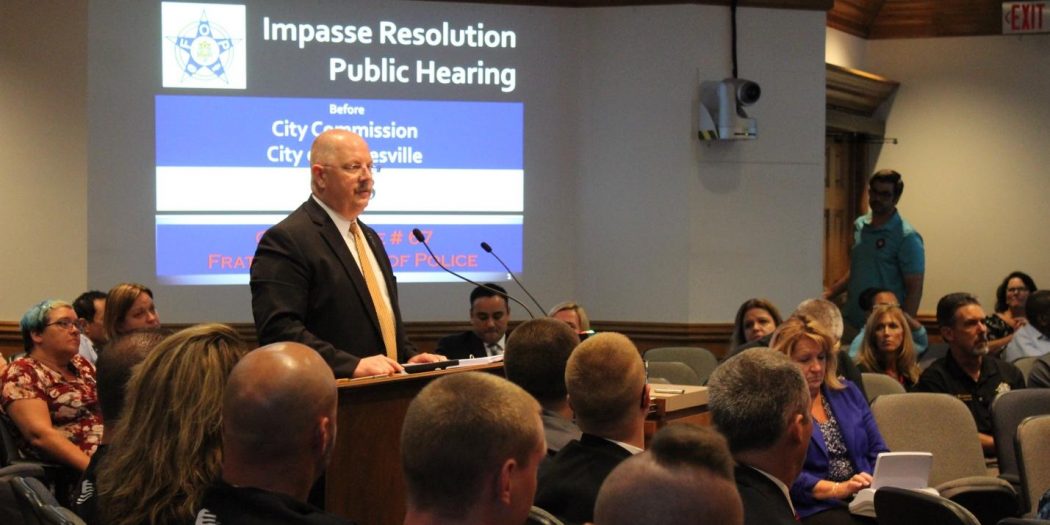 The turnout at Gainesville City Hall supporting the Fraternal Order of Police required live feeds of the City Commission meeting be shown on TVs in the lobby and throughout the basement.

From Police Chief Tony Jones to longtime residents to people who encounter police officers as part of their work, for two hours Friday evening they lobbied the commission to side with FOP Gator Lodge 67 in the nearly two-year contract negotiations impasse.

“The officers need help,” Jones said as dozens of them looked on wearing “Back the Blue” T-shirts. “You wouldn’t see them here tonight if they didn’t need help. We got to reach a decision tonight. We have to pull the department back together.”

After presentations from representatives of the union and city management as well as the extensive public comment, the commission voted 4-3 to change officer’s work schedules and implement a one-time payment of $800 combined with a flat-rate wage increase every year. The increase would amount to a total of 6 percent over the contract period, 2016-19.

That meant that the commission sided with the city management on the key issues of wages and hours of work. It in particular decided against creating, as the union wanted, a step plan corresponding to years of service and a salary increase of about 2 percent per step.

However, the commission endorsed the FOP’s proposal concerning overtime and benefits, as well as offering clothing allowances each year of the contract.

“We are very disappointed in the city commission tonight,” FOP spokesperson Matt Goeckel, said afterward. “They could have chosen something more equitable, as far as pay, rather than what the city offered, which was really just a slap in the face.”

“We have a unique responsibility to make decisions on the livelihood of every employee of the city – whether it is police officers, firefighters or GRU linemen,” Arreola said. “In my mind, I was trying to be as fair and judicious as possible.”

The meeting lasted about 10 hours.

Jamie Saunders, 32, a therapist at Child Advocacy Center on University Avenue, said she has a deep connection with police by working with children who are victims of trauma and abuse.

“I just wanted to support our great officers,” Saunders said. “They have a really important job and a lot of it is life and death for many them.”

Police Lt. Mike Schibuola told the commission that management saying crime was down during its presentation was untrue. He also said that staffing in the department is a problem.

“We are at crisis levels,” Schibuola said. “As a lieutenant, I can tell you we are having staffing issues and that is why crime is up, traffic stops are down and arrests are down.”

Jill Nash, a Gainesville resident since 1979, cited the events in her life when she needed the police, and then urged the commission to exceed what the FOP had requested.

After the vote, Dejeon Cain, a former candidate for the city commission who was once a technician for the University of Florida Police Department, said he believed that the union had made some progress, but that the message was lost.

“I felt the outcome was moving us somewhere, but I really think our city commission doesn’t get it,” Cain said.